One From The History Books: An Evening At Smitty's

In a much older post I talked about a show I had (Surfacing) at the Next II Gallery in New Orleans back in 2005.  In that post, I had a link to a separate (now defunct) website where I described the experience(s) that lead to me making An Evening At Smitty's shortly after Hurricane Katrina bulldozed its way through Louisiana and Alabama.  I thought that I would re-post the backstory here on the anniversary of Katrina back in August. 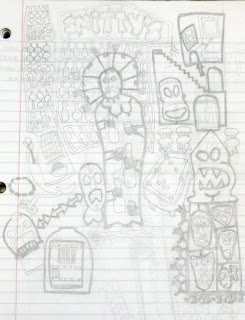 Back in 2005, my show Surfacing was at The Next II Gallery in New Orleans.  You can read about the gallery and its neighborhood here.  On August 29th Hurricane Katrina and the subsequent flooding after the levees failed caused The Next II Gallery, and the rest of the city to flood.

In mid-November, I went down there with my friends to see what wee could salvage from their home and the gallery.  Power was slowly being restored to New Orleans, but that process was nowhere near complete.  Next II was located at the intersection of St. Roch and Maranais and it was the only 'corner' out of the four to have power.  The gallery literally was sitting at the edge of the area that had power.  At night, beyond that corner, was just the dark silhouettes of water-logged buildings, flooded-out cars and mounds of haphazardly piled debris.  There were people in that area of town, but as soon as the sun went down, they dwelled in the murky darkness. 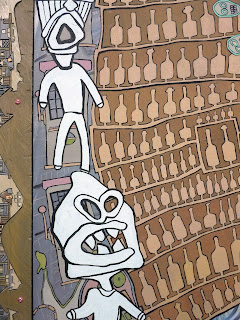 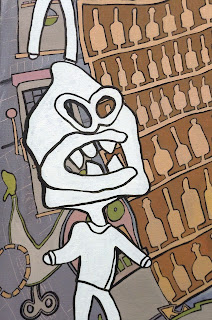 If you headed in the opposite direction from that intersection, you wound up traveling slightly uphill and away from the devastating flooding.  The first establishment were you could find food, 'groceries', and some semblance of nightlife was 'Smitty's'.

Smitty's struck me as a 21st-century version of a wild west saloon in some lawless frontier town.  There were alot of understandably dispirited patrons swilling drinks, smoking smokes, and partaking in other enterprises of a less savory (and less legal) nature.  It took me a few moments to realize that the sum total of women in Smitty's that night was two.  To describe this feminine duo as 'plain' would be mostly accurate and highly polite.  But their lack of comeliness was no deterrent to the dingy, ever-more inebriated clientele that was watching them with the intensity of pack of wolves staring at a wounded stag. 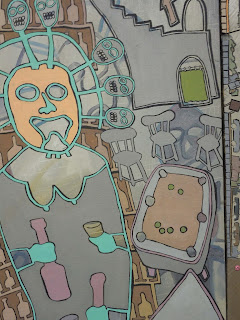 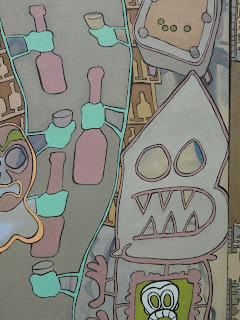 I also wanted to capture some of my impressions of New Orleans itself after the hurricane.  Some of the older (and more well-to-do) parts of town were built on slightly higher ground and escaped the flooding nearly unscathed.  Other neighborhoods, that had been flooded, were various shades of a brownish-gray coating of mud (and probably other things as well).  Many places literally bore the 'line' of how high the water rose.

So on the frame for An Evening At Smitty's, I have a line which demarcates the colorful (nearly unscathed areas) from the brownish-gray flooded areas.  I wanted to capture some of my impressions at the disparity between the rough/ugly flooded areas and the still colorful parts of town.  Essentially I set out to make an ugly* frame, and succeeded. 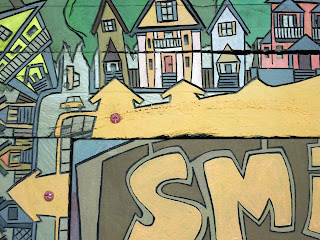 *Note to aspiring artists: You have no one to blame but yourself when you set out to make something ugly and you actually succeed in making something ugly.  The ugliness of this frame has always bothered me. 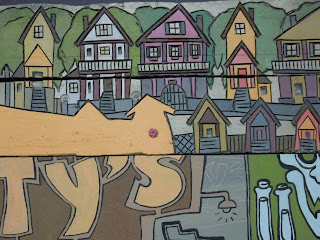 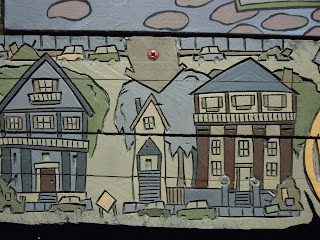 All of the buildings had a circle with an 'X' spray painted on the outside.  In each of the quadrants that are formed by the 'X', were a series of letters or numbers.  They indicated what 'crew' came to the building, whether they entered the building or not, what date they were there, and the number of bodies found inside.  I suspect that in 100 years or so, the ubiquitous circle with an 'X' will have found its way into the wrought iron architecture of the city -with few of its current inhabitants aware of its original meaning. 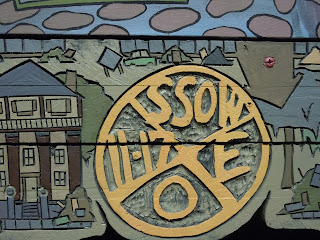 There you have the abbreviated story behind An Evening At Smitty's. 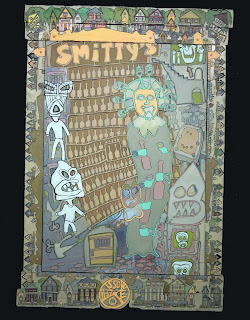