For more than a month now, I have been working with the Chicago-based artist Jefferson Pinder to help fabricate his upcoming show Jefferson Pinder -Ghost Light at the Figge Art Museum.  I honestly can't begin to tell you how cool and engaging Jefferson's work is.  The best I can do is to provide you a link to: http://www.jeffersonpinder.com/, so you can see for yourself.

Jefferson draws from his background in theater to help inform his performance pieces.  I pulled this project description directly from the Figge Art Musueum's website to help more accurately explain the idea behind a 'ghost light': Through the symbol of the “Ghost Light”, Pinder references the theatrical superstition in which the darkened stage is illuminated by a light, often a single electric bulb mounted to a stand, intended to ward off the theater’s ghosts. In the absence of a performance, the Ghost Light becomes representative of all of the lives and narratives that have inhabited that space.

The full description of the idea behind the show can be found by clicking HERE.

This is a picture of Jefferson standing near the ghost light on the stage at the Galvin Fine Arts Center at St. Ambrose University.  A huge thanks must go out to Kris Eitrheim, Matt Elliott, and Aaron Hook for their assistance with making Jefferson Pinder -Ghost Light a reality. 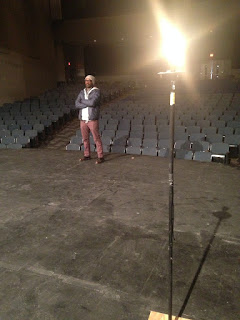 A panoramic shot of Jeremy Freedberg and Jefferson on the relatively deserted stage at Saint Ambrose. 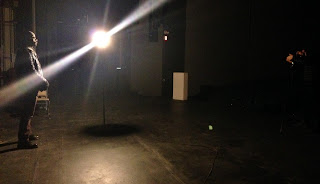 The show runs from March 4th until June 4th.  The exhibition space will have three different venues/stage sets along with a whole host of videos.  At three different times during the run of the show, there will be a 'performance' by a member of the Quad Cities community on one of the stage sets.  The performance will be documented and videos from that will be added to the overall show.  Unlike most art shows which are the same show from opening day until the day we take it down, Jefferson Pinder -Ghost Light will be a continually evolving show/space/experience.

The first 'performance' 'Token' is on March 11th and will feature the stories/insights/opinions/biography of Dean Kugler.  If you've ever read any other posts on 'Punching Holes In The Rah-Rah', you already know that Dean is a friend of mine and one helluva artist.  If you don't know about Dean, just click this link a go check out his website (go ahead and click on it, we'll wait......).

Anyway, Jefferson needed a ziggurat/step pyramid for Dean's performance, and that's where I come into the equation.......

Now although it would be cool if it were this ziggurat I carved a few years ago (since it already exists), Jefferson needs somethng bigger, better, badder, and more structurally sound, so therefore he and I are gonna build one from scratch..... 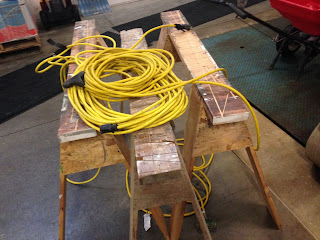 Jefferson and I 'enjoyed' a relatively warm day back in January to work outside.  Working outside allowed us to lay out the whole base of the ziggurat.  Even though I was going to have to fabricate it in sections/boxes in the theater scene shop at Saint Ambrose University, it was essential to lay it out at least once to verify everything was going to work.  Theoretical ziggurats are fine and all, but we want this one to be load bearing and to line up properly (the necessity of this will be evidenced in future images).

Even though it was 'warm' in January by Iowa standards, it was still cold and blowing.  Here is Jefferson laying out the Southwest on plywood. 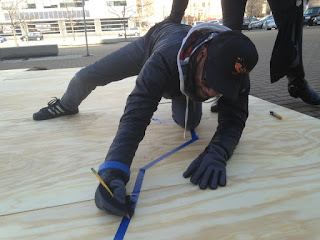 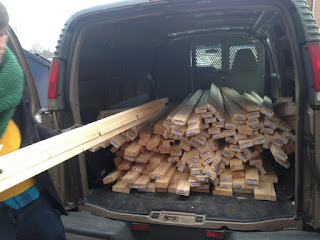 .....which make a pile that looks like this.  We wanted the studs to be darker, so they resembled older construction since the final incarnation will require a whole bunch of lath. 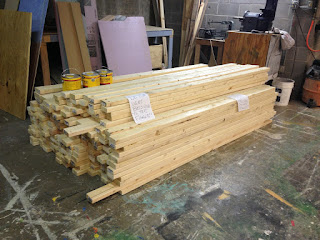 Time to stain over 200 boards.  I borrowed (and subsequently trashed) Terry Rathje's stain spreader from our Vestibule project back in 2013 (here is a link to the preparations for Vestibule, and the installation). 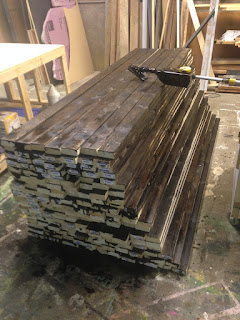 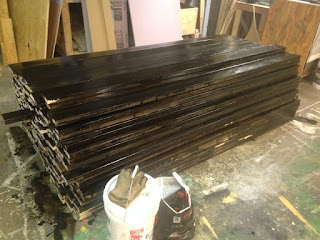 The whole ziggurat breaks down into roughly 17 boxes.  Here is the backside of the box which is the west end of the gulf coast. 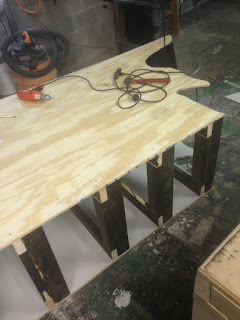 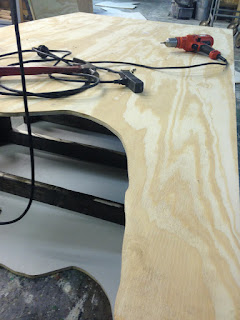 Each box has its 'insides' painted before assembly. 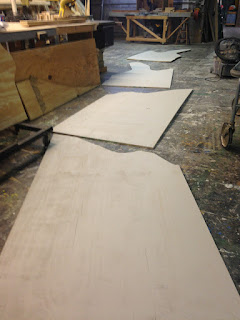 I do my own stunts.  Here I am standing on the top of the box which is the western gulf coast.  Since Jefferson was in Chicago at the time, I took this picture to show him that some kind of progress was being made and that the sections were load-bearing. 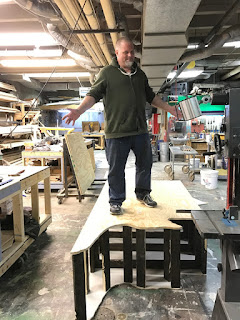 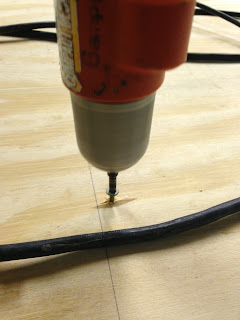 Eastern gulf coast/Florida as a box..... 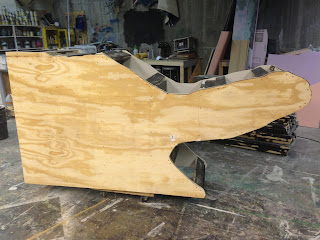 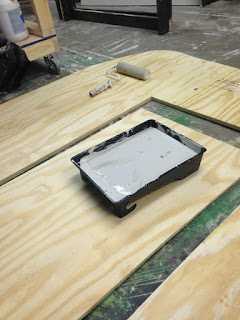 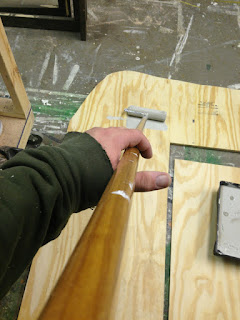 As the number of completed boxes grows, the pile of stained studs diminishes. 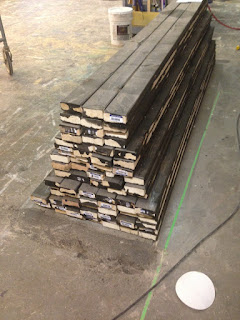 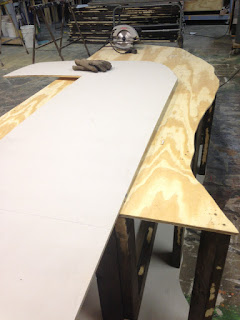 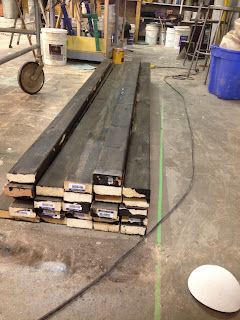 In the background of this picture you can see part of a painting for the props for the upcoming show at Saint Ambrose. 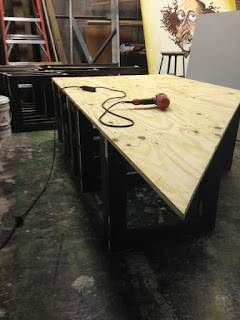 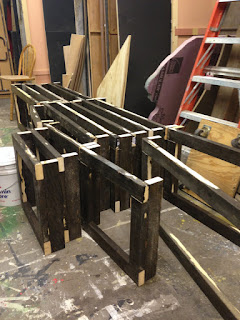 The boxes are completed.  Now it's time to transport them to the Figge Art Museum. 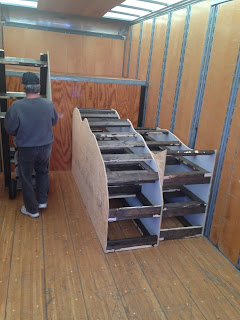 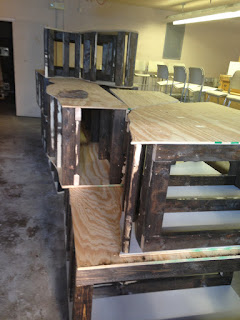 I ended the day with all of the 'boxes' jammed into the 3rd-floor gallery space. 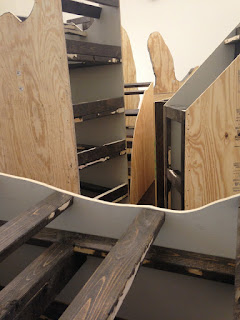 Before I end this post, I wanted to provide a sneak peek at one of the other 'performers'.  One of the other 'sets' will be a barber shop.  Not too long ago, Jefferson sprang for free hair cuts at Joe's Barber Shop on Harrison Street.  For two days, Joe McLemore gave free haircuts while Jefferson and Jeremy documented the process.  Here is a picture of Joe McLemore and I after I snagged my free haircut.  I think I look 43% more handsome than normal!  (more on Joe in an upcoming post!) 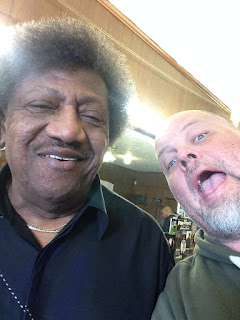 There is a lot to accomplish between now and the show opening on March 4th.  Next time I'll build the ziggurat and show off the start of the barber shop and more!  Be sure to check out Jefferson Pinder -Ghost Light.