Roadside Motel is one of just a couple pieces in the Roadside Attraction series in which I incorporated a blue-ish glaze (Blue Hare's Fur).  This was one of a small handful of pieces that I started to glaze back in March (before the pandemic hit) and didn't get a chance to return to until late October.  When I left at the end of that day in March, I honestly thought I'd be back the next day to finish working on it, so I took no notes on what I was doing/thinking with the glazes.  To be honest, by the time it came out of the glaze kiln in October, I had no recollection of even putting blue on the piece.  Obviously I did, and I really enjoy the results, so it's likely I will try to do it again.

When I first got these pieces back to the studio, I set them out on the edge of my work table and took some quick snapshots of each of them.  Between the overhead fluorescent lighting and the heavily paint-splattered background wall, it's hard to form a good sense of what these pieces actually look like. 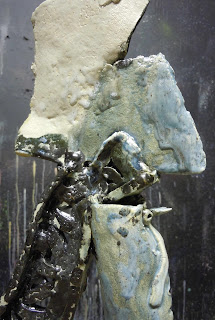 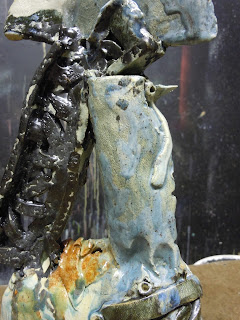 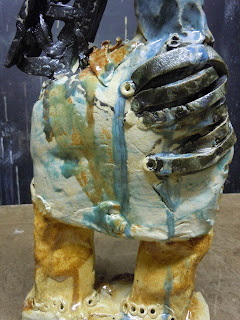 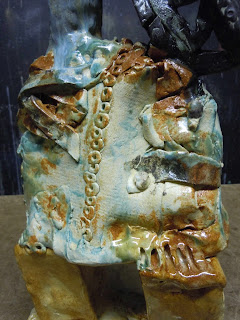 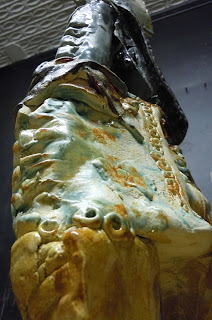 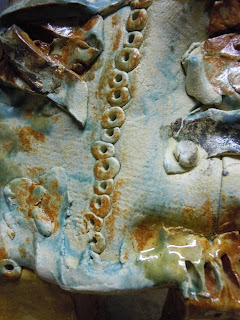 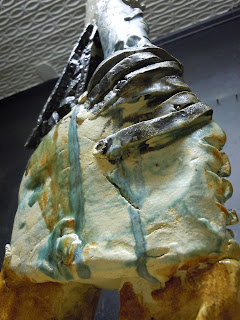 A close-up of the glaze drips. 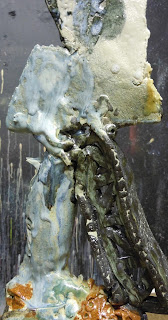 In the box that I built for Roadside Motel, I utilized parts of a couple older carvings: Conquistador Nuevo and Sleight of Hand.  Although I like the effect, I find the carving too dominant, and so I'm going to need to repaint the inside of the box in order to subdue the black lines of the carvings.  That 'redo' will show up at some point in a future post. 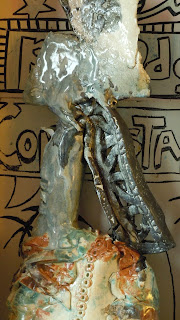 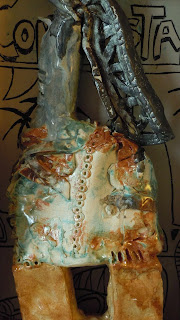 Next time we'll take a look at Uneven Shoulder.