Studio Tidbit. Everybody Loves A Parade (Directly Outside Their Studio)

This little diddy could almost be tacked on to an earlier post regarding all of the cool things that happen around my studio (http://stevebankspunchingholesintherah-rah.blogspot.com/2012/05/tale-of-two-studios-part-ii.html).  For several years now, Quad City Arts (http://www.quadcityarts.com/) has been putting on Festival of Trees and the whole shebang starts off with the Festival of Trees Parade.

I have heard rumors that the FOT parade actually has more balloons than some of those other big name parades that happen around this time of year.  I don't know if it's true or not, but it makes for a good story and that might be all yer gonna get.

Anyway, the night before the parade, I sneaked down the street to snap a couple of images of some of the balloons as they were being 'staged' on 3rd street. 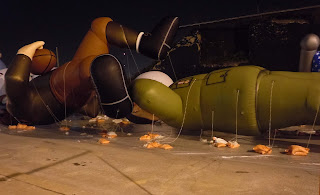 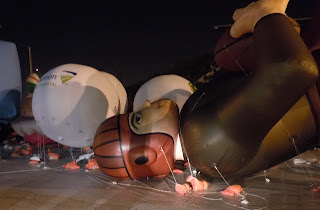 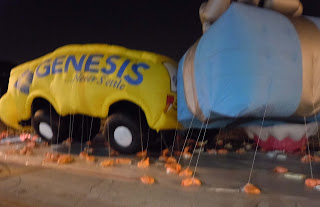 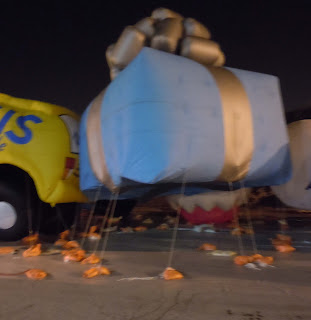 Fast forward the hands on the clock about 12 hours, look out the front window of my studio, and POW! you have a parade.  Honestly, how many artists do you know that have three different parades that march past their studio windows?  (OK, in all fairness, the St. Patrick's Day Parade may be more of a stagger past my studio windows, but let's not rush to judgement.......).

So for a blog that has featured The Parmageddon sandwich, The Boozie Burger, Giovanni's Creamy Garlic Pizza, and The Ultimate Carnivore Burger*, is it any surprise that there exists a parade that marches large inflatable foodstuffs past my window?  I thought not. 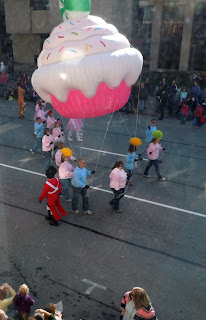 *Please note the lack of Shevek & Company Restaurant when mentioning foods featured on PHITR-R is simply out of respect for the cuisine.  You don't make large inflatable versions of chef Shevek's food, fill it with helium, and then have mere mortals wander around town with it on a leash.  -it's just simply not done that way. 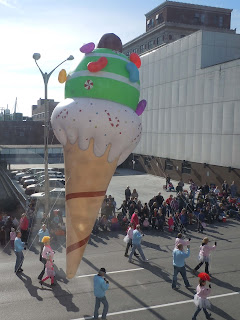 Although these figures below weren't some sort of mega balloon/float sumthin' sumthin', I thought they were cool enough to mention in the blog.  Don't remember if I saw who made 'em, but I wouldn't mind seeing more of them next year.  Keep up the good work you unsung-balloon-person-maker! 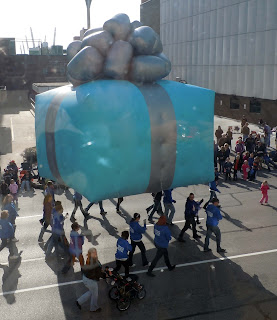 Now for the really big people. 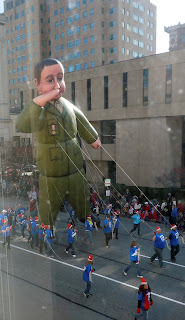 By the way, that is a three story building immediately behind the three-story-building tall balloon and those are actual-sized humans pulling the float.  (The traditional use of Oompa-Loompas was outlawed in a recent city council meeting, and the hardworking Oompa-Loompas that were lined-up to work in the parade were, in fact, deported to Loompland and unceremoniously devoured by a ravenous array of Hornsagglers, Whandoodles, Snozzwangers and a rabid Vermicious Knid).

Really, when was the last time people conspired to march a dragon past your place? 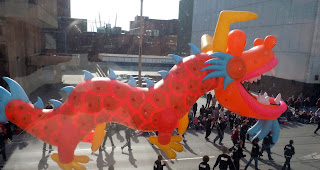 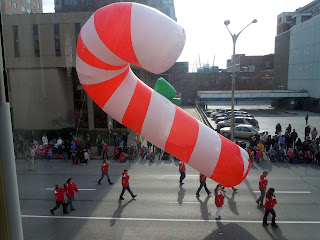 When it is time to finish, ya gotta finish big!  (and since Arthur Carlson has pretty much immortalized the Thanksgiving Turkey Give-Away, we'll just focus on Santa Claus instead) 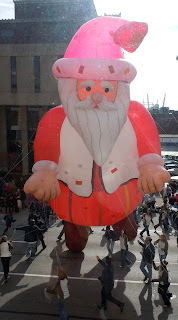 Below you can see Santa in his customized Santa-Mobile.  Rumor has it that the Santa-Mobile is also equipped with smoke screen, oil slicks, behind-the-headlight-mounted rocket launchers, and a key chain that is actually a shark with a LASER. 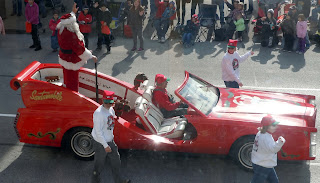 Above, beyond, and outside of the parade, Santa Claus frequently tools around downtown in front of my studio blaring Christmas music from his radio.  This of course brings up the question of if Santa Claus is naughty, whose list does he get on?

Next time we dive right back into some carving AND in an upcoming post we have a fairly well-known guest come visit the pizza joint directly beneath my studio.