One of the pieces I had in Merican-Tastic! back in 2012 was Delivery Especial.  I had some lingering suspicions that it would find its way back into the land of reworks.  I wasn't 100% satisfied with how it turned out, but I put it in the show to get a feel for how it looked and give it some space to breathe.

Here is an image of Delivery Especial from Merican-Tastic! with Dr. William Campbell pointing to some good bits. 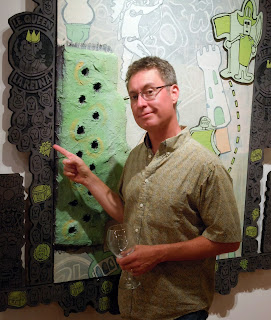 Although I intentionally painted both the canvas and the frame to be on the minimal side of visual activity.  They both ended up serving as a glaring reminder that what I want to do with a piece, and what a piece needs to have done to it, can often be two entirely different paths.

Now it's time to try to bring Delivery Especial to a more satisfying conclusion.

I decided to add several more 'flag-planting explorer dudes' to the mix in order to make the top layer of imagery not so reliant on the underlayers.

Here they are in place,  -primed and ready to be painted with a base coat of orange. 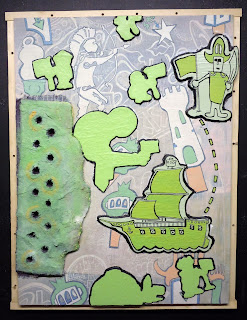 Freshly 'oranged' and ready to proceed with the line work. 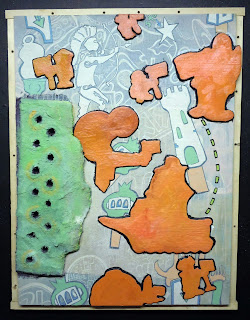 Now it's time to start adding the line work. 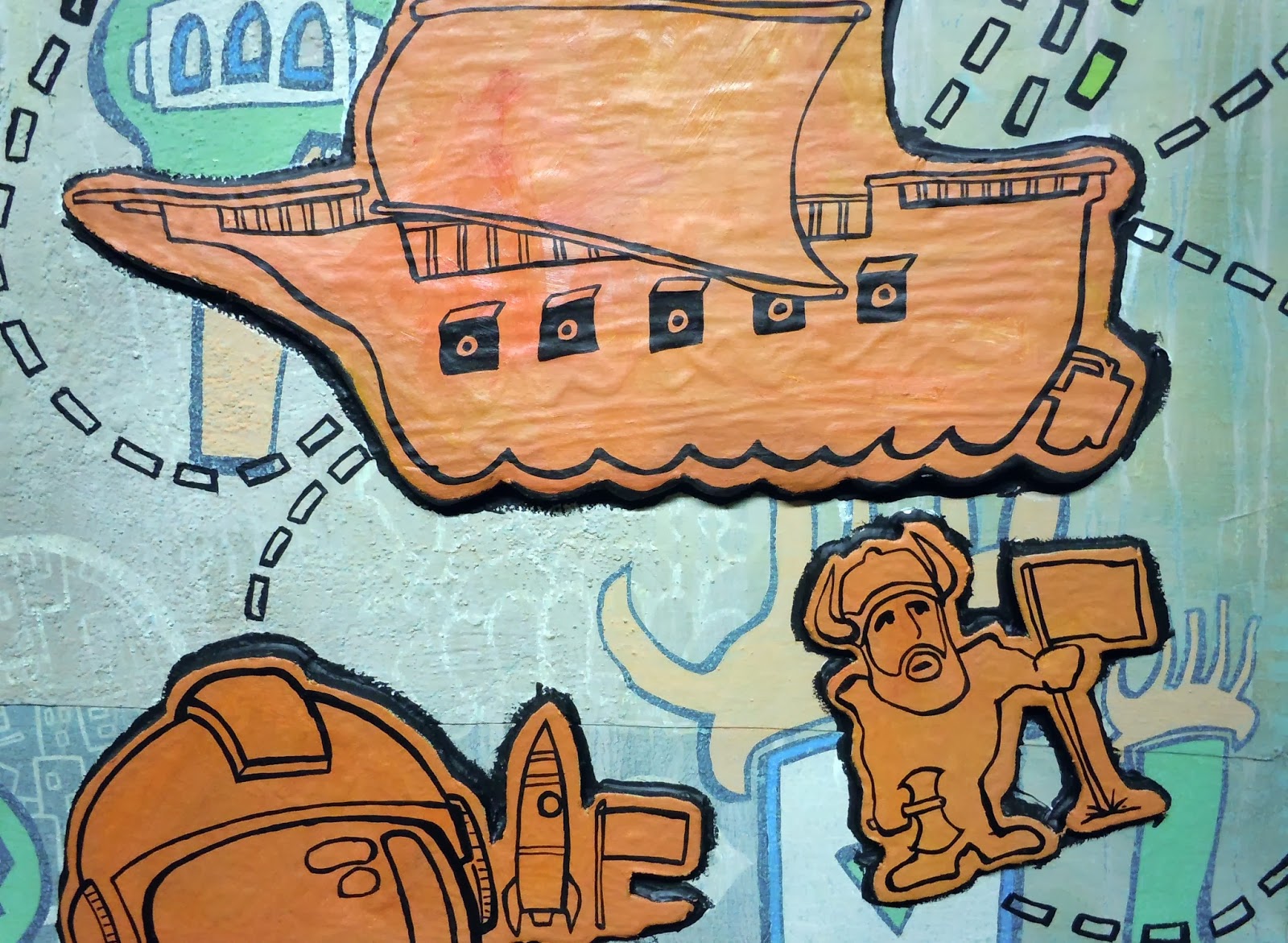 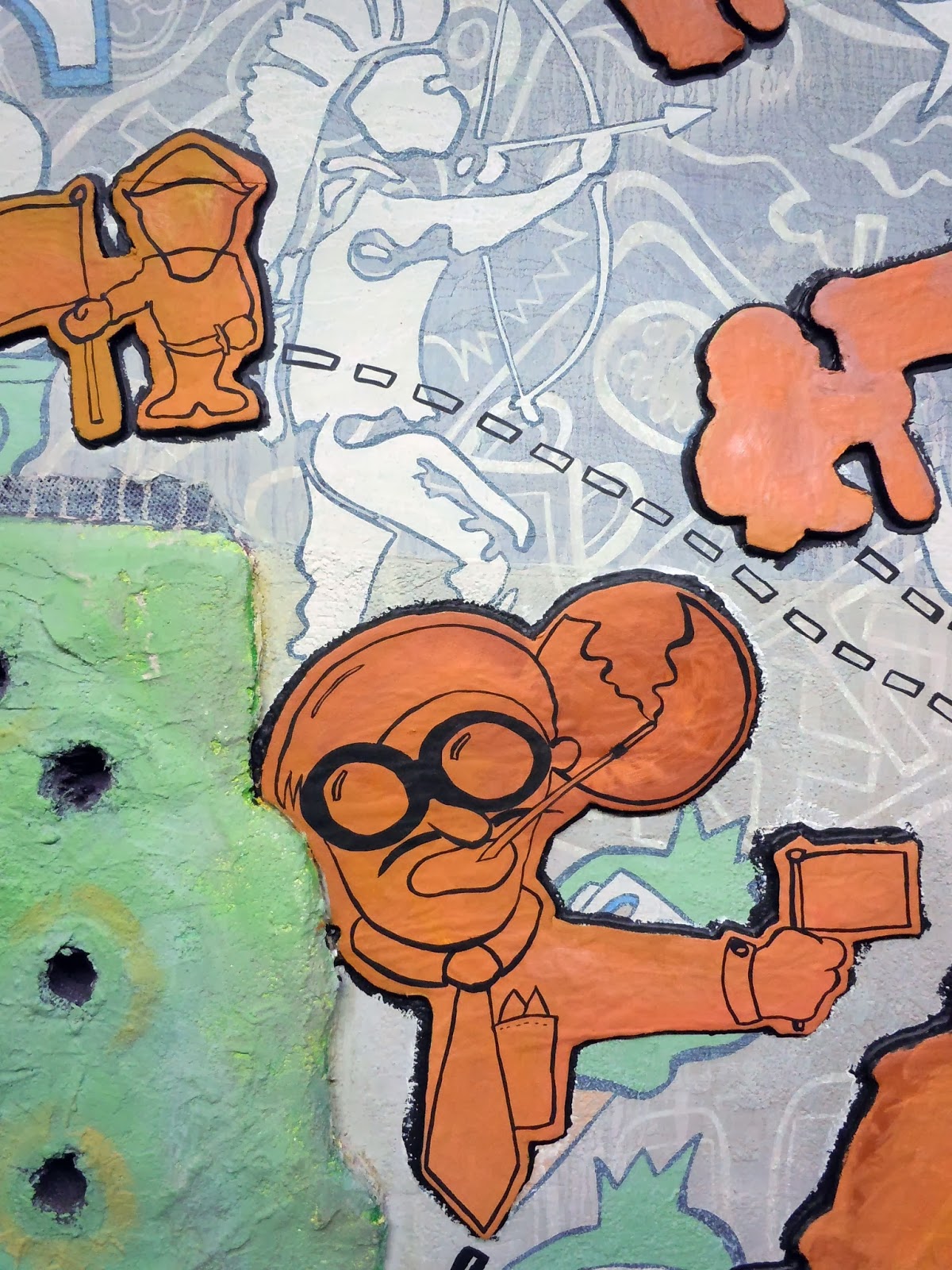 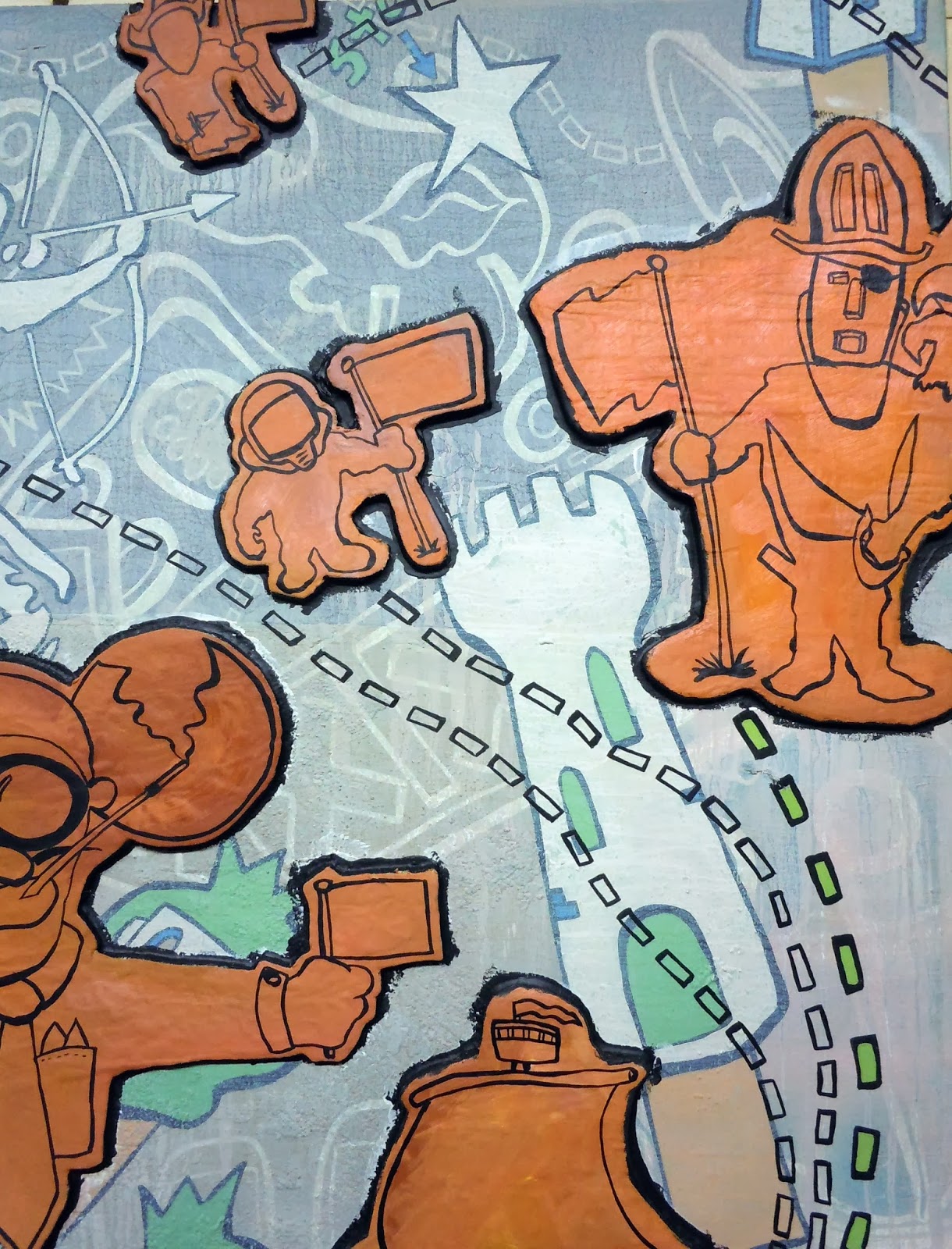 A few days later, it is time to add some color to the mix.  Here are the two 'palettes' of colors for the piece.  Once these are mixed together, the whole piece has more than a passing resemblance to a paint-by-numbers/coloring book experience.  As is widely known, the number one rule for coloring books is 'to stay inside the lines'. 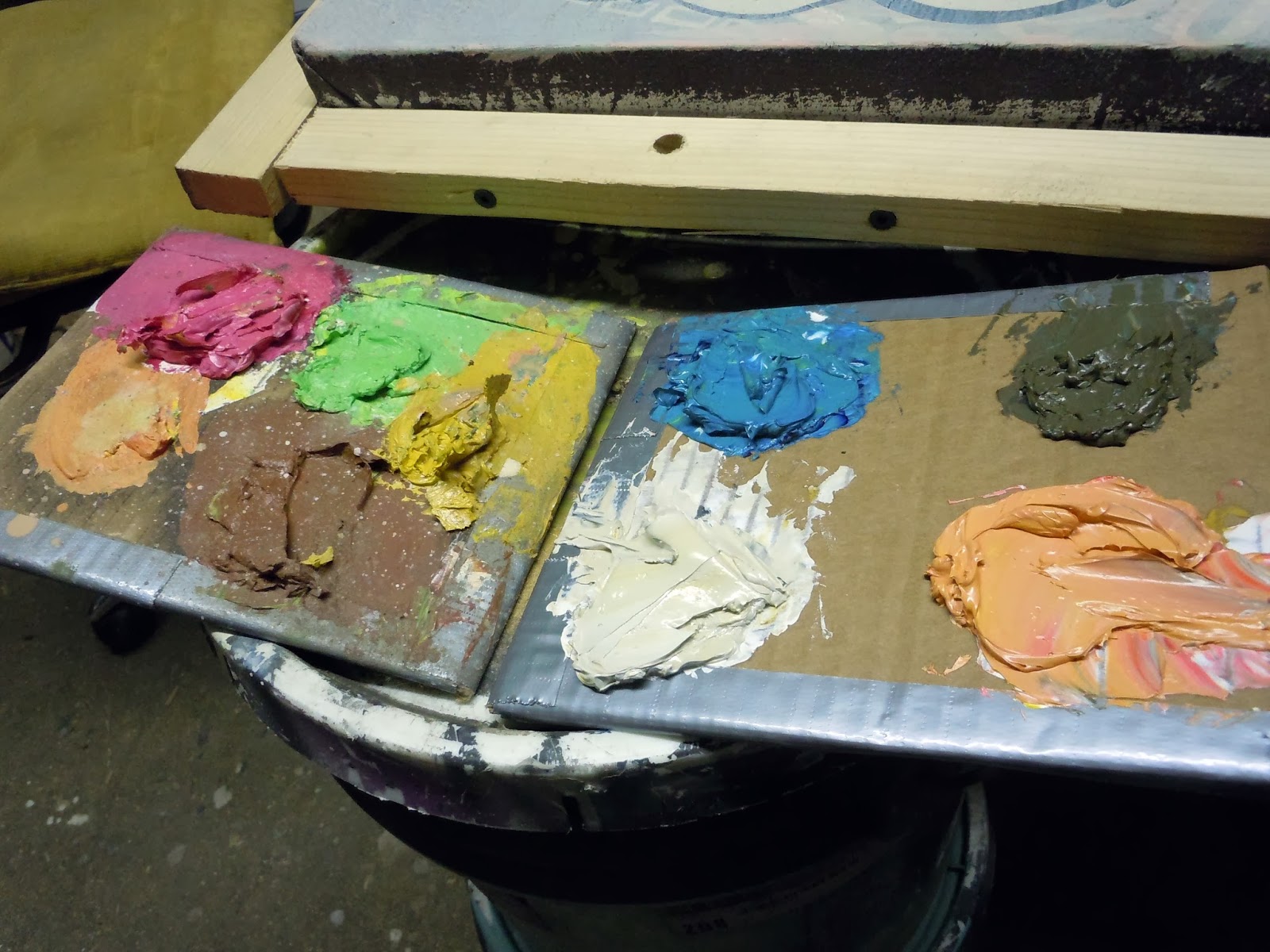 A former teacher/mentor/friend of mine at Florida State University, Ed Love once said in class that coloring books were insidious training tools because they teach you that "...there is a place for you and you should stay in your place". 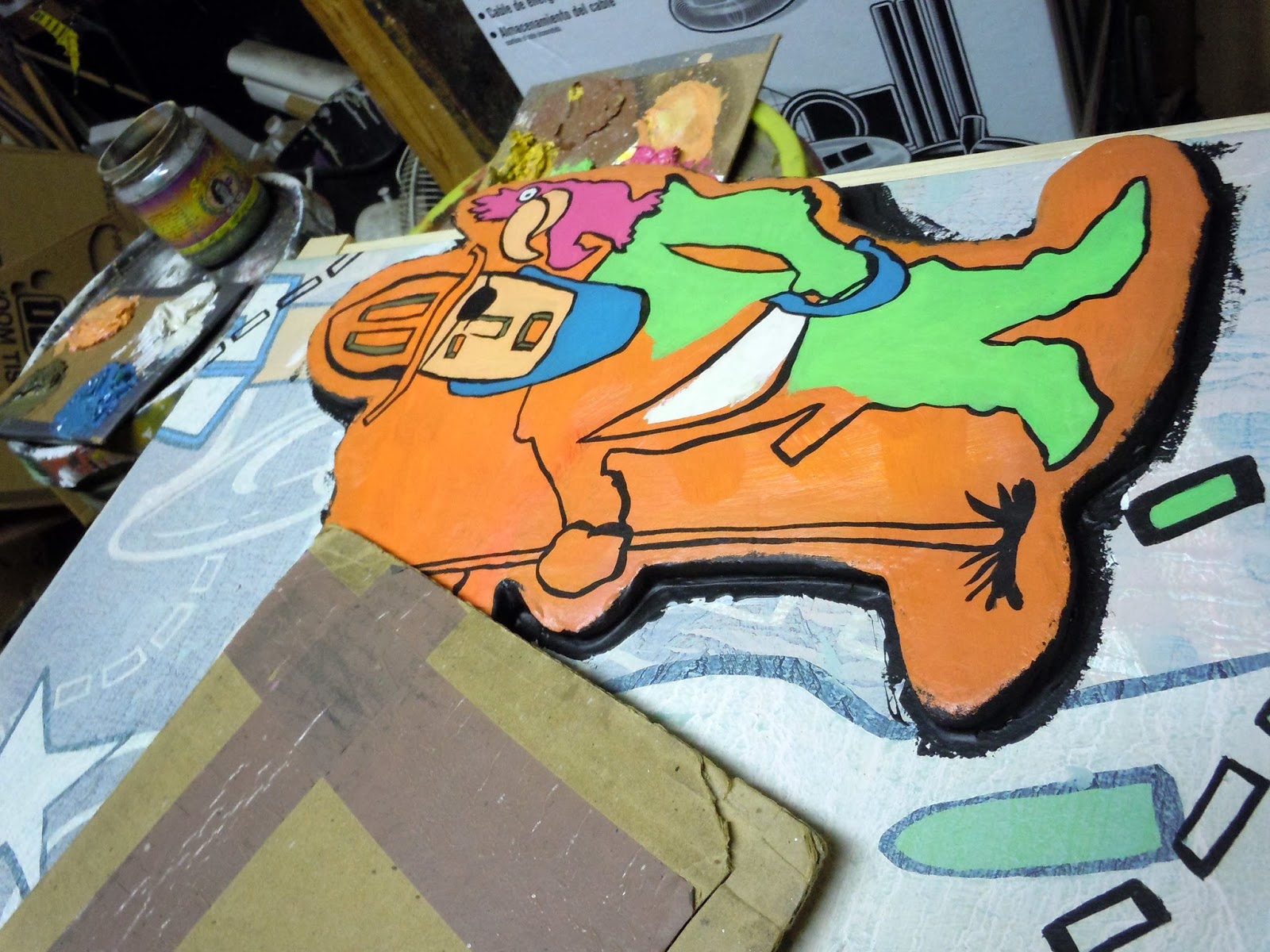 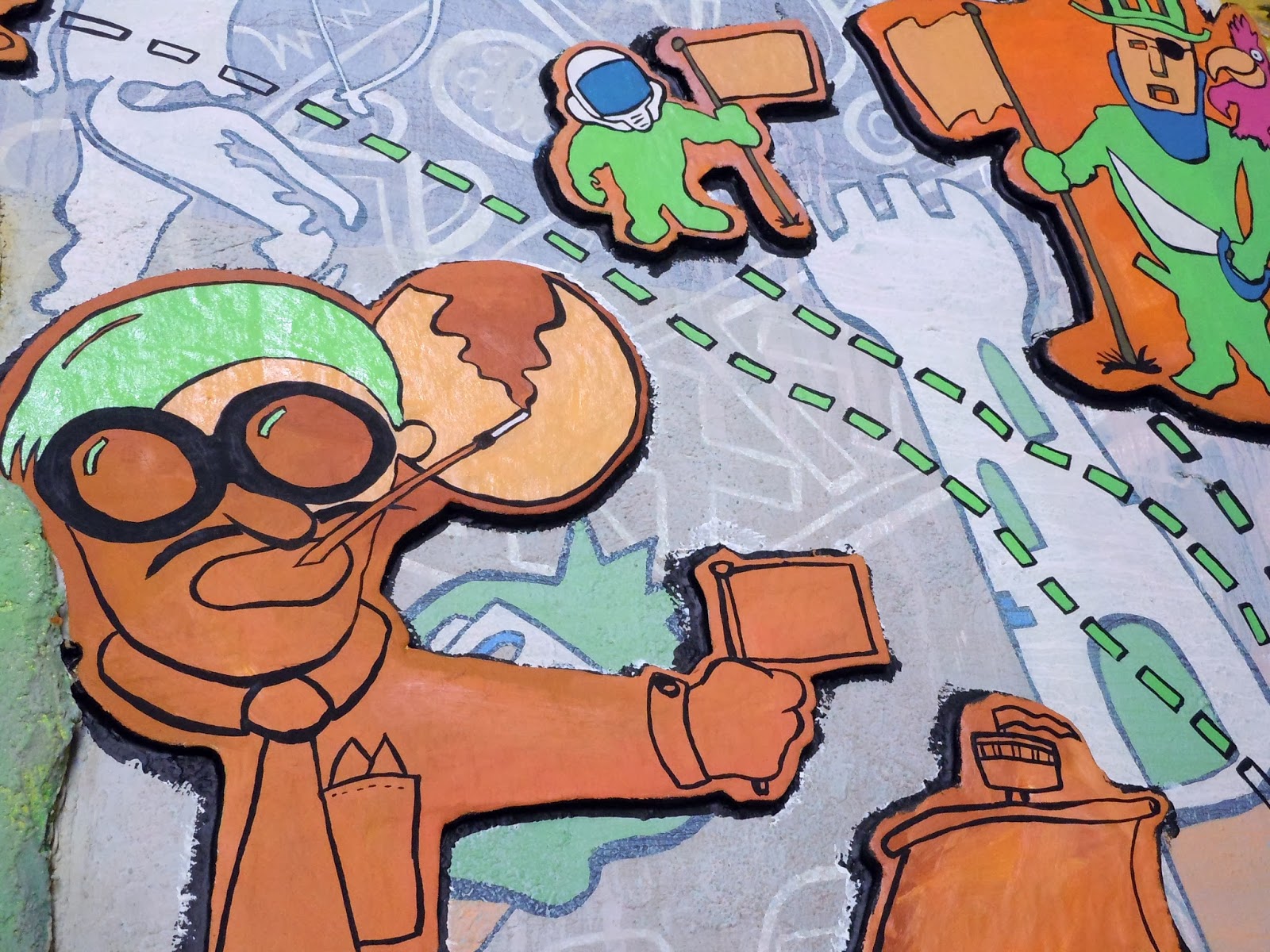 Ed Love died in the late 90s from a heart attack.  I am (pleasantly) surprised at how often memories of things he said are still with me while I'm working in the studio. 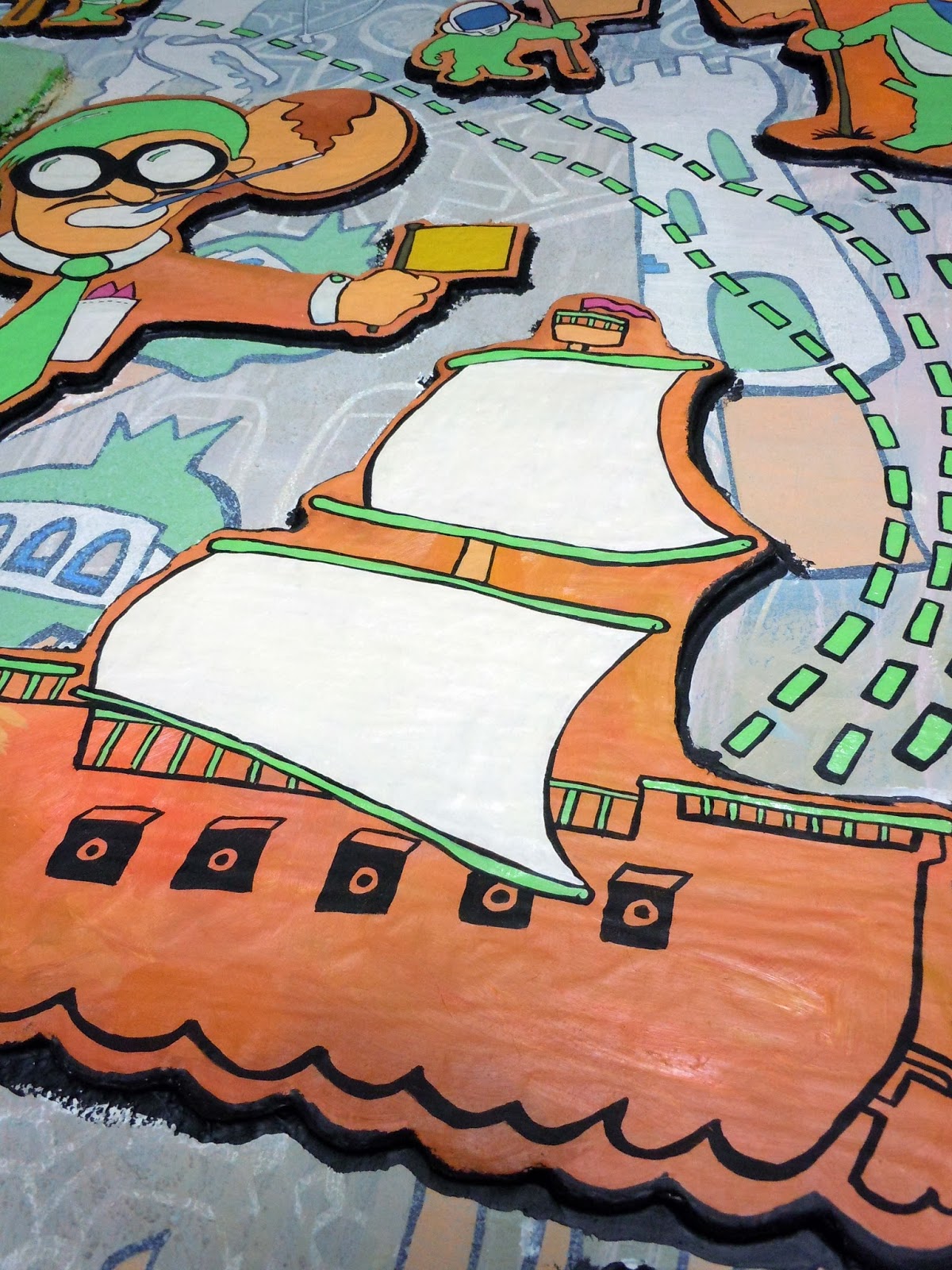 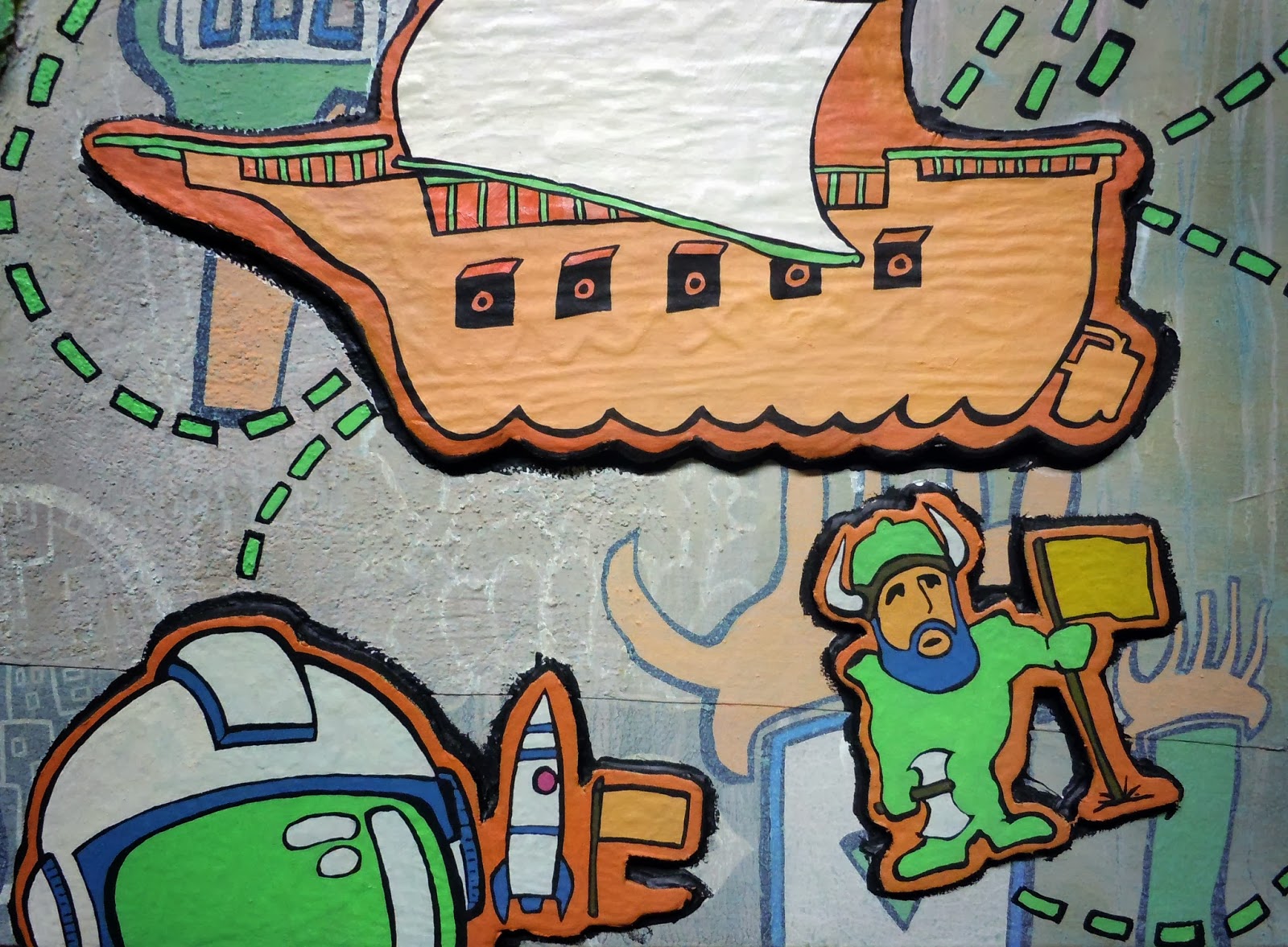 Here's Delivery Especial without the frame. 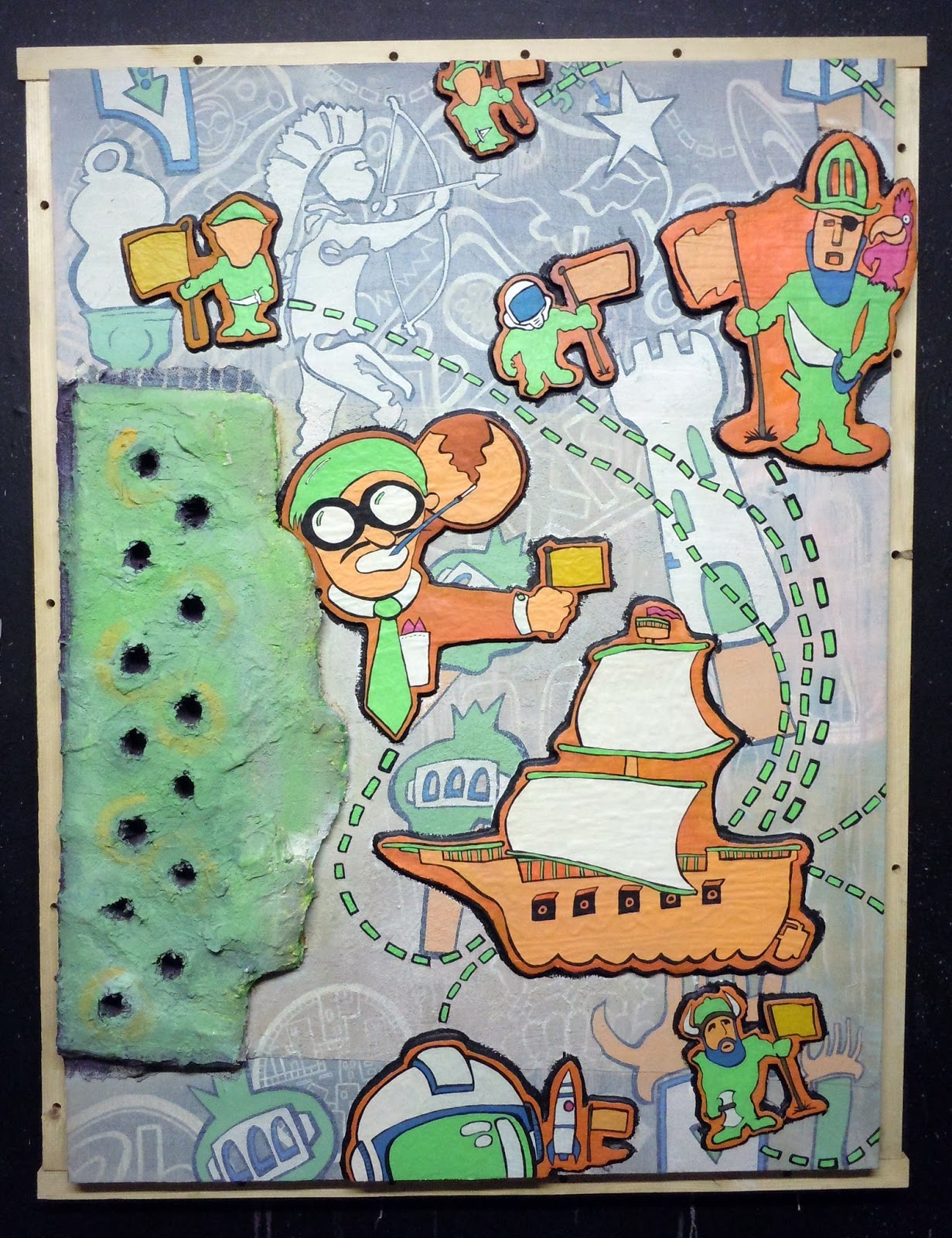 The frame also needs to be modified to coalesce with the new reality of the canvas.  By adding this much color activity I am striving to make the whole piece more energetic.  The inherent risk is overshooting the mark and making the piece a hyperactive mess -a technicolor sneeze with anemic compositional sensibilities. 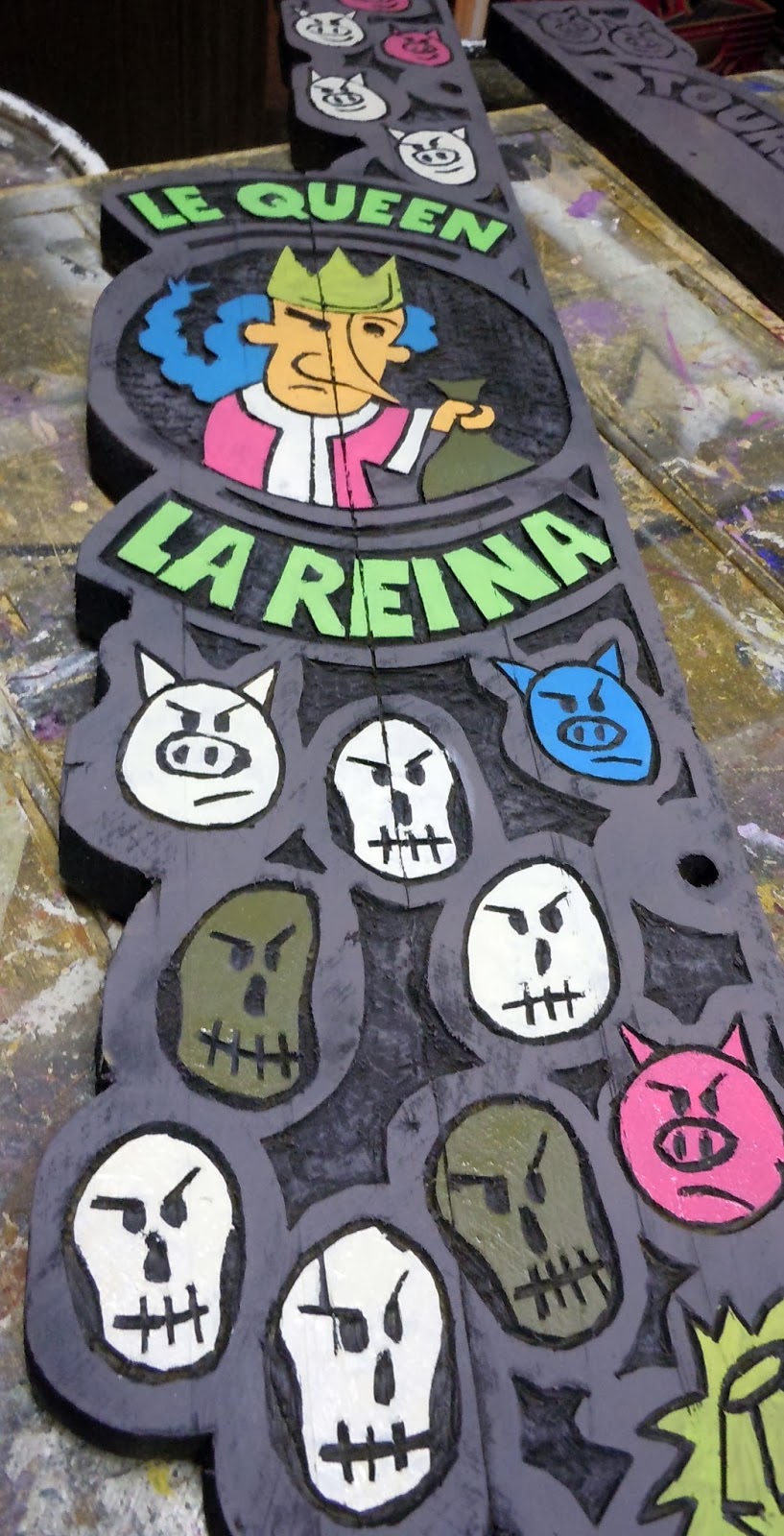 But once I committed to the color, there was no way to go but forward....

*Side Note:  The bowl of mice is a reference to a 'method' of torture used during The Spanish Inquisition (if not in other places where inhumanity and madness ran rampant).  The torturers would place an inverted bowl full of mice on the stomach of a victim.  Hot coals would be place on the underside of the bowl.  In order to escape the heat, the mice would burrow into the victim's abdomen. 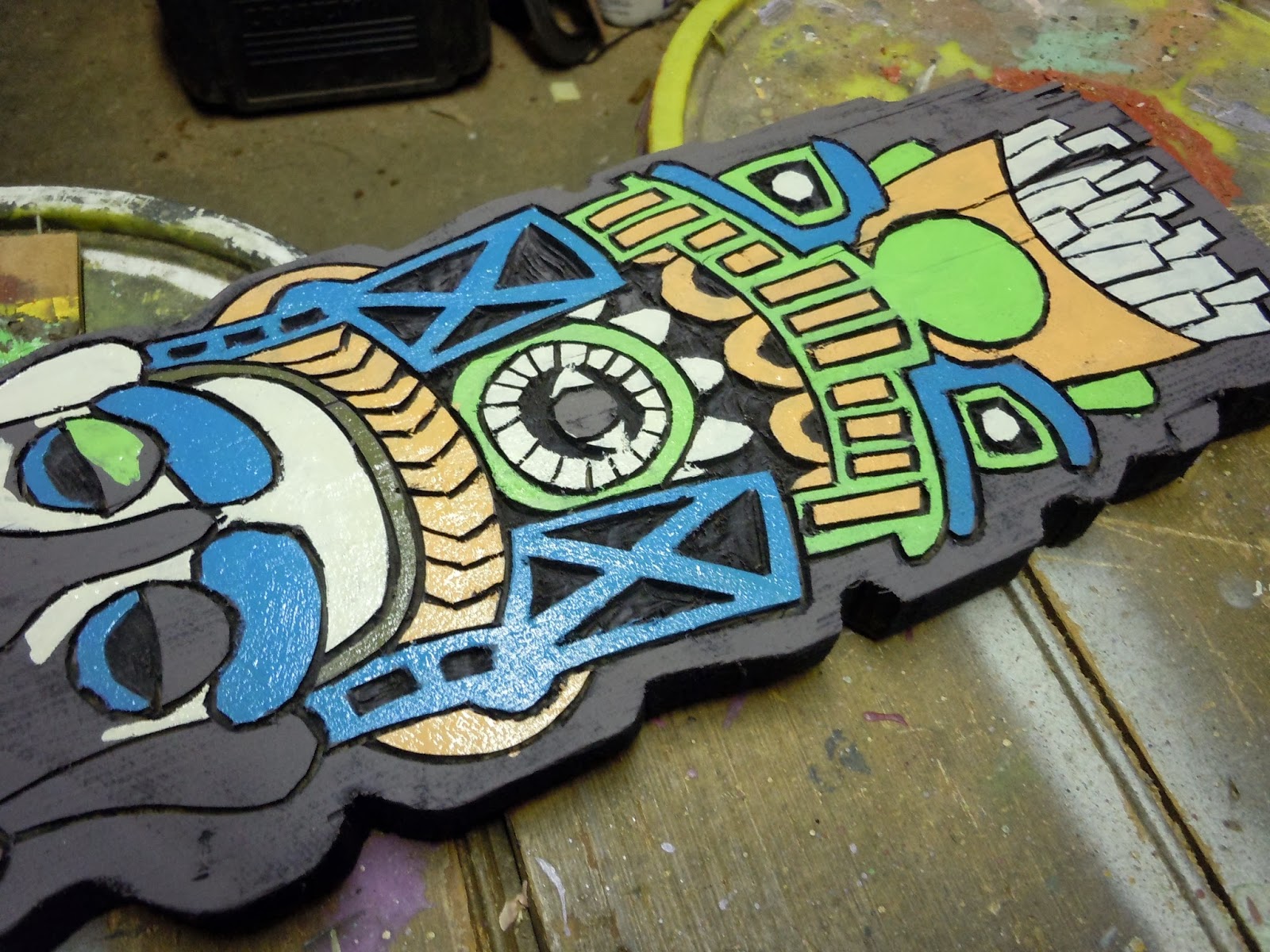