Resurrecting Another Blast From The Past

Out from the vault.

When I had initially started fabricating my Statue Of Liberty figure back in 2016, I was thinking about using it in a show I had coming up in 2017.  However, the opportunity that was presented by showing it at North On 71 (which was a guerrilla show we put together down in Kansas City back in 2016 to coincide with the NCECA Conference (you can read a little bit about that show by clicking this LINK)), was too good to pass up.  I hurriedly (horridly?) 'finished' the piece in time for the show.  It has sat in storage for nearly two years since, unloved, and unfinished to a level of my satisfaction.  Time to revisit the matter.

I had several dissatisfactions with the piece.  The splotchy color was the most glaring offense.  I'm gonna take it back to ground level by unifying the color and then rebuild it from there.  Purple seems to be as good of a base color as any. 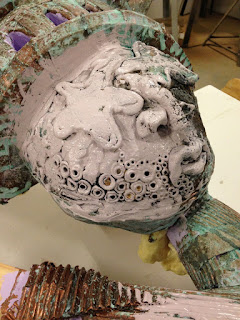 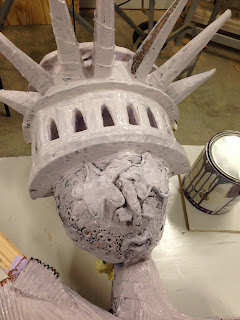 I may even return it to its verdigris finish in the long run, but it will be far more even in appearance.

In addition to reusing portions of the collaborative sculpture allinitogether (a piece that Terry Rathje, Dean Kugler, and I built back in 2015) for portions of my horse and rider sculpture (which can be seen/revisited by checking out THIS recent post), I am also reusing parts of it to fabricate the 'base' of statue of liberty as well.

However, I feel this piece needs to have more than just reused sections to form the body.  I want to add some newer carved wood elements to make the base a little more interesting. 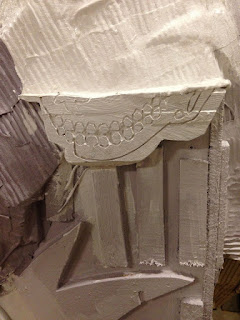 This was a 'leftover' face I was considering for the rocket ship in Countdown that has finally found its purpose in this piece. 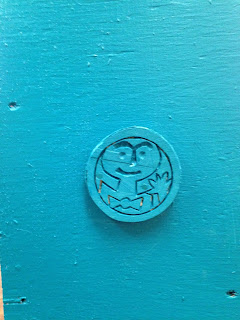 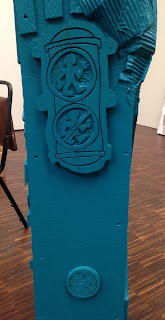 I make the base out of sheets of plywood that I glue and screw together.  When you mean business, you use both a chemical AND a physical method of fastening.  Once the layers are all attached, I spread Bondo over the surface to make it nice and smooth (or smooth-ish as the case may be...). 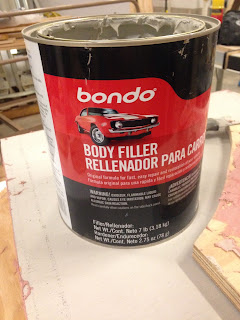 Here you can see one half with the pink Bondo color and the other half the exposed edges of plywood. 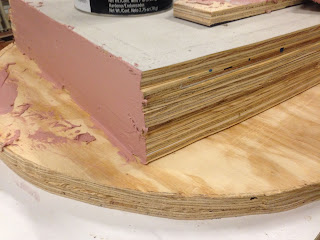 I brought in one of my studio helpers to paint every nook and cranny on the piece.  She did an even better job than I expected.  The statue looks wonderful/obnoxious.  Here she is just finishing the SOL.  Immediately in front of her at her feet, you can my Mr. Peanut sculpture waiting to be painted. 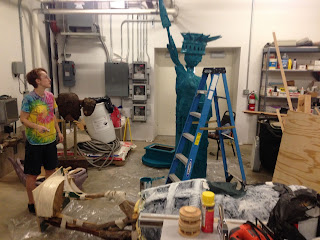 Another element that is finding a place in this sculpture is the 'Minor' fortress from my previous POST -Building A Fortress: Major, Minor, and Medium. 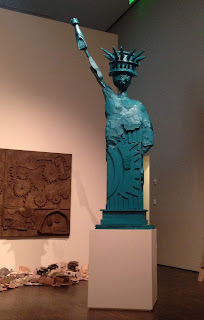 You can see it more closely in this image because I climbed up a big ole heavy ladder and took a picture specifically of it. 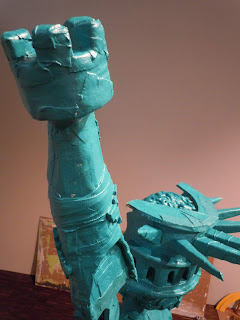 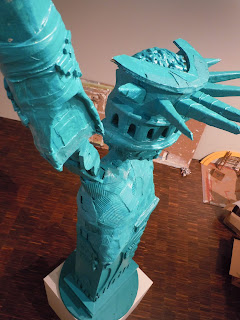 The same idea from an upwards angle. 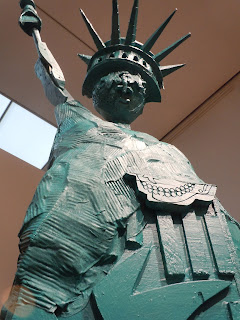 Pop Culture Palimpsest is open.  The show runs until September 2nd at The Figge Art Museum.