Captain Galactikka In The Third Dimension!!!

I have been making several mixed media sculptures of pop culture/marketing mascots over the years.  I have always had the intention of also making sculptures of some of my own characters to merge them into one unified universe (a 3-dimensional version/interpretation of my 2-dimensional works).  'Wanting' has finally become 'doing'.

Ladies and gentlemen, boys and girls, house pets and free-range beasts, may I present to you, Captain Galactikka in the 3rd-Dimension!!!

Your silence tells me that you might need a refresher on who is Captain Galactikka?  Remember this dude/piece? 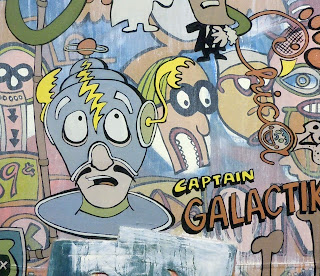 If that's not enough, here is a LINK to a previous post regarding the Captain and making a carved frame for his piece.

Anyway, here is the beginning of the process for making my very own Captain Galactikka.

I start off by swiping a base from an earlier aborted sculpture.  I then build a new top for it -the torso and arms of the Captain. 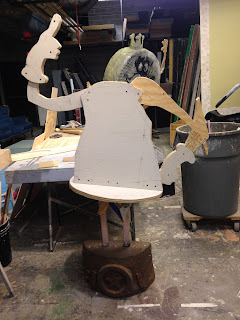 To give the piece volume, I lay out the general shape with several layers of chicken wire (poultry netting), and then spray on several cans of expanding spray foam/insulation.  The foam flows all around the chicken wire and creates a very tough and durable mass. 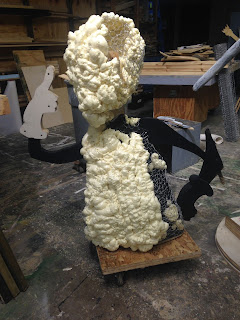 Then, in order to give the body a more proper (less lumpy) shape, I take a serrated steak knife and trim the excess foam of the piece.  Once that has been completed I run longitudinal and latitudinal strips of duct tape over the body to form my anchor points for hot gluing strips of canvas down to the body. 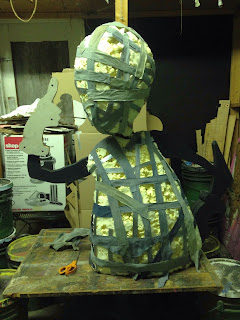 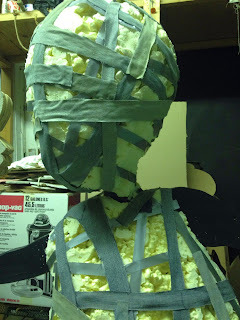 Captain Galactikka in the foreground and Lil Seezer in the background.  Seezer has already had fabric wrapped and primed of his anchor points. 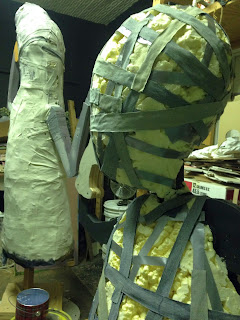 This is Captain Galactikka after several overlapping layers of fabric and paint have been applied. 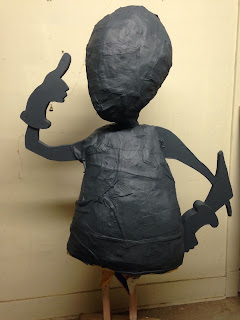 My next steps for the Captain is to fabricate details such as a belt, a belt buckle, eyes, lightning bolts, and a planet (to name a few...).

Next time we'll (probably) travel back to the safety of TWO dimensions...
Posted by Steve Banks at 10:42 AM