Reality Check!  I started to do the math tonight on how many carved frames I am hoping to create for Merican-Tastic! and an optimist might say my future looks 'Carv-alicious', while a pessimist might say 'Sayonara, sucker'.  There are roughly 12 pieces that I hope to create carved frames for.  This gives me roughly 11 weeks until our 'teaser show' (more on that later) opens, and 15 weeks until Merican-Tastic! proper opens.  All said and done, that's roughly a completed frame every 9 days.  My trusty Dremel Tool, my back, and my inadequate patience are all going to be pushed to their limits.

There are no hard and fast rules on what pieces get a carved frame and which ones don't, but a general rule of thumb is that I have to feel fairly strongly about the image on a particular canvas.  Canvases can change.  It's hard to un-carve wood.

I usually have the canvas portion of the show 50%-80% completed before I entertain frame ideas.  I brain-storm with images and words, and then crank out a series of drawings like the ones below for an upcoming piece which will be called Delivery Especial.... 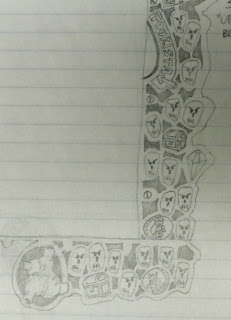 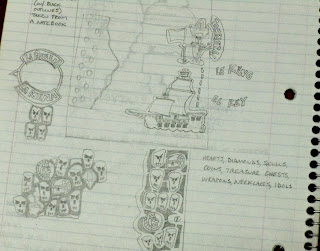 The sketches are just a starting point.  Next I figure out roughly what I am going to need for wood/boards to pull off a particular composition.  After I have picked out boards that will 'work', I drill a series of holes in one of the boards and squeeze in some wood glue and insert dowel rods into the holes. 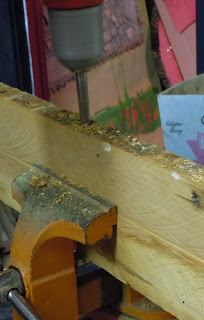 I round off the tops with sandpaper, and then drill corresponding holes in the next board I am going to attach. 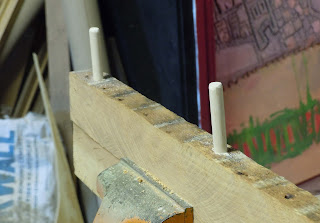 With any luck the holes line up closely enough that I can just push the two (or more) boards together.  More often than not, I either have to apply the gentle caress of Mr. Hammer, or Mr. 'C'-Clamp to persuade the boards to come together.  I am confident that the stellar Italian restaurant directly below my studio finds the sounds of Mr. Hammer equally as therapeutic as I do. 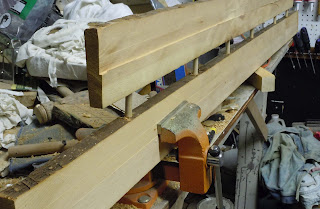 Then I layout the composition on the raw boards in pencil (taking into account the natural knots, pits, nail marks, and imperfections for the composition).  I make any needed adjustments prior to using a felt tipped marker to 'ink' the board. 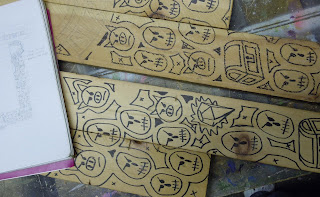 Then I start carving... 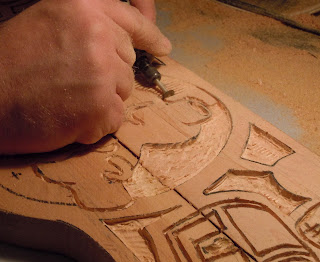 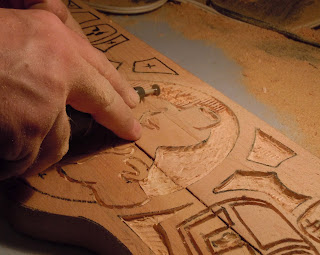 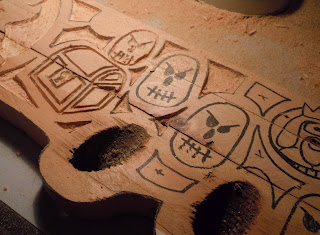 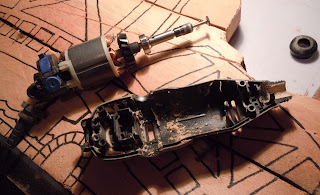 I still make design modifications while I am carving (mostly intentional) if I see new/interesting possibilities.  I also have to periodically open up the Dremel Tool and blow-out/brush-off all the sawdust that magically finds its way inside.  I actually burned up my first Dremel because I was not as fastidious as I should have been when it came to cleaning that bad-boy out.  It now resides in an EX-CH-AN-GE piece that Terry Rathje completed back in 2008 called The Cabinet of Doctor Dremel  (http://www.theartfeed.com/profile/show/35).

Here is the start of the frame for another Merican-Tastic! piece tentatively called High Noon on the Streets of Reason.  You can see some areas by the cactus on the right that are not carved out.  When I first laid out the 'Wild West Town' I completely forgot to put in the areas where I drill holes through the frame so I can bolt the frame to the piece itself.  The cacti shapes will be those drill areas. 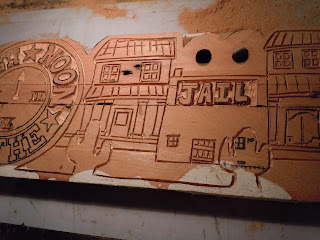 Carving out letters takes more patience and precision.  On any given design, It's difficult to determine if a cactus or a window isn't quite the shape I intended.  However, if the carving bit gets pinched and then zips across the board and turns an 'E' into an 'F', my attempt a carving the perfect 'Earthling' could turn into a 'Farthling', and who in the hell wants that?  (with the exception of maybe Doug?.... Matt?..... Gary? .....John? ......my sister? .....former students? ......random internet strangers?).

So here is the original base image for Delivery Especial.  It was a piece from 2001 called Wall Motif: Without. 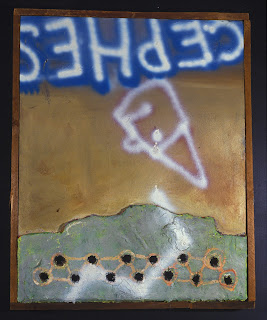 This is Delivery Especial waiting to have line work added. 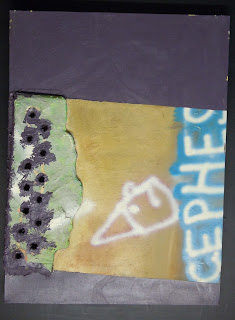 Finally, here is an old carving called Processionalization.  I carved it in a board taken from the back of a built-in closet that I snagged while completing a demolition project (you can see the 'hangers' are still attached to the board).