Hey Rocky! Watch me pull a rabbit out of my hat...

Forming of the body for Twinkie is basically done, all that is left is the surface treatment and the constructing his hat.  If my studio was some sort of warehouse space with a large overhead door, I would have made Twinkie a 9' tall monolith.  Since my space has numerous old, narrow doorways, the hat had to be made separately -or I would have fallen victim to the classic 'artist blunder' of building something that you can't get out of the studio.  Hey, It happens.....

Making art is quite time-consuming.  Minor changes, reworkings, and/or tweakings may equate to an entire day (or even weekend) obliterated just to make one small modification.  I'm not sure that the ubiquitous montage sequence in movies and television do anything other than foster the expectation that progress comes smoothly and quickly.  I frequently underestimate how long it will take to do something in the studio.  I thought it would take me a solid 8-10 hour day to make a hat for Twinkie the Kid -including the first layer of fabric and priming. 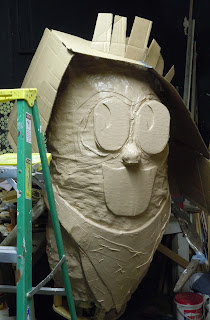 I started with fitting/shaping a flattened-out cardboard box.  I would position it and then hold it into place with Duct tape and hot glue. 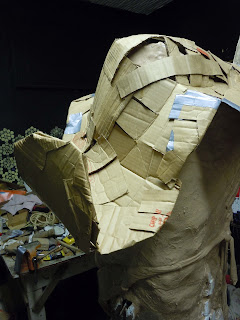 I should have known I was in trouble when it took me roughly three hours just to get the brim/base into a satisfactory (and stable) shape. 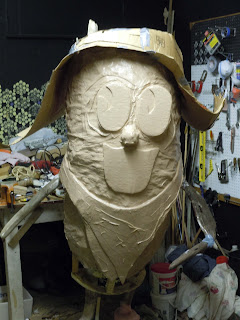 Here is a front view of the base/brim of the hat.  In case you are curious, it takes a while to achieve the proper 'upwards curl' on the outside edges of the brim.  If you weren't curious, don't read that last sentence. 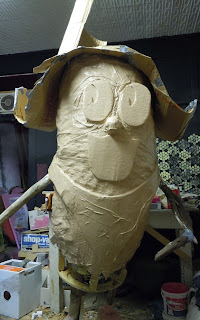 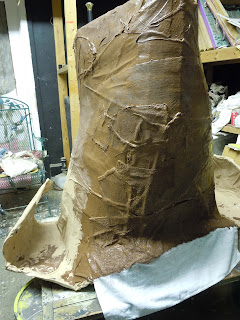 If you forward the hands of time to roughly 7 hours, you get the rough shape of a floppy cowboy hat.  It was time to apply several layers of fabric (old towels, T-shirts, rags, and 'retired' denim) and paint.  The paint stiffens up the fabric (which adds a great deal of structural integrity) and starts to smooth over the textures of the fabric.

By nine hours the hat was as covered as I could get without letting the hat dry overnight.  Here are a couple of detail shots of the beautiful texture created by the different types of fabric and an excessive application of latex paint. 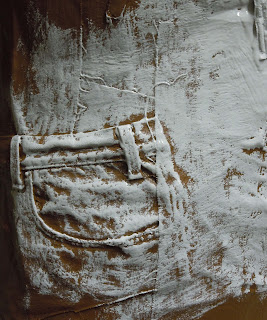 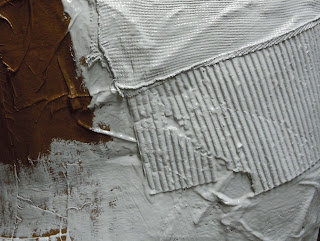 You can see the textures from blue jeans, corrugated cardboard, and a long underwear shirt.

After several days of adding some extra fabric (for texture and reinforcement), priming it several times to subdue the texture, and then blasting the hat with a dust-caked oscillating fan, I was ready to attach the hat to the body and inspect progress. 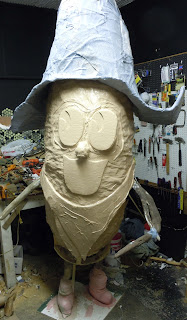 Much to my surprise and displeasure, the side parts of the brim sort of drooped out and down.  This gave the hat much more of the look of a nun's habit -not quite what I was aiming for.

The edges of the brim were too heavy to support their own weight, so they were going to need some assistance.  I decide to curl them back towards the main part of the hat instead of inserting some kind of heavy, and possibly bulky, internal support structure.  Add a few more days, and here is what you get:

Ultimately, the hat and body will have a similar surface treatment, but for right now, they are primed and will hang out for several weeks to dry and be scrutinized.  The verdict is still out on the height of the hat.  I may round it off at the lower edge of that black portion.  After what happened to Metropolis, if I were the hat, I might be nervous.....