Some Unexpected Coolness, Positive/Negative Shapes, and A Look At Proximity.

So back in October, at the closing reception for on-som-bel, I suggested to fellow artist Jen Evans that the two of us should create some collaborative pieces.  She agreed, and we kind of left it as 'something we'd get to in the near future'.  Well about three weeks later, it was the near future.

In a manner very similar to the exchange pieces I've done in the past with Heidi Hernandez and Terry Rathje, I want to pass off to Jen a piece that is only about 30-50% done so there is enough happening with the piece to suggest a direction, but plenty enough that is not done so she has a large amount of (artistic) freedom on how she finishes the piece.

The plan is for each of us to 'start' two pieces and 'finish' two pieces.  I'll probably give her the choice between several pieces which two she wants to tackle, -probably.

I am in the process of 'reclaiming' a few old canvases and also 'reconfiguring' some other works.  More on the 'reclamation' bit in a future post.  What you see below is one of those 'reclaimed' canvases with elements from a different canvas (a piece with a heavier relief component that I sawed apart) on top. 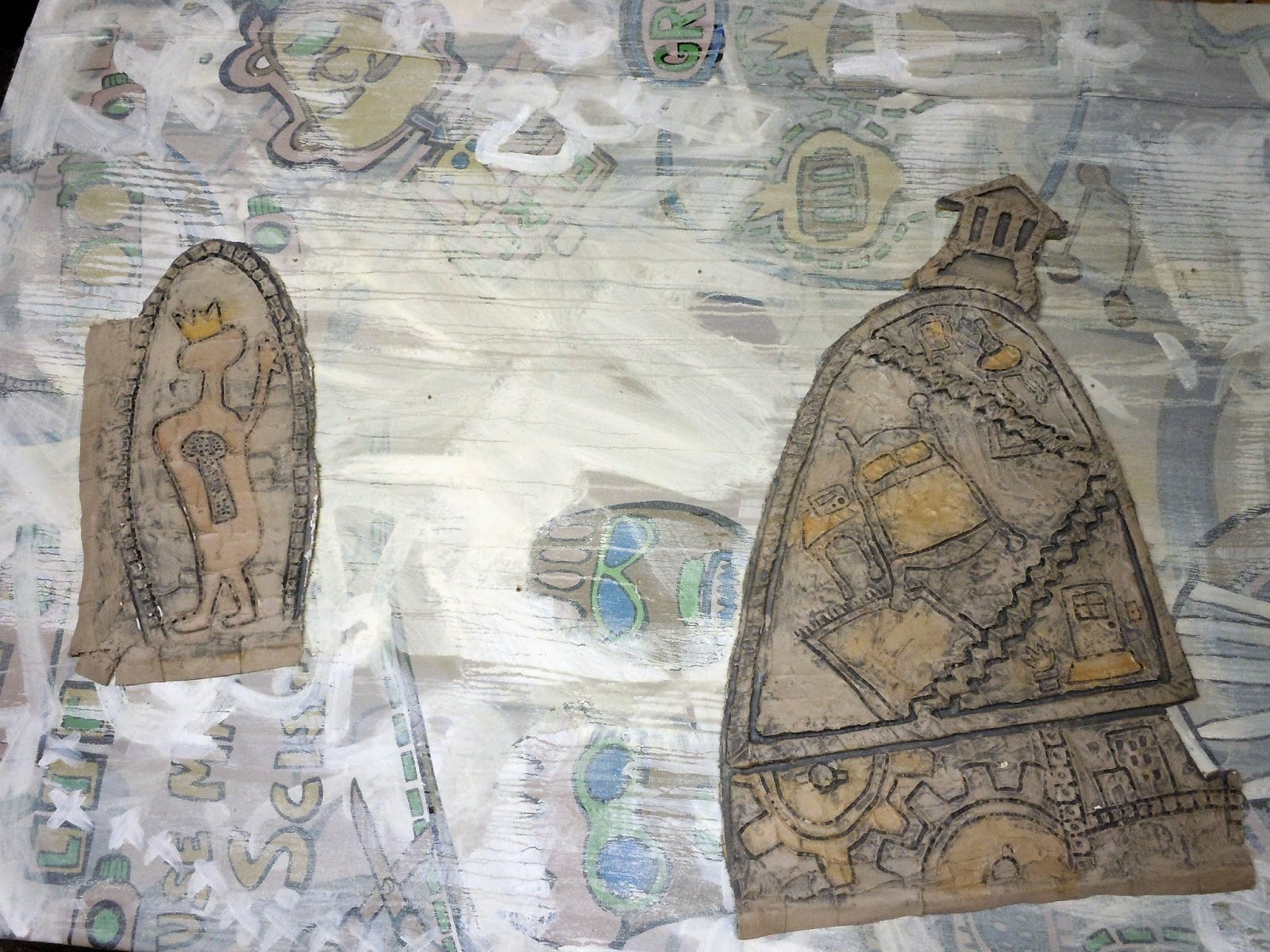 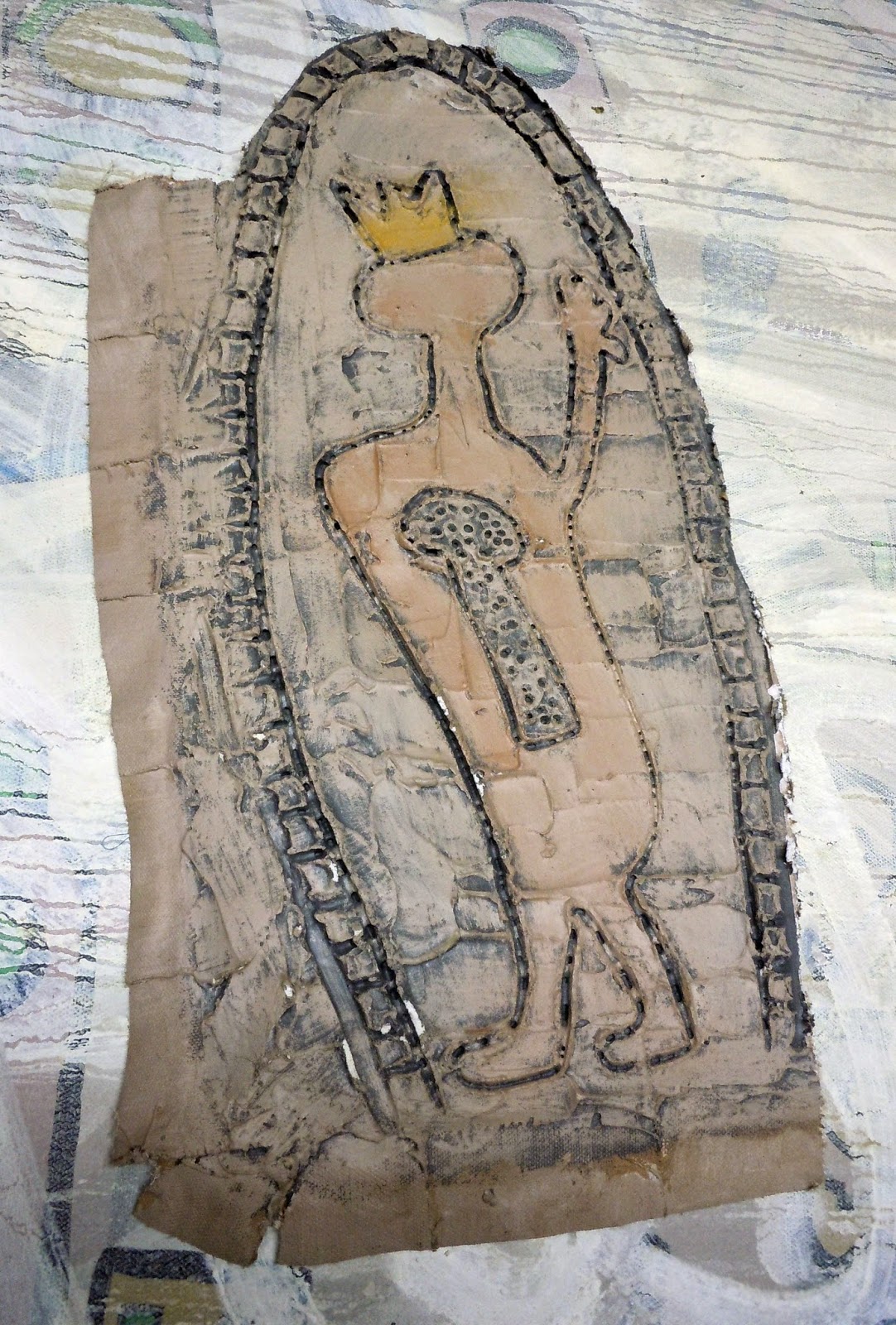 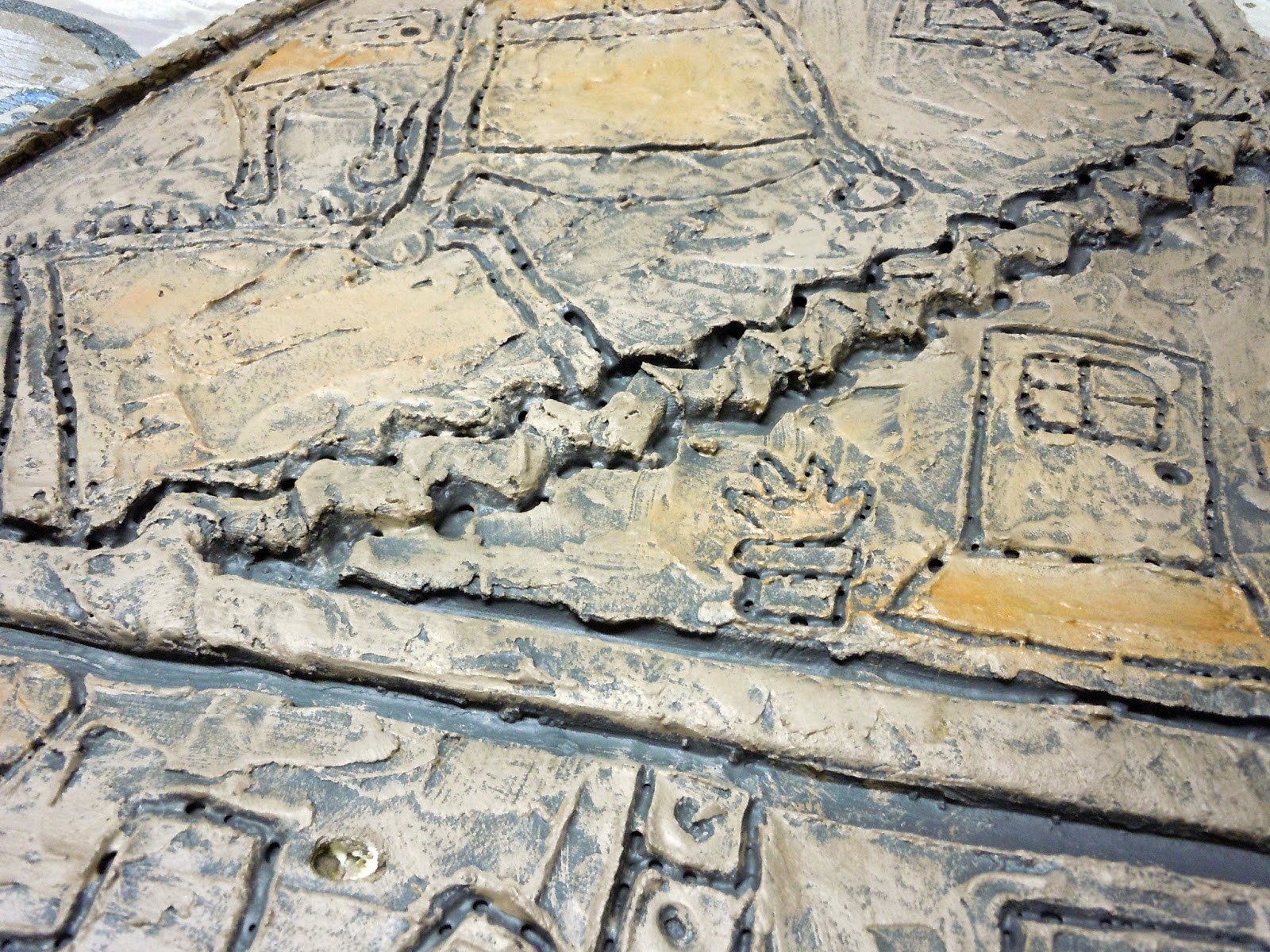 While developing my 'start' pieces, I have been playing around with different shapes trying to solidify a composition (or two).

No matter how many times I mess around with this, I still find interest in moving visual elements around on a canvas to see how they interact with each other, -especially seeing that moment when 'two things' move close enough together that their proximity makes them visually become 'one thing'.  The two '3s' below are two separate objects in the first picture, with only some relationship existing between them. 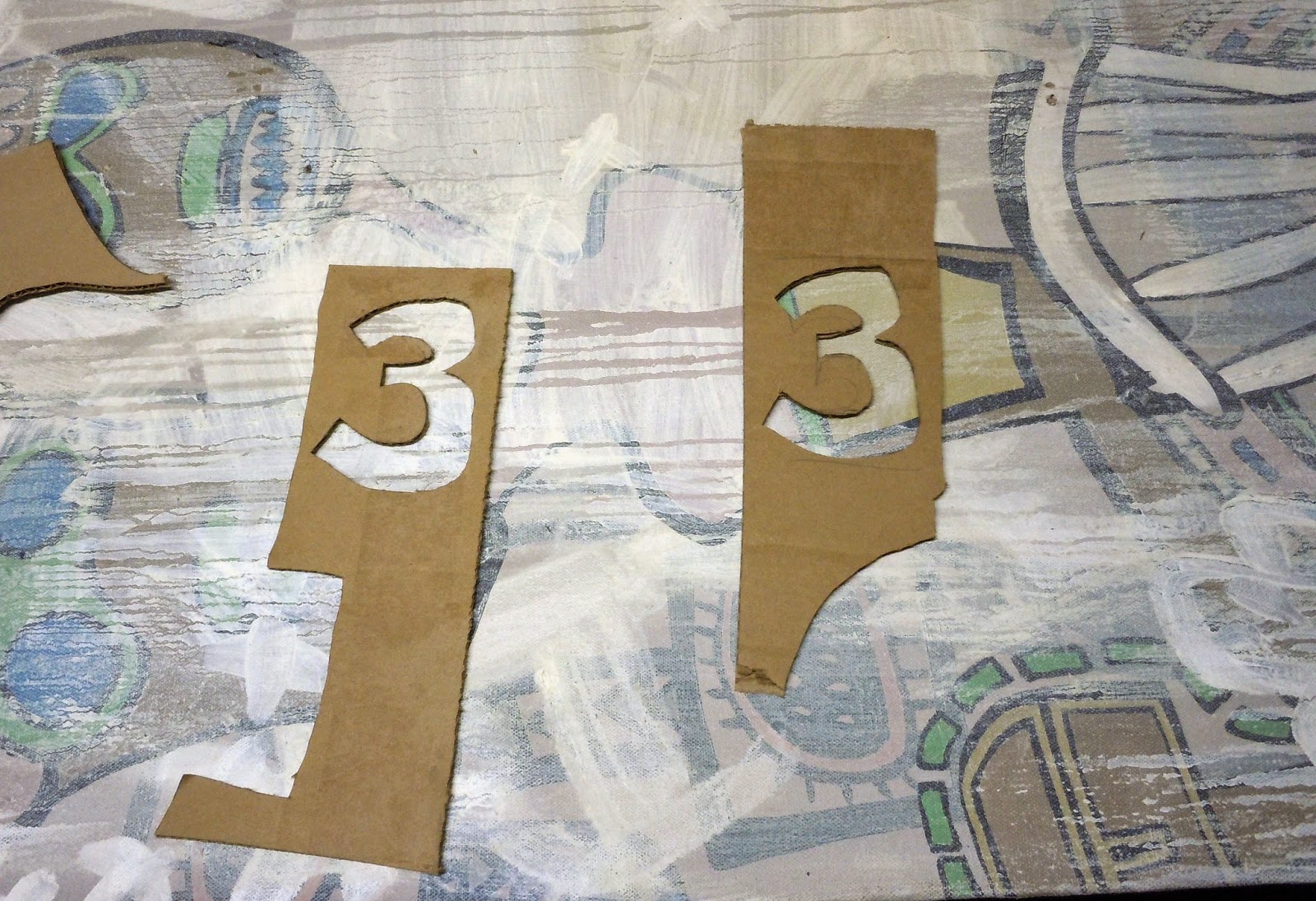 As they move closer though, they transform from being two individual '3s' into '33'. 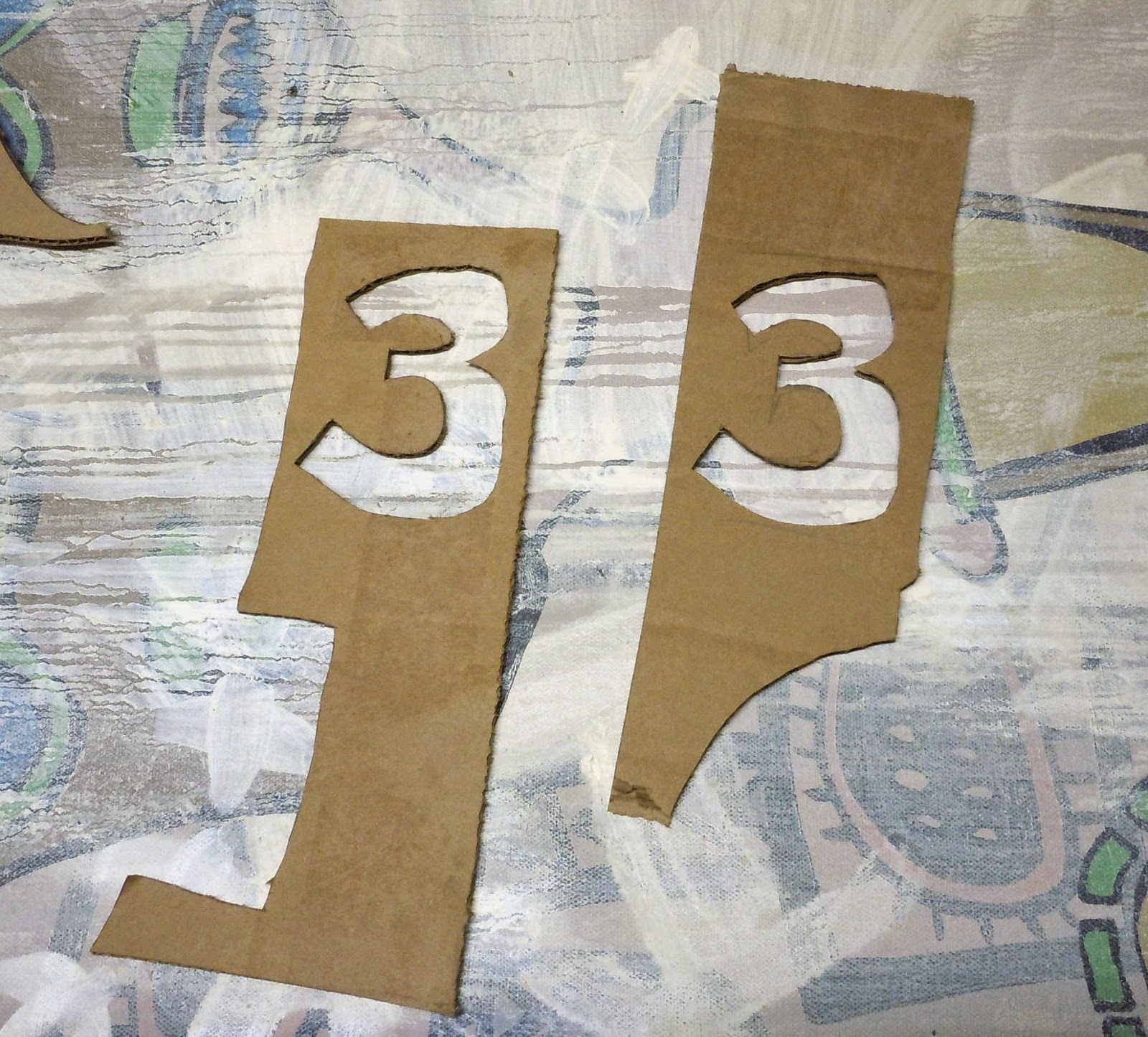 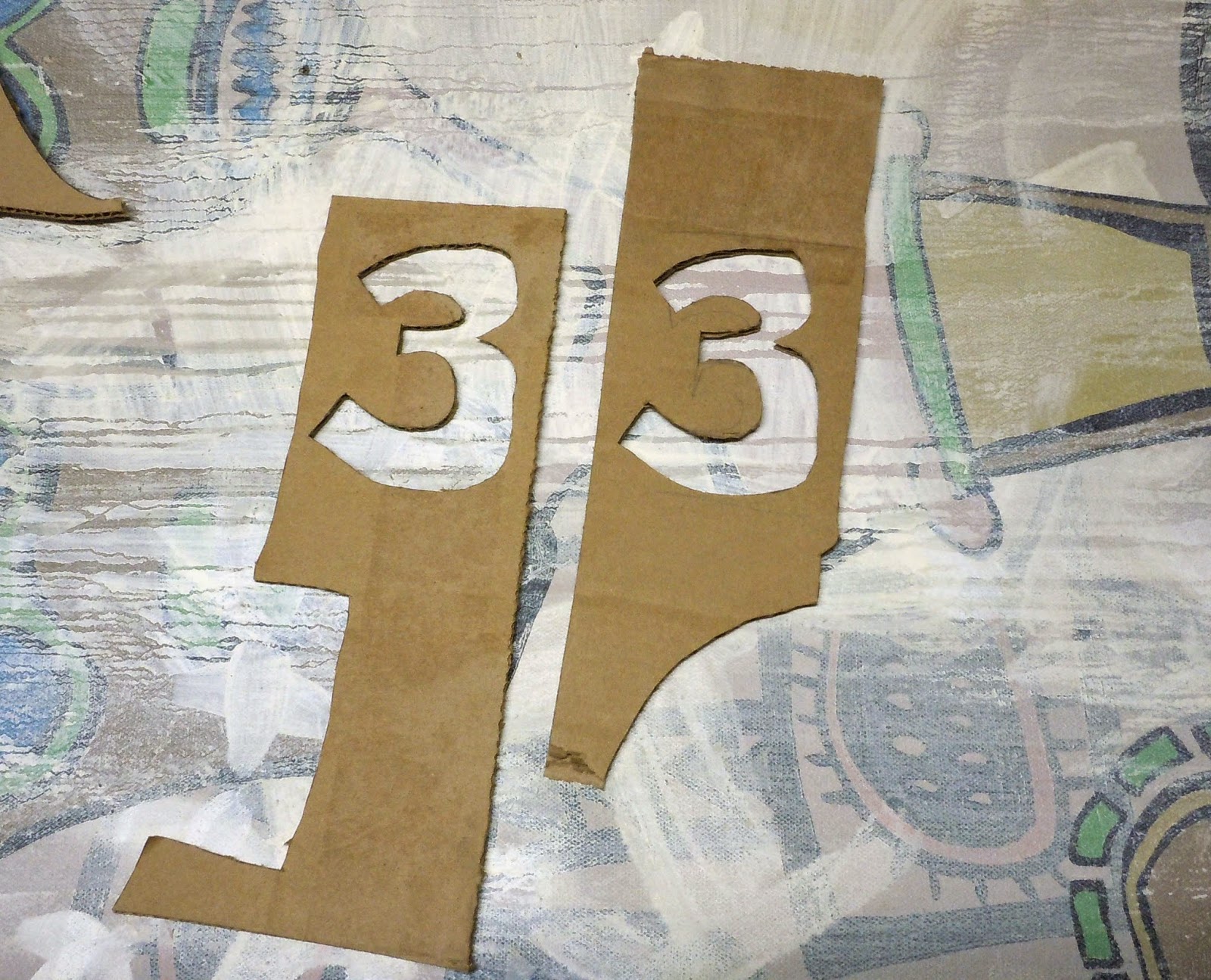 Watch what happens when I 'leap-frog' the '3s' and the open spaces at the bottom begin to interact. 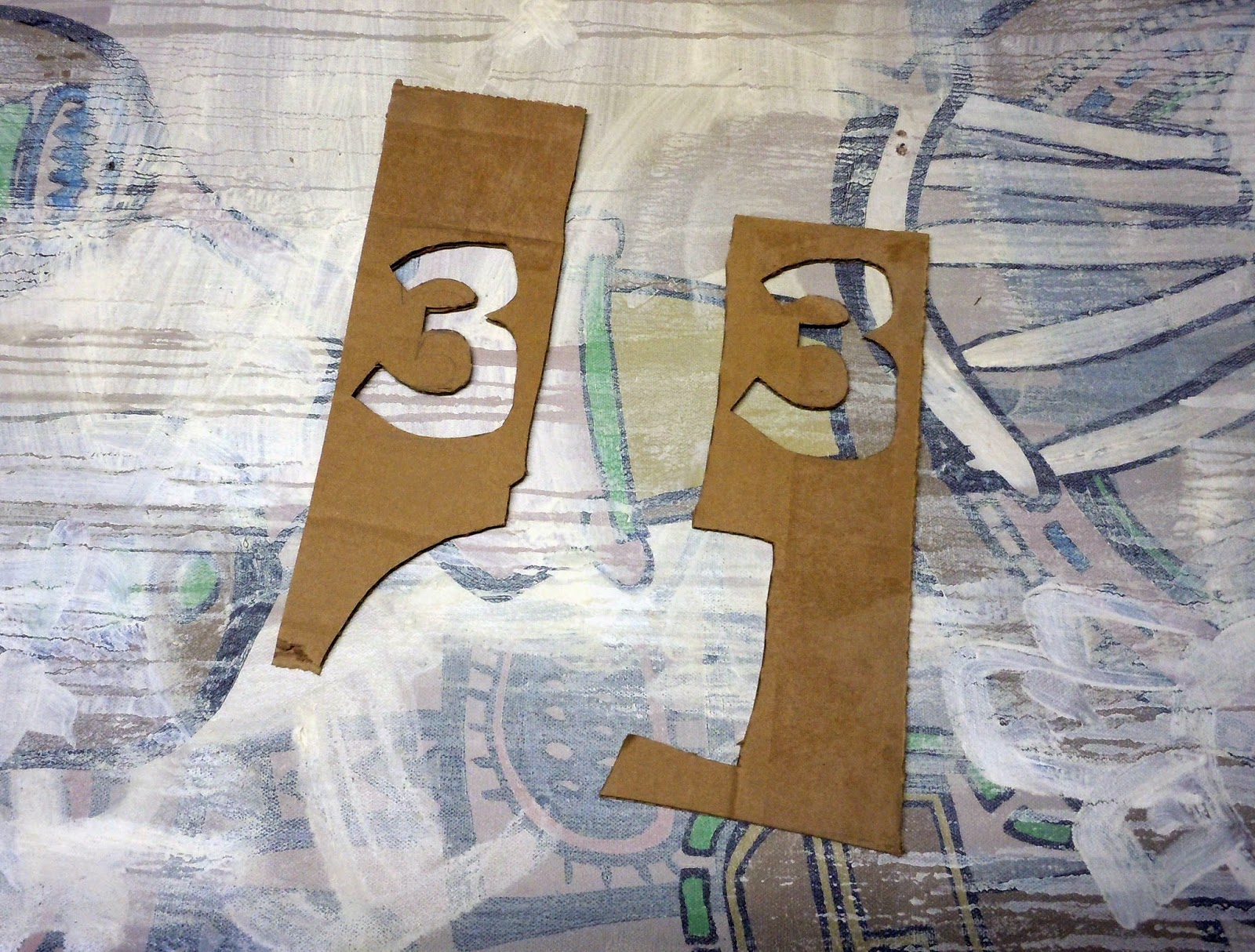 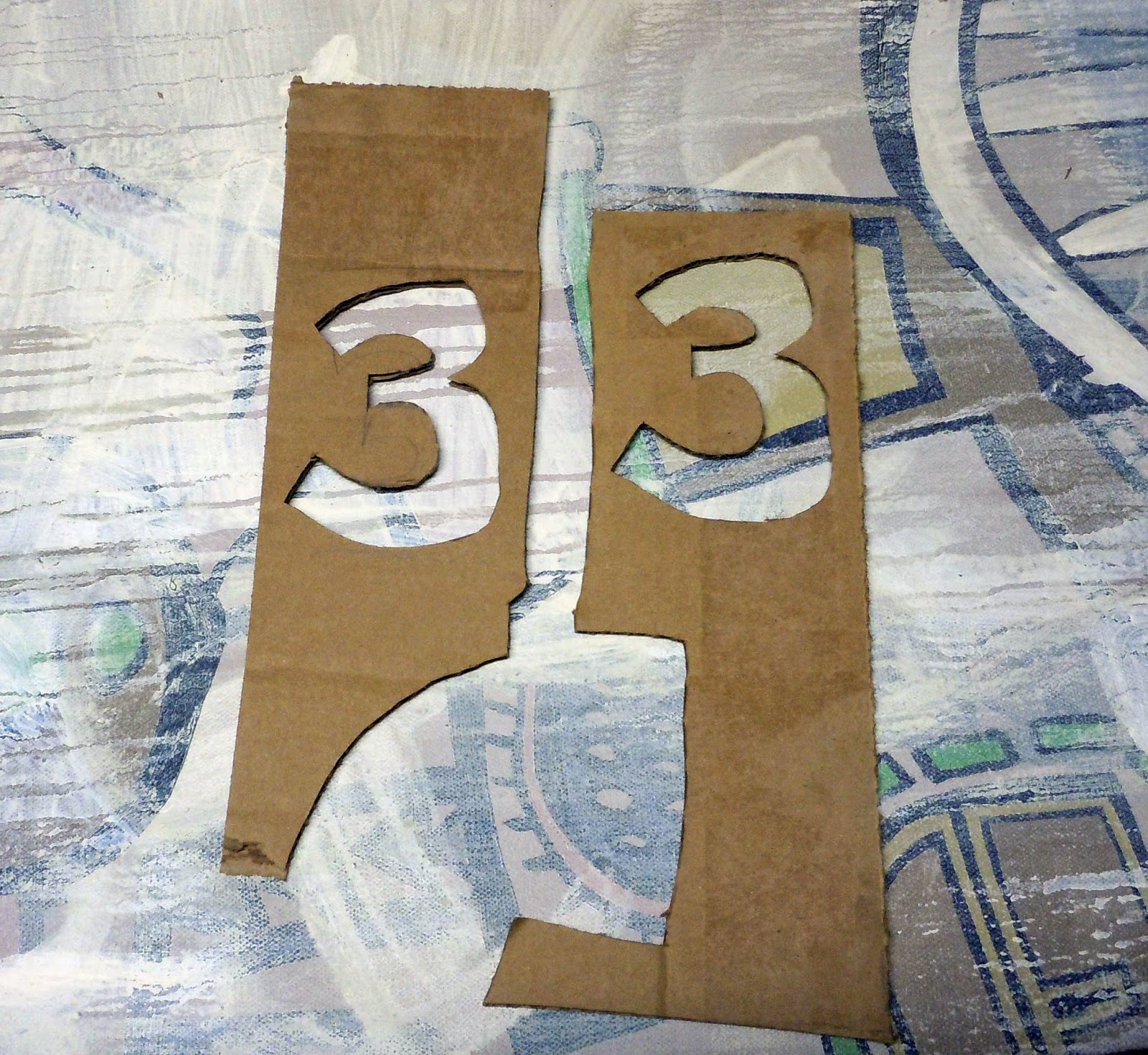 The same thing starts to happen when I slide this bit of cardboard (with the portion of a hand) towards the '33'.  All of a sudden, its proximity causes that negative shape to become perceivable/articulated and therefore become 'energized'.  If the positive shapes are too far away, then the negative shape doesn't fully materialize, if they are too close then it gets suffocated. 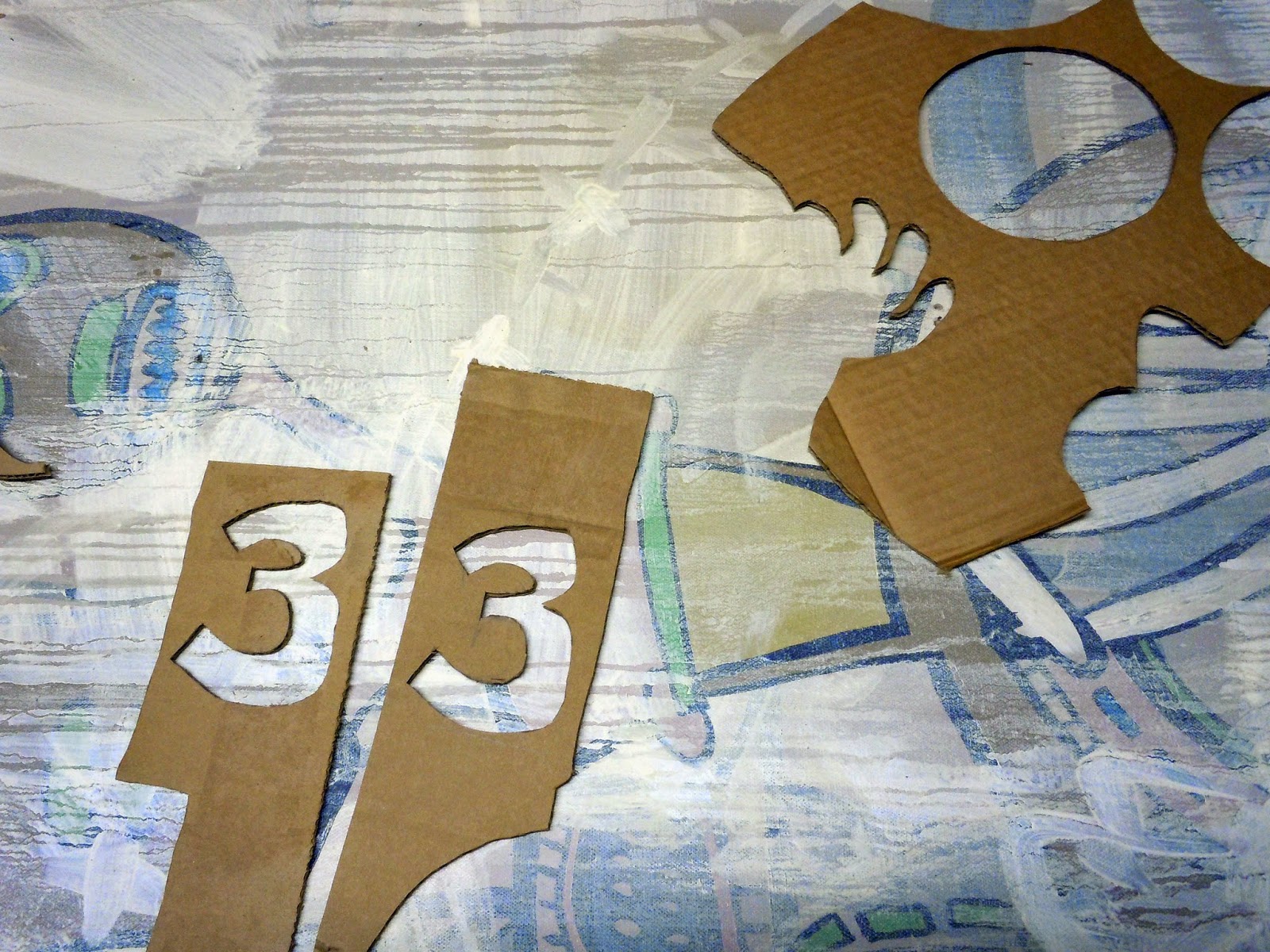 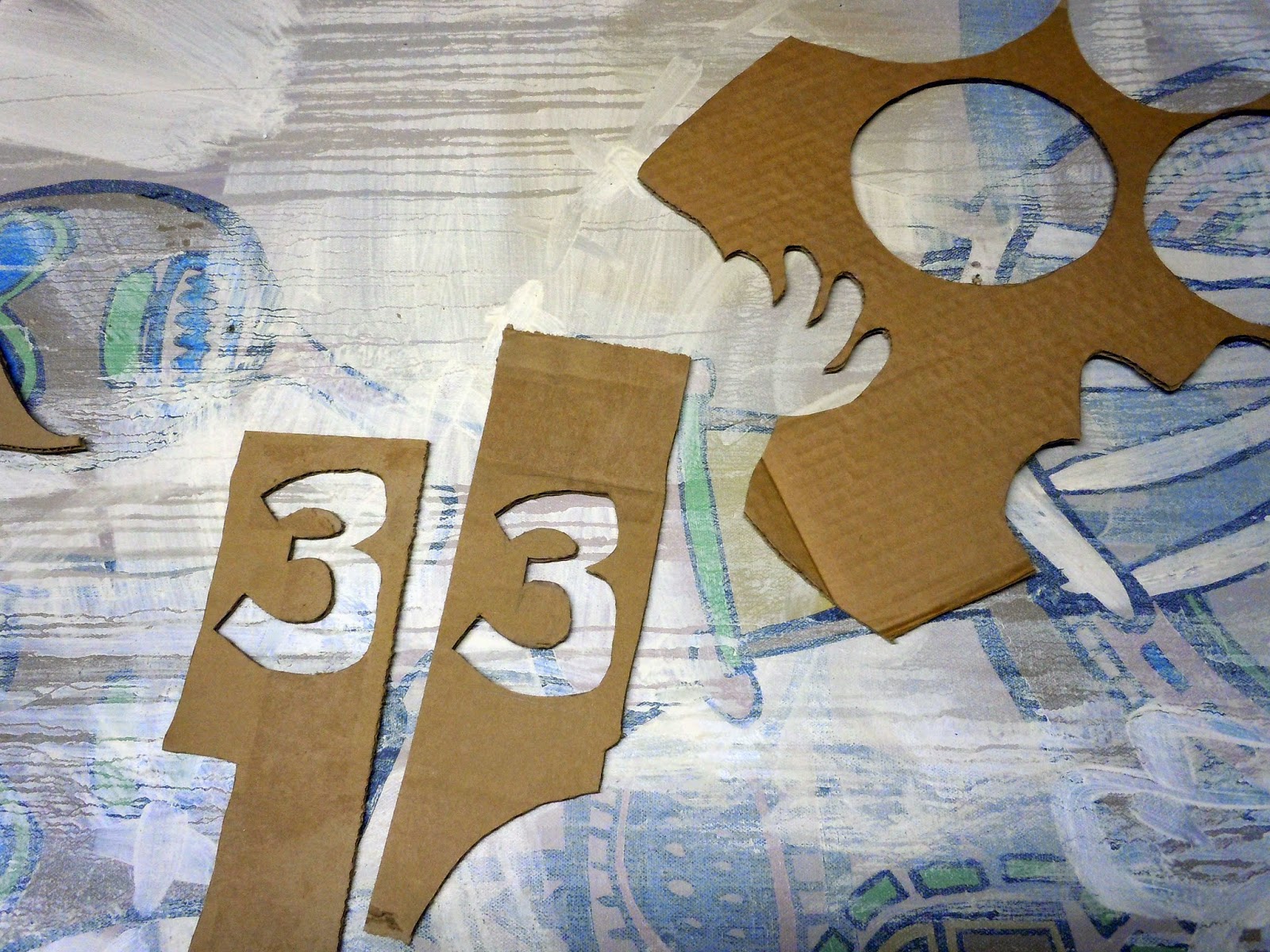 Also repeating a shape causes some visual dialog/tension within a piece. 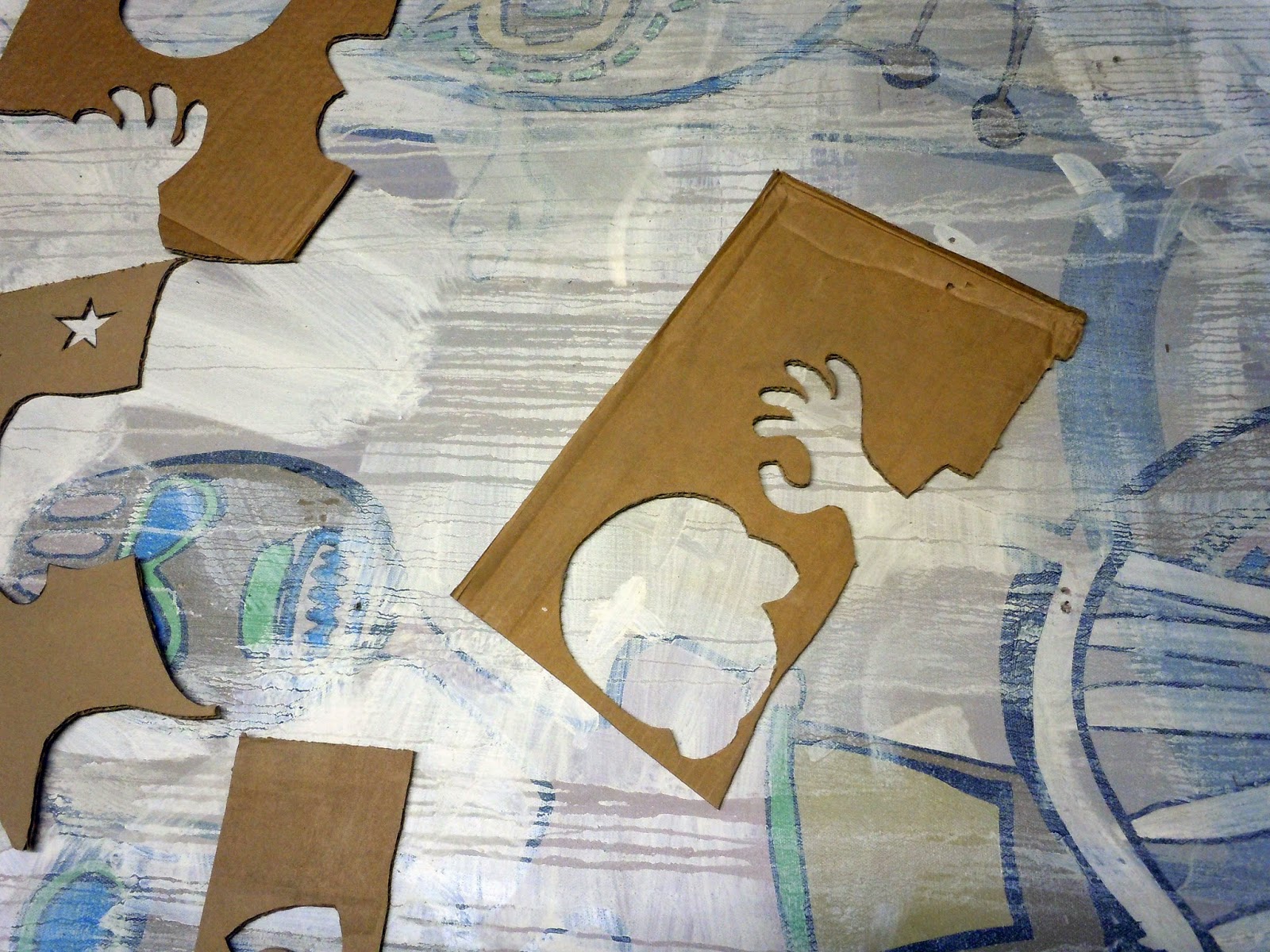 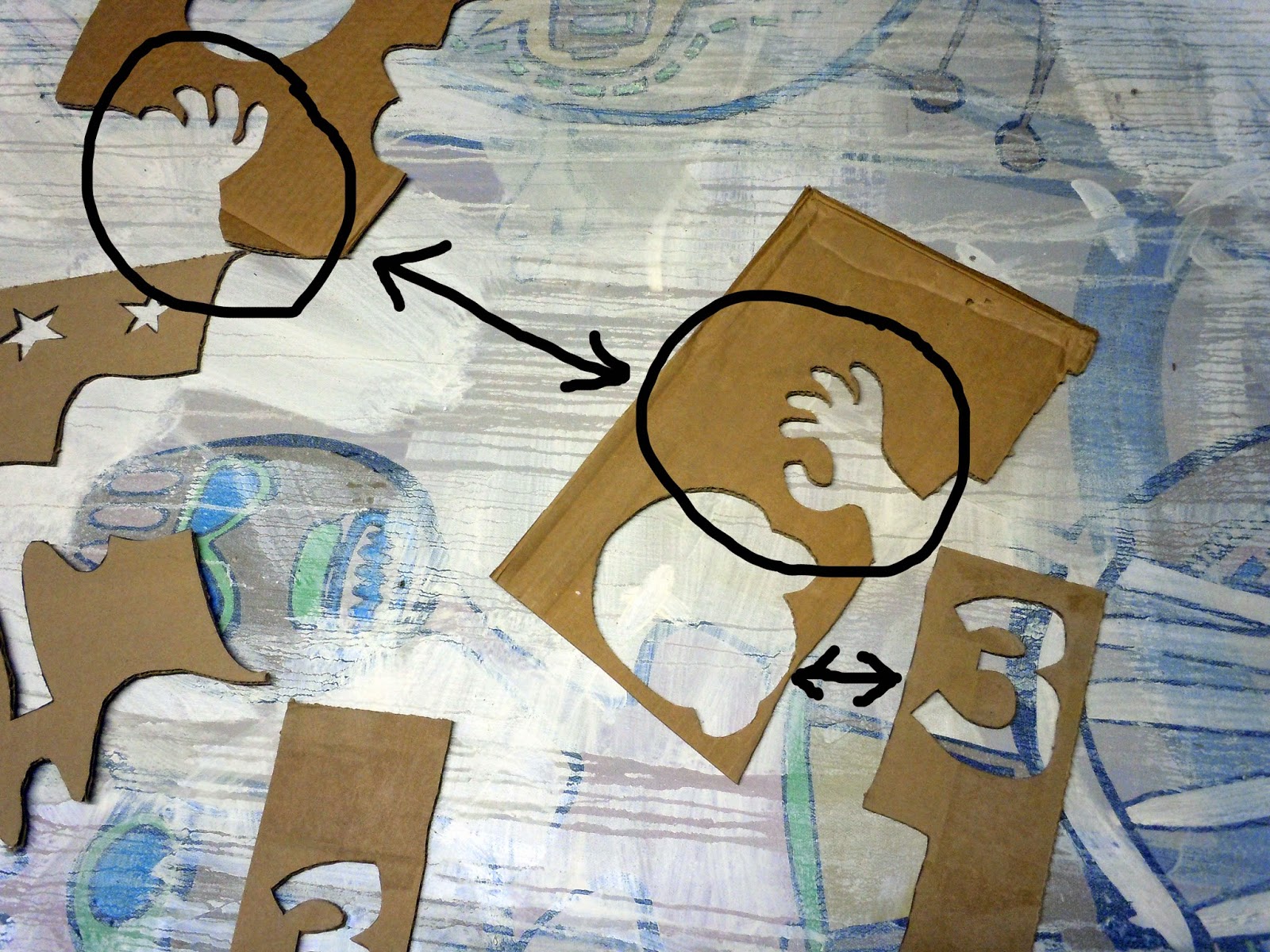 The two hand shapes have a tight similarity which causes a visual call-and-response to happen.  Also note that I slid in one of the '3s' closer to help define the negative shape by the 'hand'.

For my other 'start' I want to build some physical versions of little objects/creatures/glyphs that I occasionally paint onto some of my canvases.  After figuring out what I want to make, the first step is to cut out the ovals, the oval rings, and some arrows. 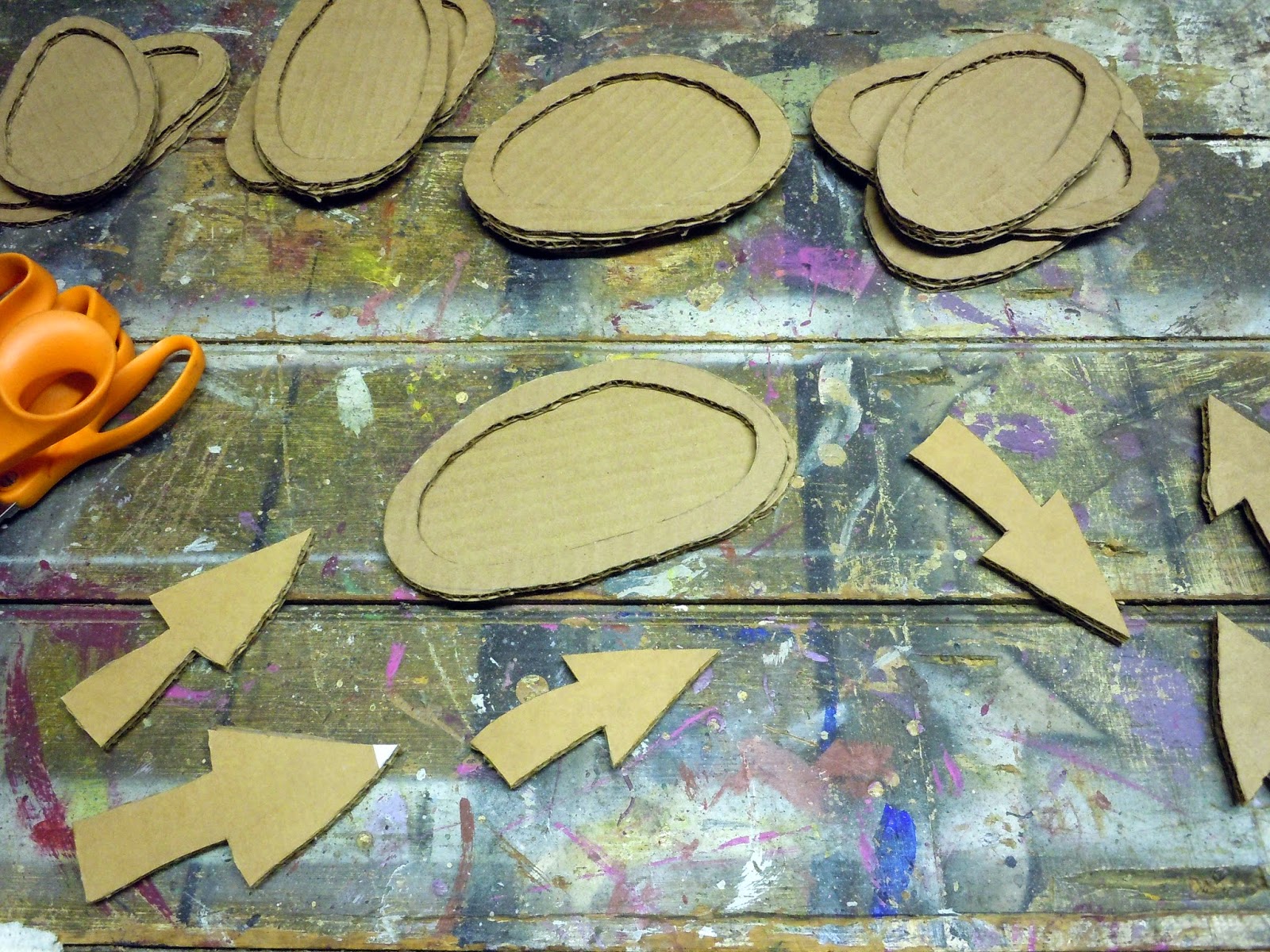 I find some nice textured fabric from my fabric stockpile/bin, and begin the (occasionally painful) process of hot gluing the fabric to the cardboard bases. 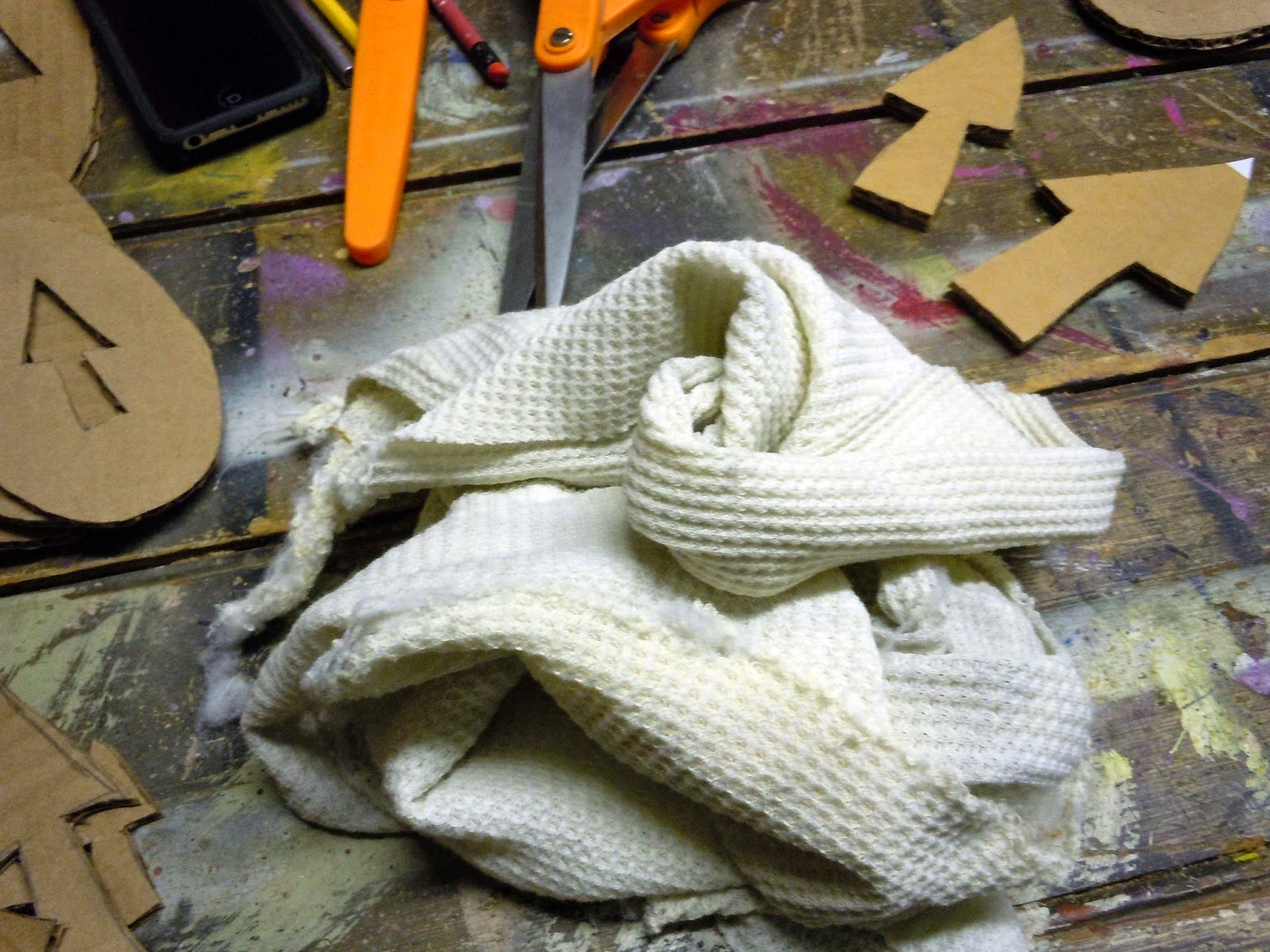 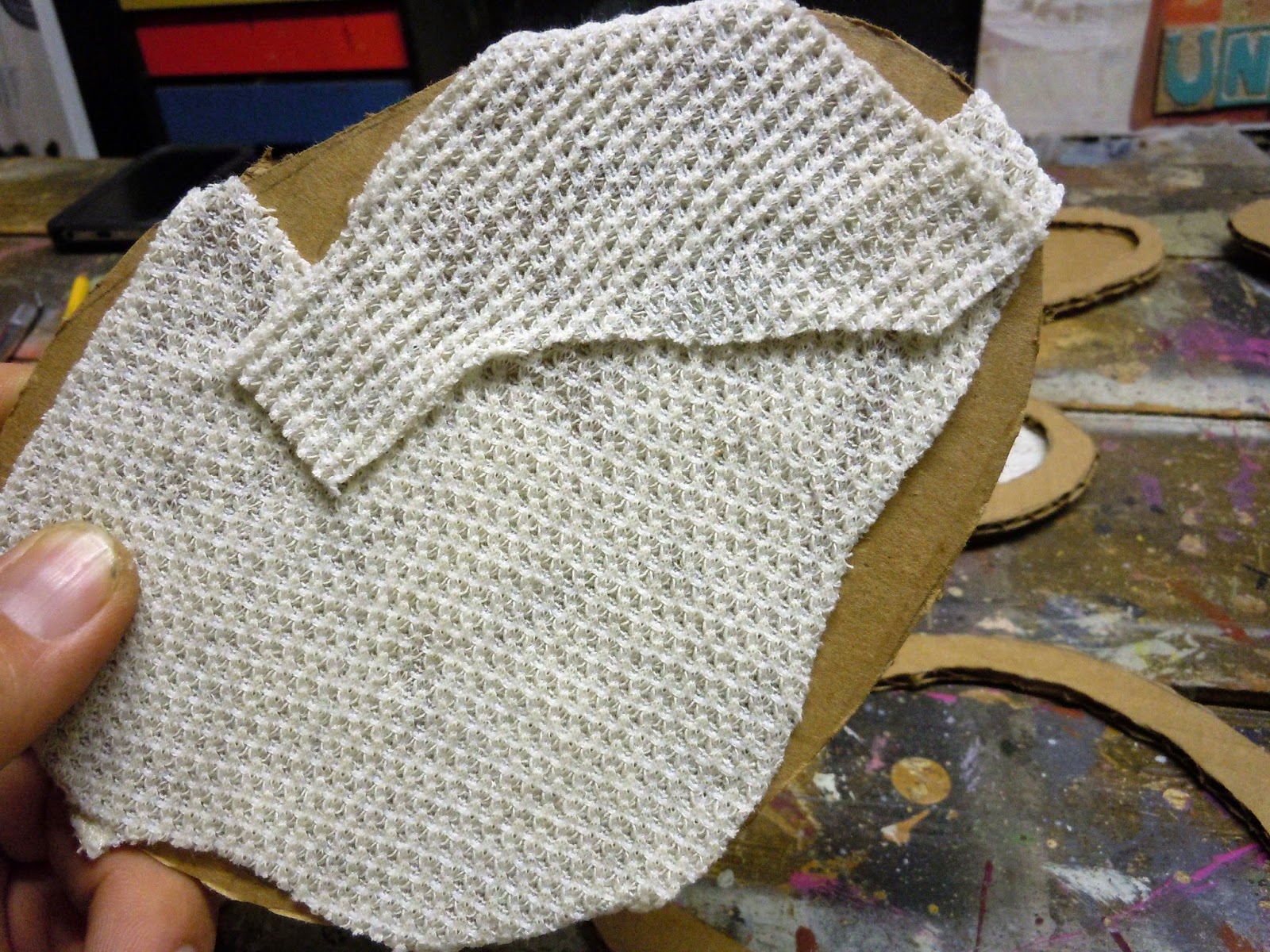 One oval done, several to go. 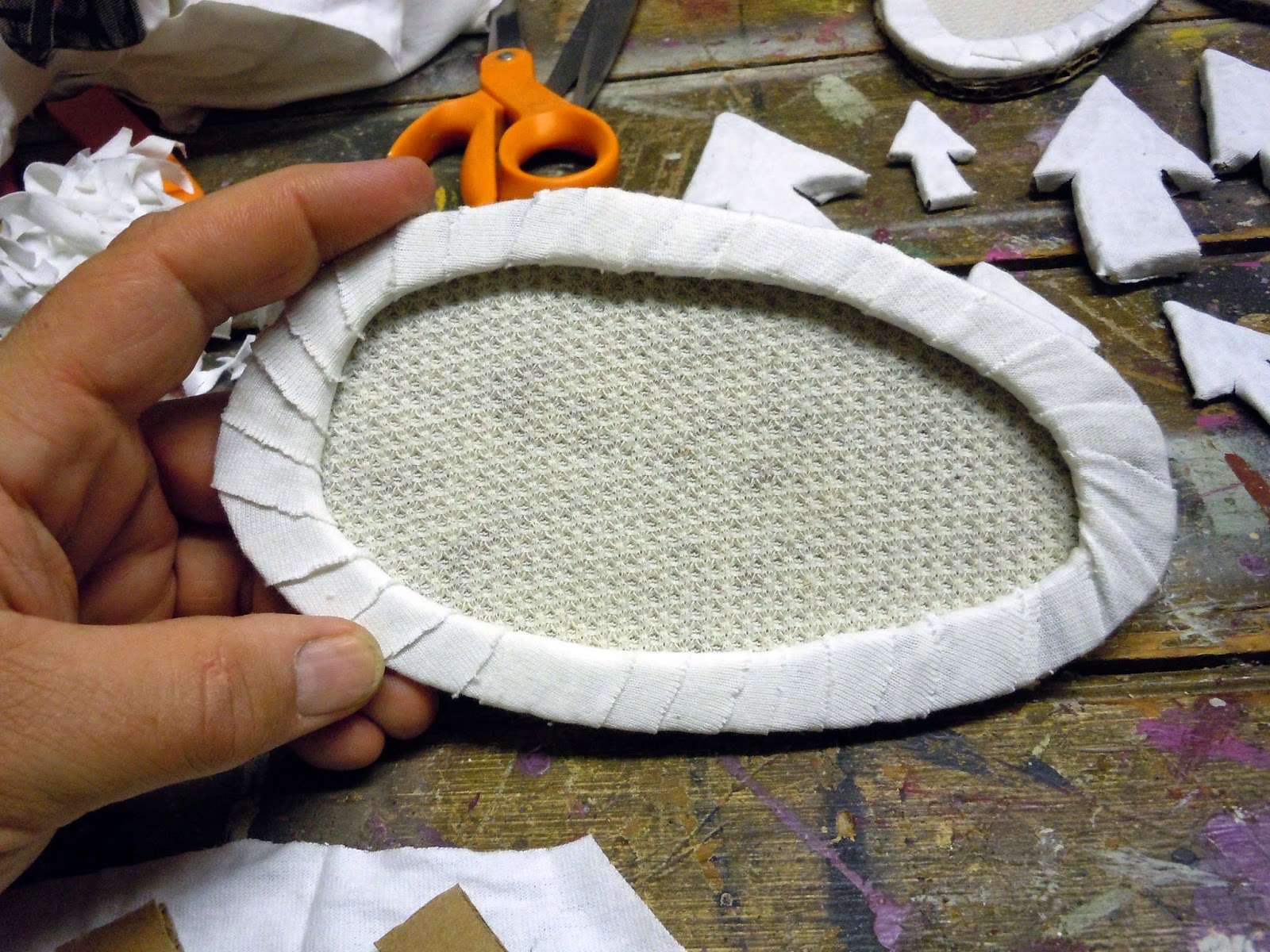 A few hours later, a small pile of ovals. 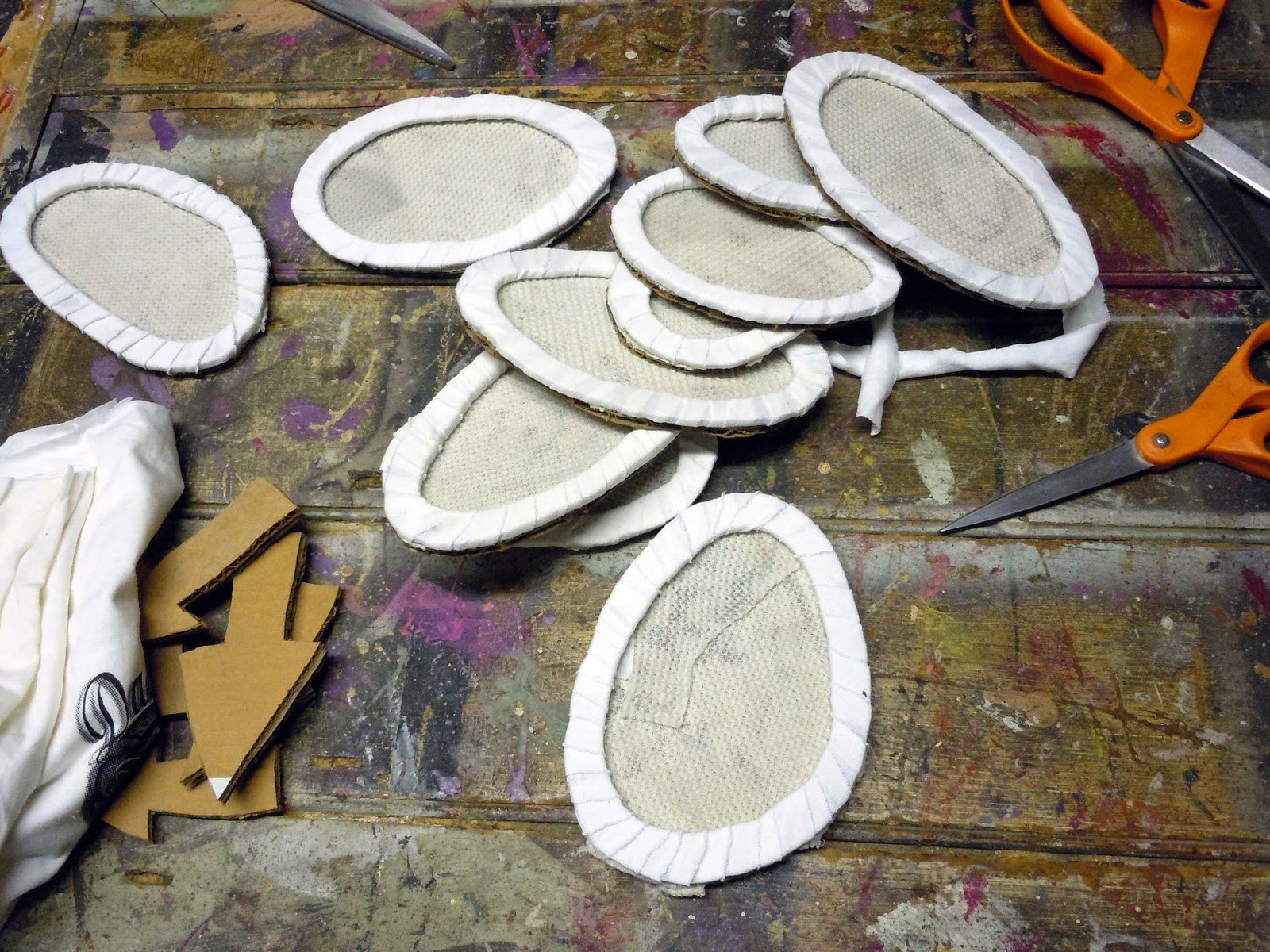 After cutting out the 'oval rings' I was left with a small stack of egg/oval shapes.  Although I was loathe to throw them away...... 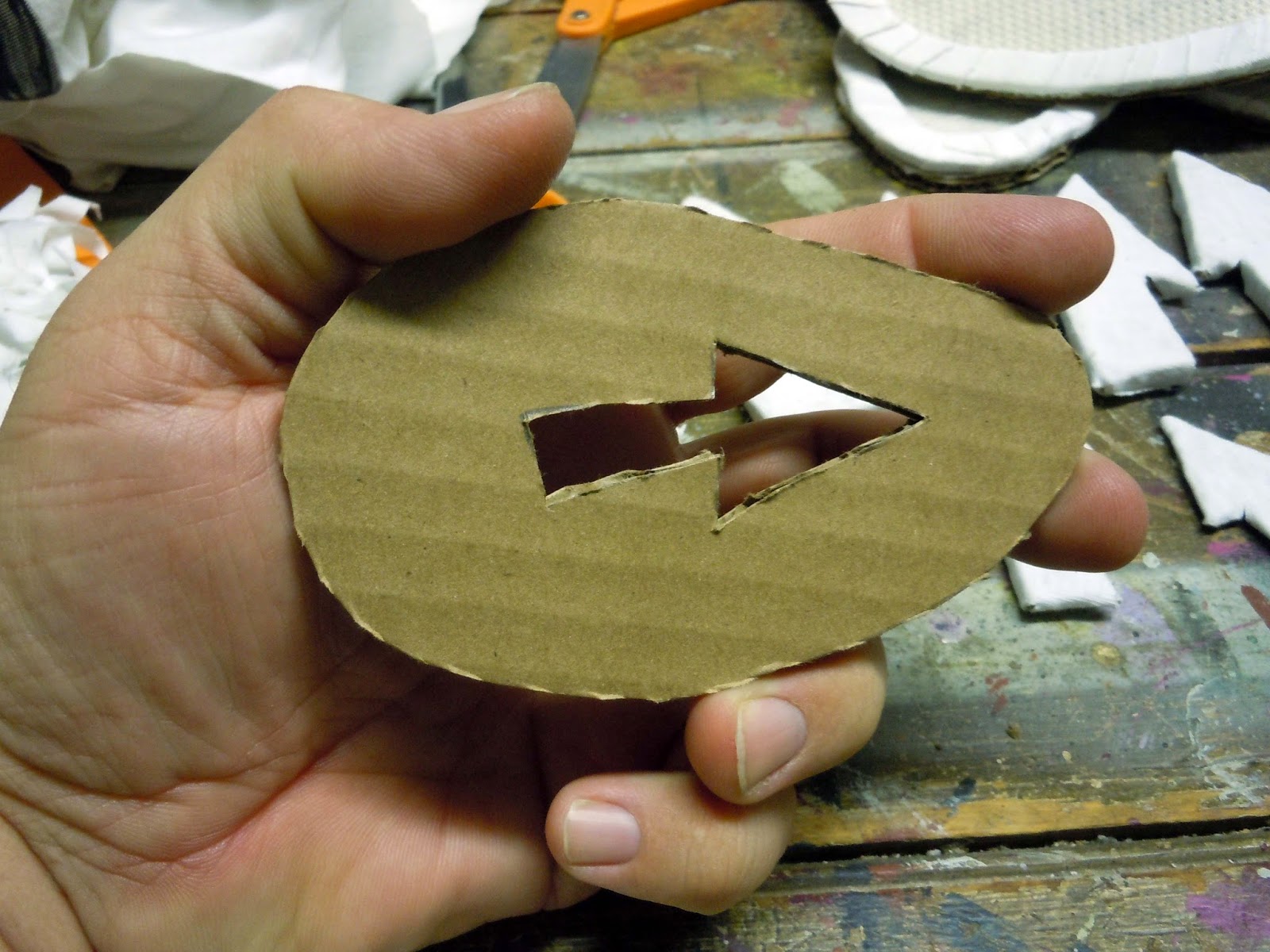 ......I just spent the last several days cleaning all the scraps/refuse of things I was loathe to throw away out of my studio.  I gave myself five minutes to come up with a use for them otherwise they had to go. 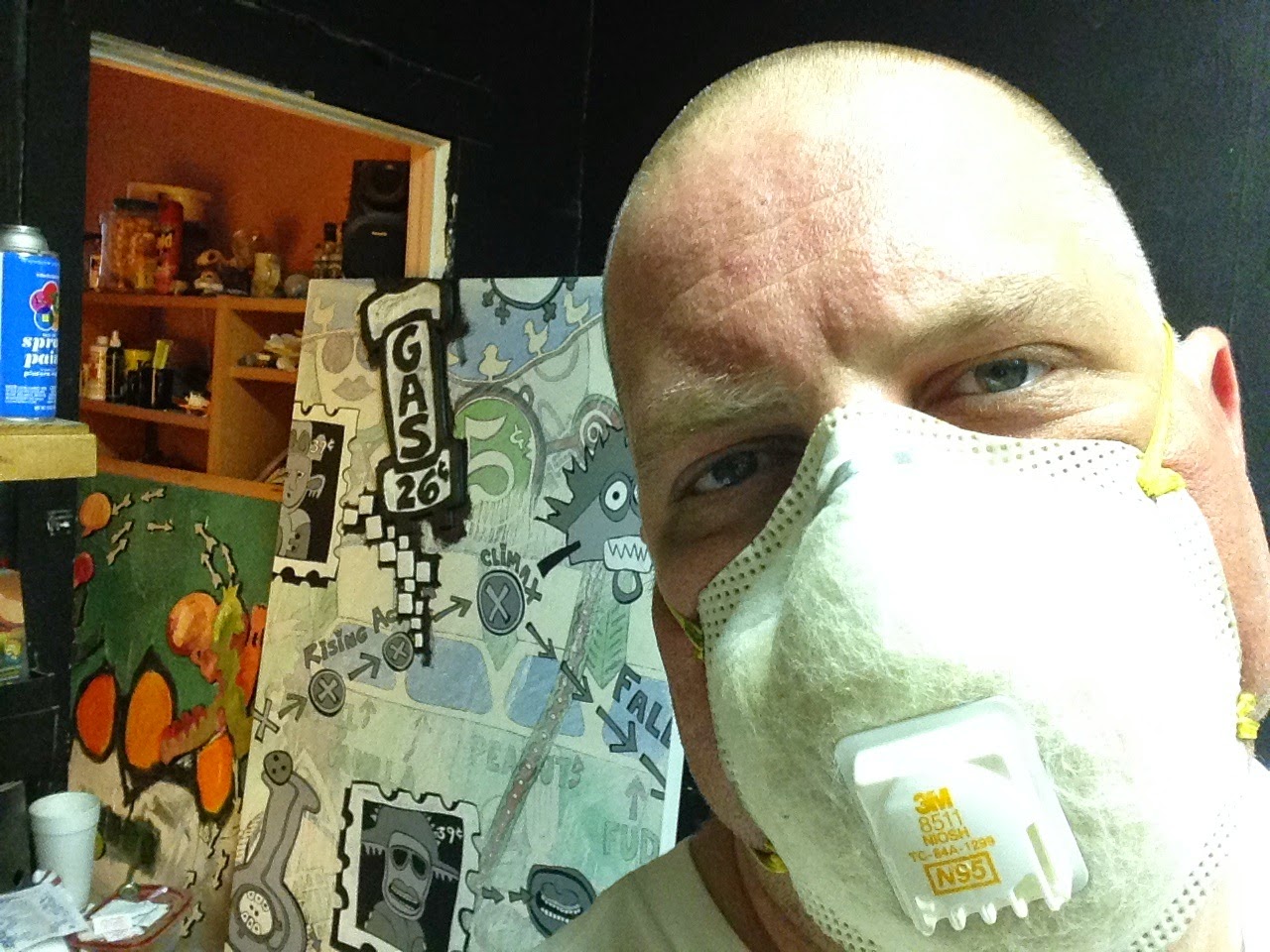 About 30 seconds later I decided to cut out small arrow shapes in the centers of the eggs/ovals.  I could use more (smaller) arrows for my start, and the egg/oval shape with an arrow cut out can easily be used down the road in a future piece or pieces. 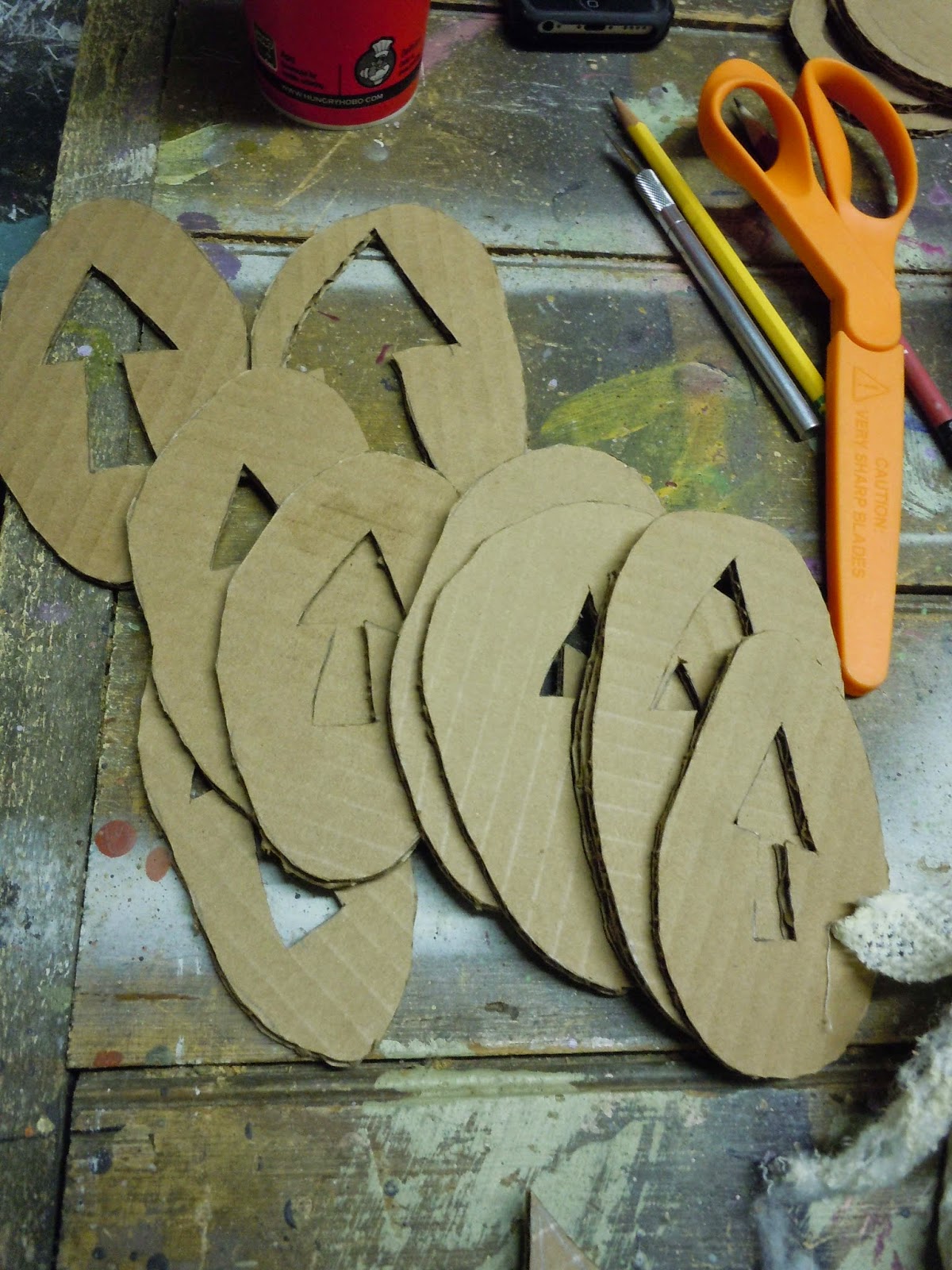 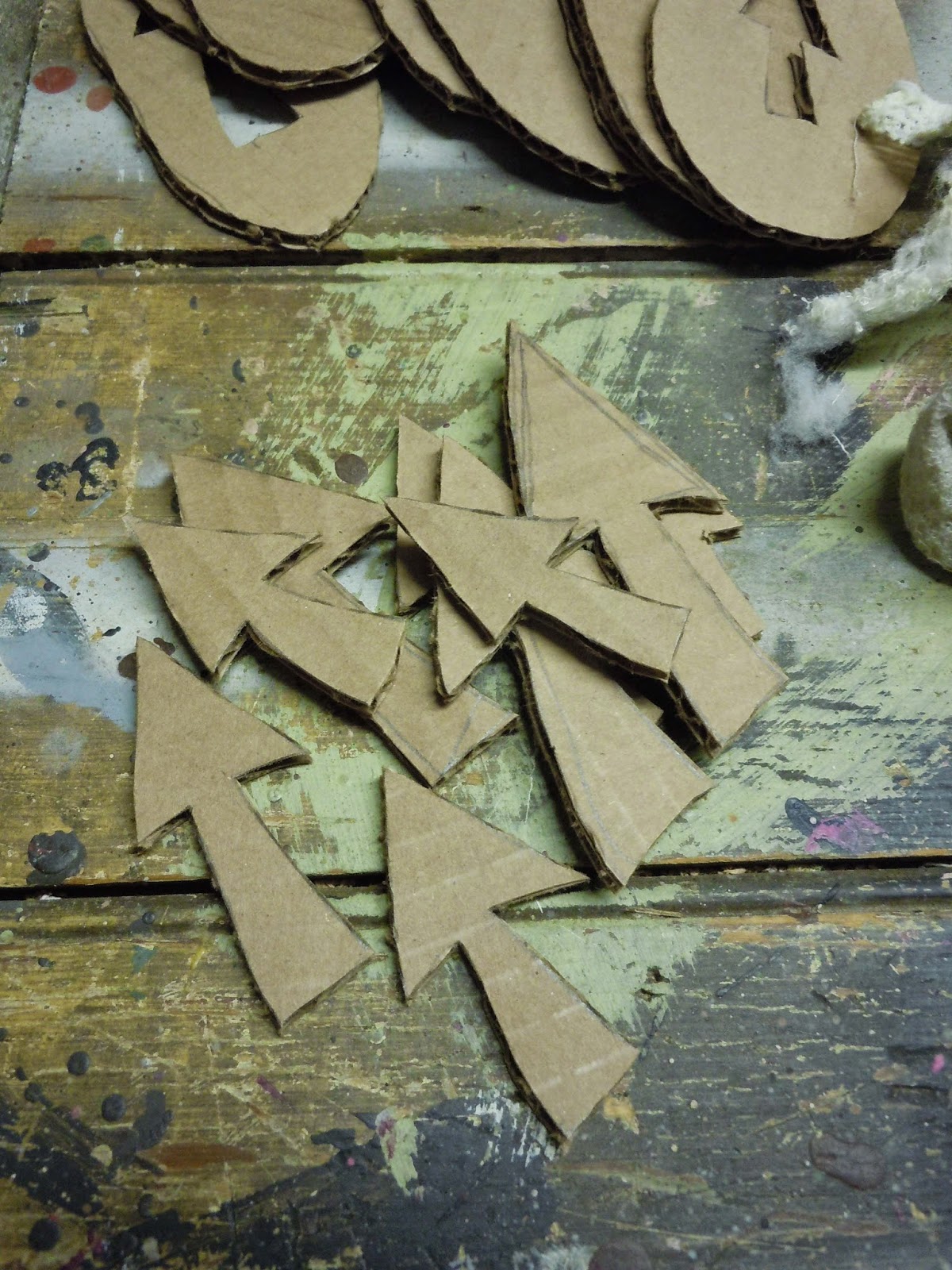 Now it's time to wrap all of the arrows with fabric. 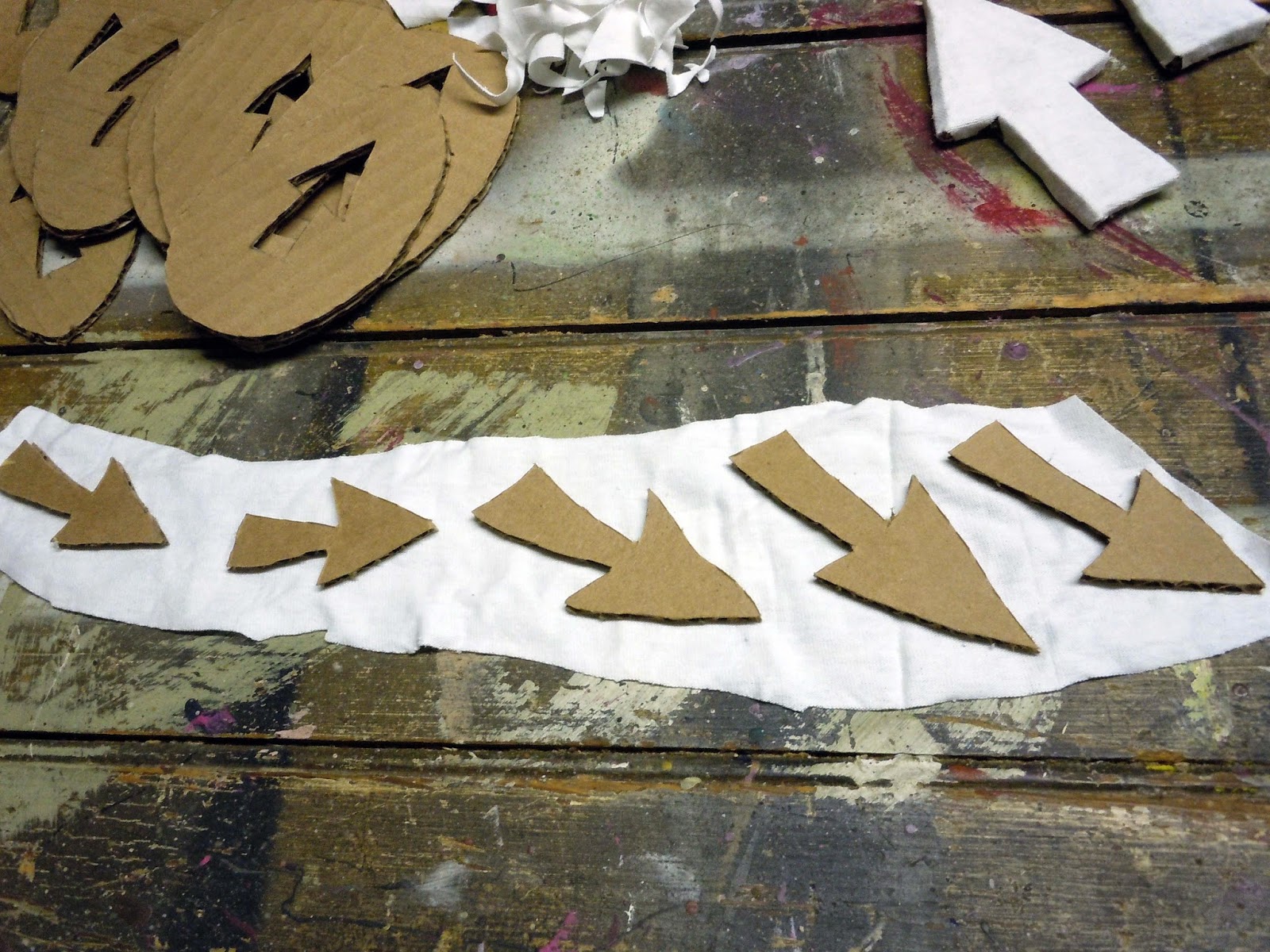 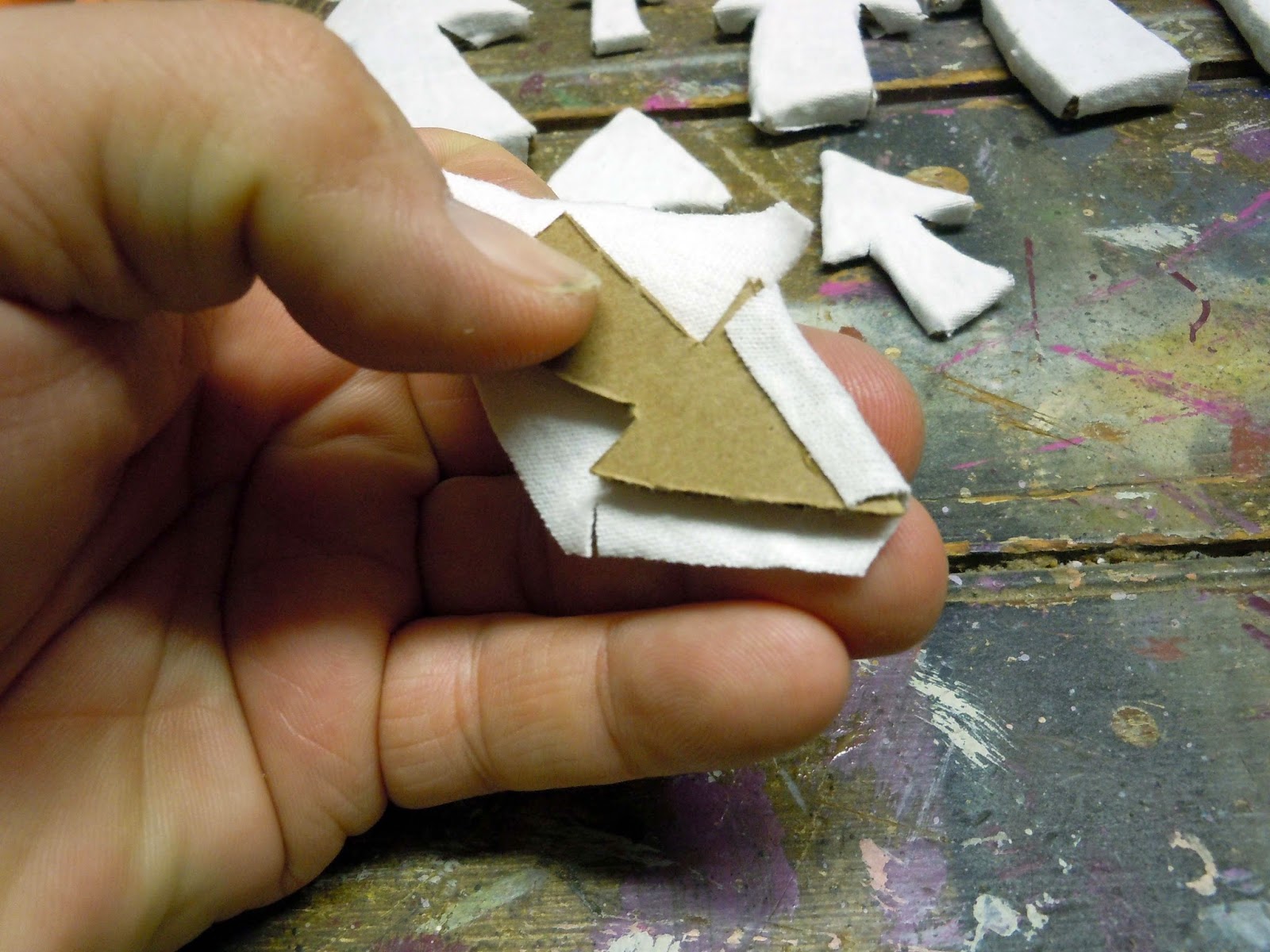 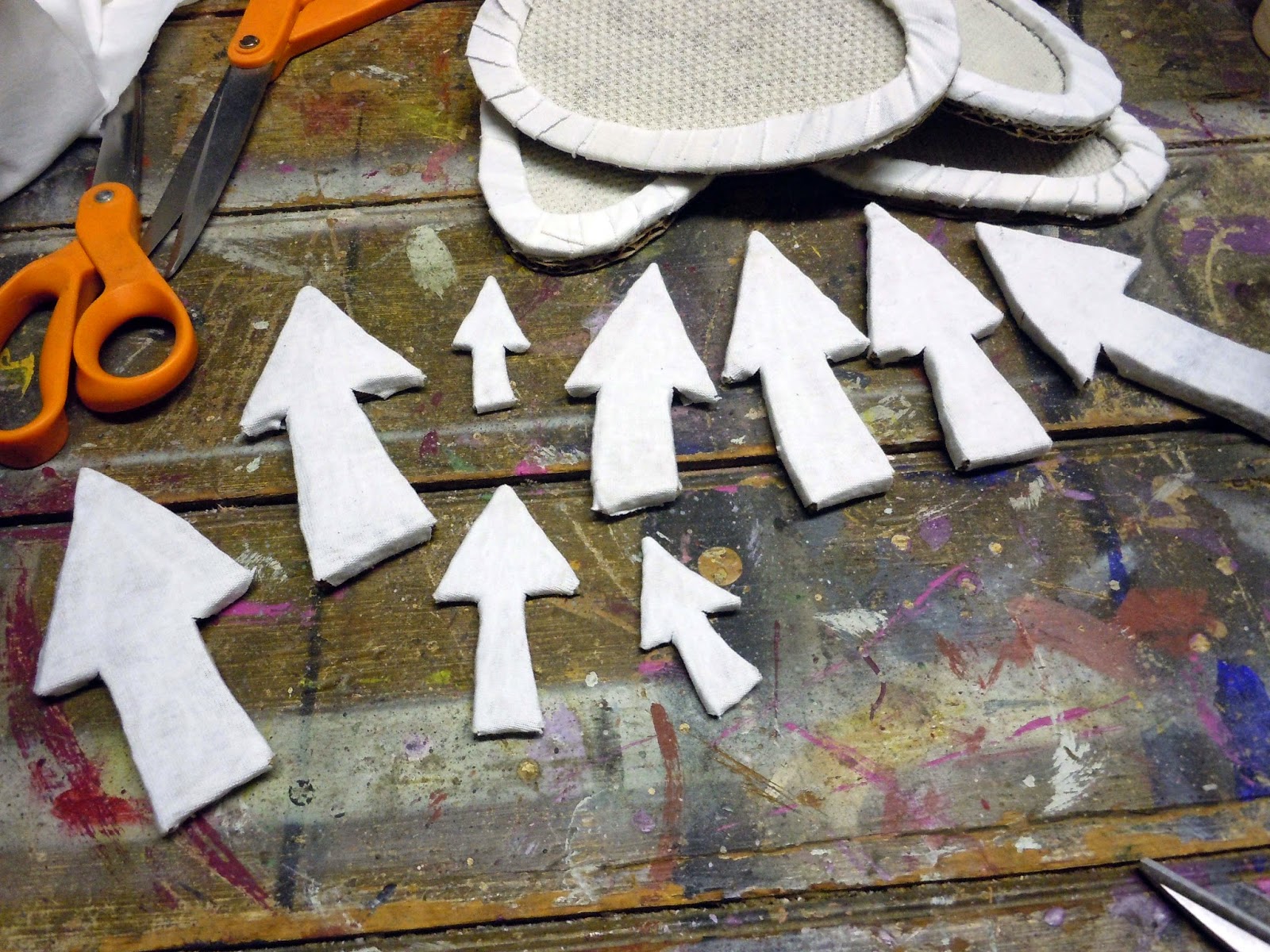 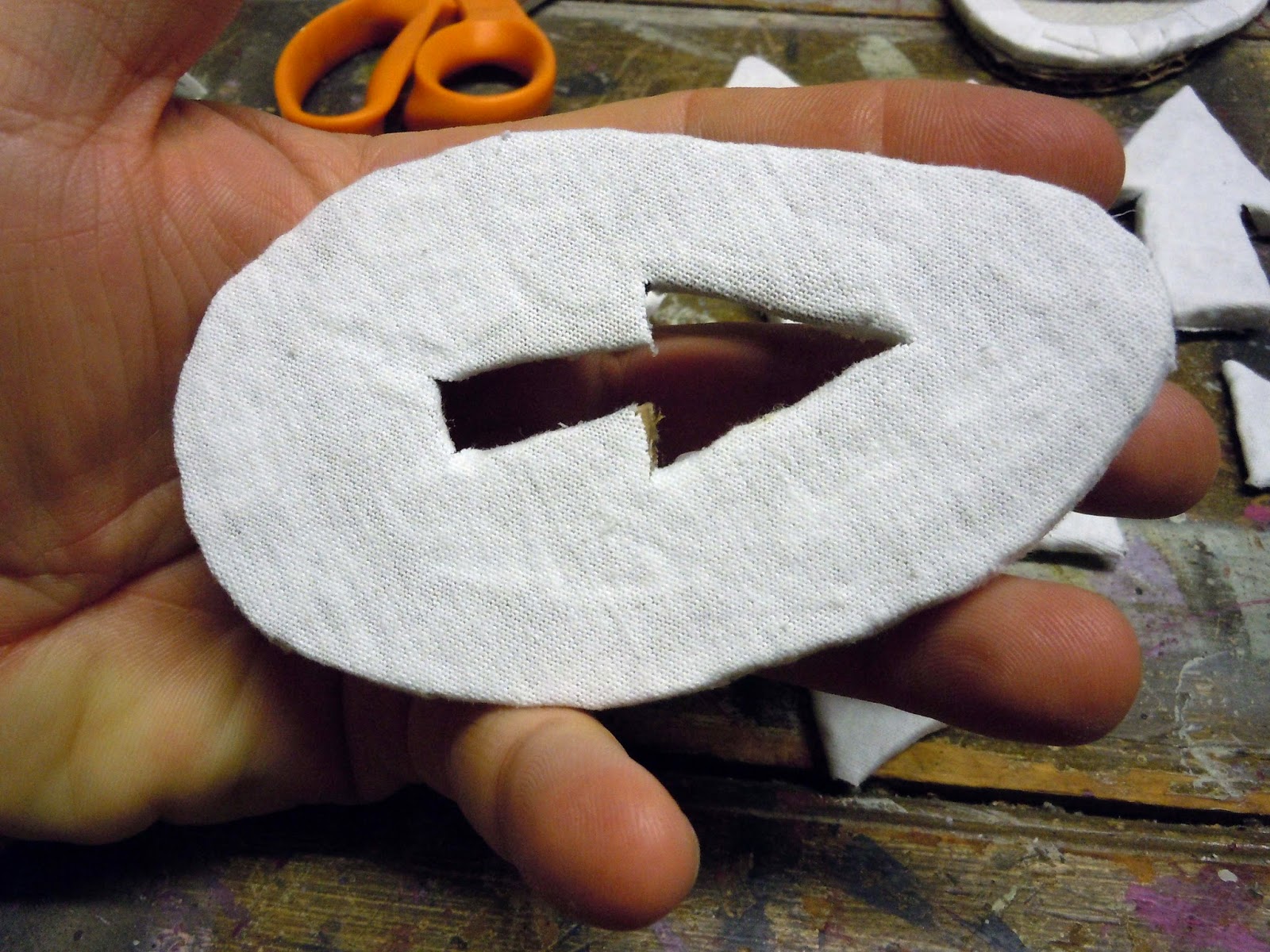 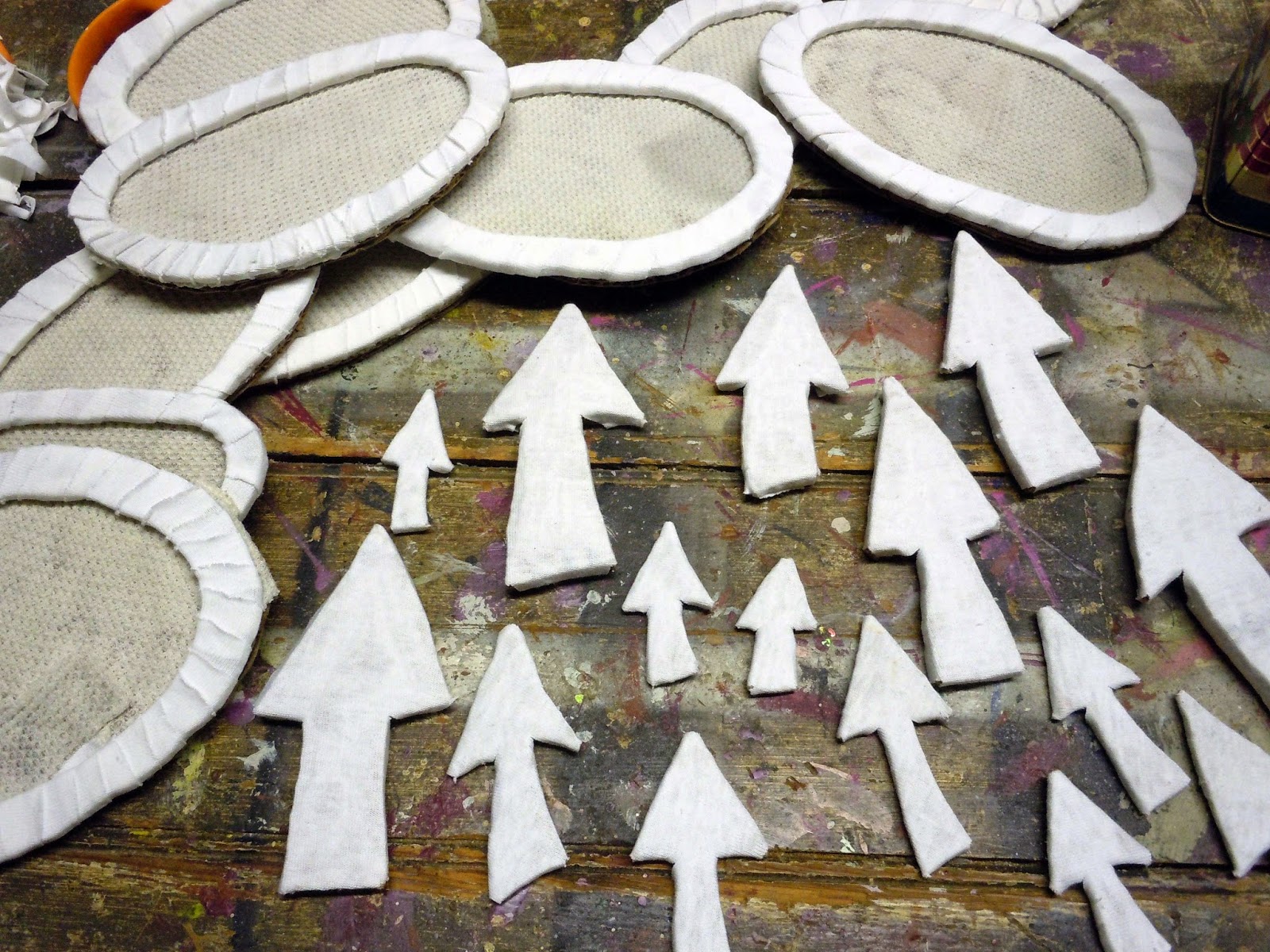 Next time we'll take a peek at a few other studio projects.
Posted by Steve Banks at 7:10 PM