So far I'm calling this 'piece' Countdown.  I'm not sure if that title is going to stick, but for today anyway, it's called Countdown.  I am creating it for Pop Culture Palimpsest this coming Summer at the Figge Art Museum.

These are the really early stages of making the piece.  Basically, I know I want a rocket with USA on the side and a circular window with a face peering out.  That's my starting point. 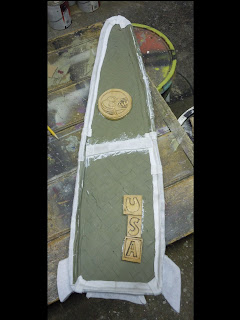 I carved two potential faces for the rocket.  This one is the 'winner'. 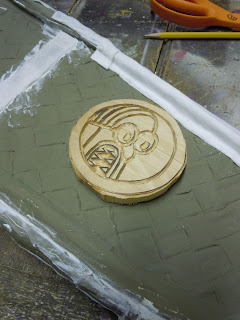 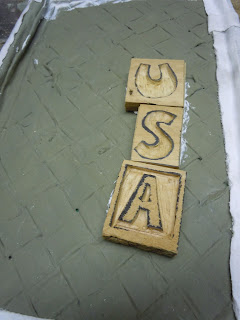 This face may end up being a Cosmonaut (I prefer the Kosmonaut spelling) on this composition, or just end up in something entirely different some point in the future. 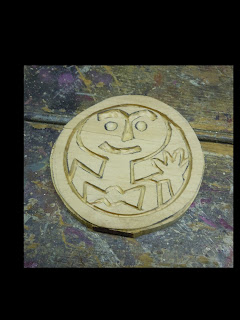 In addition to the rocket, I think I want some kind of launching pad.  I have some currently-undesignated carved scraps laying around that just might fit the bill.  Since I wanted the rocket on the far left of the composition, I have to modify the carved scrap pieces to accommodate that configuration. 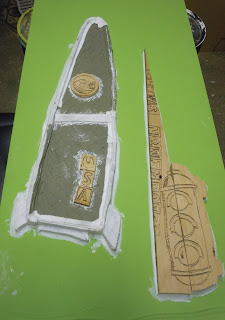 I attach everything to a smaller (but currently stretched and primed canvas) to lock everything into position.  Once I flesh out the idea in my head some more, I will cut loose what I need and attach it to a different surface.  Right now, things need to be primed, and even though it seems like a wasteful extra step (attaching components to a canvas that I know I won't keep), it allows me to get raw surfaces primed (and dry) and to stare at what I have and figure out what I want to do with it.  Basically, it's a 3-dimensional sketch. 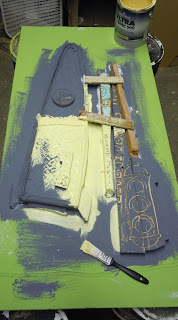 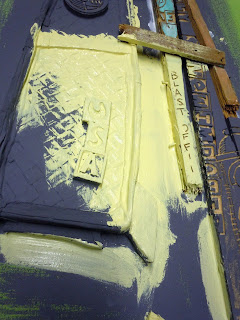 A few weeks later, I stretch a larger canvas and cut free the rocket and launching pad.  I know they will be located to the far left of the piece.  Now I need to figure out what will take place in the rest of the composition.  I test out all kinds of options (including Punchy) to see what catches my attention and sparks an idea.  Punchy, by the way, was a no-go. 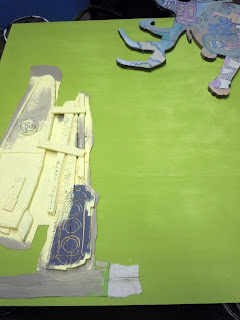 I have all kinds of scrap materials lying about the studio for exactly this purpose.  The rectangle with the series of cut-out ovals is actually now part of a different piece.  It didn't work here, but it does work quite well in its new home (more on that in a future post). 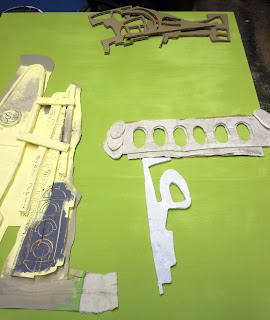 Testing out another little sumthin' sumthin'. 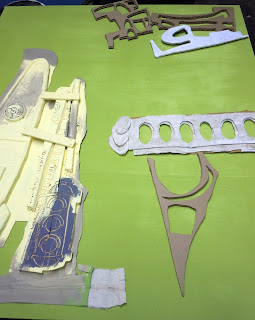 One of the things I tested out was a remnant I had attached to canvas that was in a back corner  leaning up against a wall in my studio.  It was something I was working on prior to 2010.  With the hope of working on it some more, I brought it with me to Northwest Missouri State University in 2010 (where I taught sculpture for a year).  I forgot it in a back corner of that office when I moved back to the QCA at the end of the school year.

When I returned to Northwest Missouri State University to teach sculpture again (this time for the 2015-2016 year), artist/sculptor/profoundly nice guy, Glenn Williams had left it untouched in the back corner of the office.  The second time around I didn't forget to take it.  That being said, prior to placing it within this composition, I had no idea what I was going to do with it.  It took at least 9 years for it to find a home. 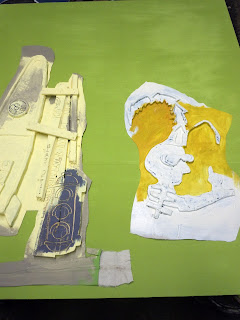 Things are starting to take shape. 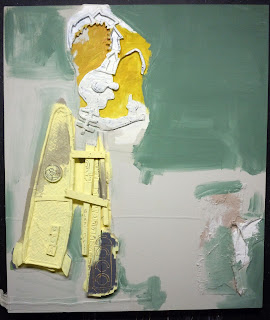 I added a little bit of a 'structure' on the right hand to help visually balance out the launching pad. 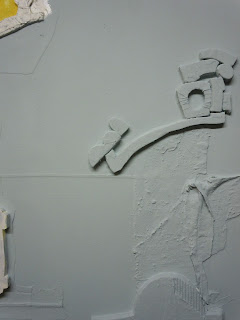 Here's how it looks with everything brought together on one canvas, just prior to its last layer of priming. 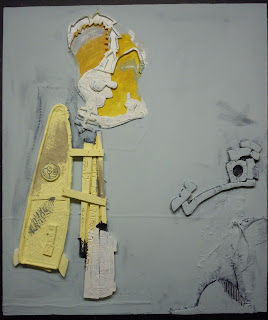 Now with a little rust added in select areas. 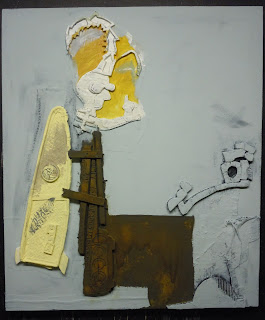 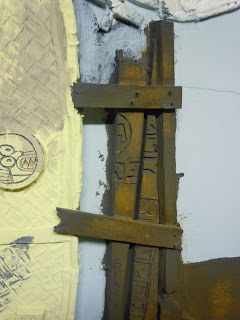 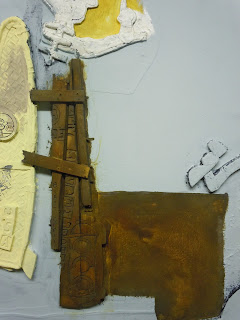 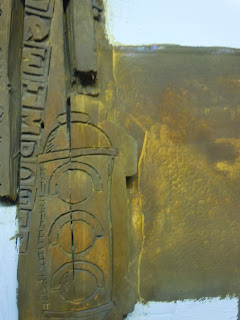 Once I have achieved my desired level of rust, it's time to lay down the base layer of colors. 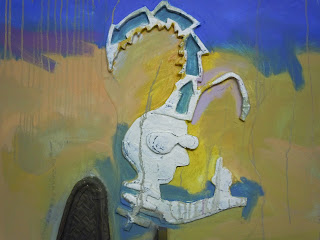 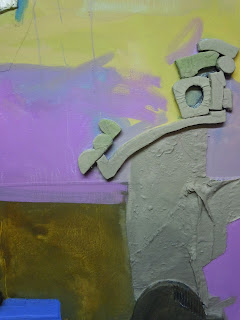 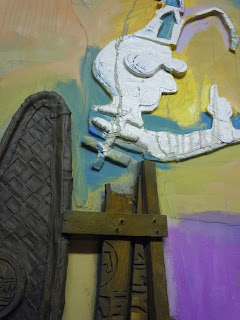 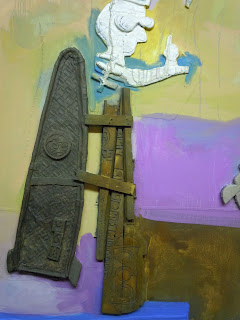 This is how it looks with everything in place and the base layer of colors laid down. 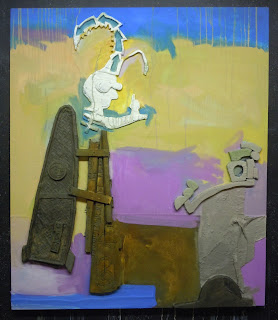 I'm gonna let this bad boy dry for the better part of a week before I even start considering painting any kind of lines on it.
Posted by Steve Banks at 9:04 PM