Evolution of Pieces. Part I.  Although much of my work comes about through the layering of images and objects, very little of it is planned out.  This allows me to capitalize on any kind of spontaneity that may arise, and usually, my 'plans' aren't that stunning to begin with.  If I have a plan that I slavishly stick to, the resulting piece is almost always a disaster (an optimist would see that as just another layer waiting to be obscured...).

Back in 2000, I was the Night Auditor at a motel down in Texas.  I had about 3 hours of work sandwiched into an 8 hours shift.  So, although I was stuck at the front desk baby-sitting the hotel, the paranoid druggies, the loquacious insomniacs, the weary travelers, and the not-so-subtle adulterers, I had plenty of free time to doodle.  The overwhelming majority of these drawings were outright crap.  But, if 'misery loves company', then crap 'really, really loves company' (I know, not quite as eloquent).  I found that when I combined these bad drawings/doodles into larger compositions, they took on a life of their own.  Their crappiness wasn't so much of a limitation, as it was an intriguing conceptual point-of-entry into the artwork.

Here are a few examples of pieces that are comprised of multiple layers of images and/or objects.  Frequently, as is the case for Domain, a piece may have had several 'lives' over the years and even been shown in one, or even several incarnations at various shows. 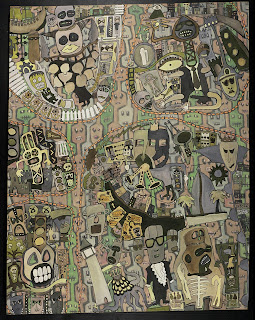 This is the third layer for Domain (image layer, obscuring layer, and then another image layer).  The base layer (the interlocking green and brown faces/masks) is one of my 'beta-type' layers.  I will explain more of the ideas behind that in a future blog when I have a better image of what the 'beta-type' part looks like.  The beta-type layer was painted back in 2001 or 2002.

The next layer with all of the little figures, masks, and symbols was laid down in 2006.  Some of the images (masks in particular) are from drawings I made of some of my now destroyed/defunct masks and figures.  Each area (or domain) is protected by its own dotted line force field.  The sameness in the size of the figures (or the lack of dominant figures) coupled with the drab color scheme pretty much insured that this would not be the final layer for Domain. 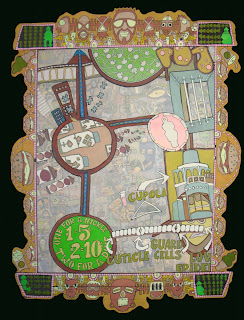 Domain sat in the corner of my studio for nearly two years before I was excited enough about an idea for the next layer to be applied.  I didn't want to massively ramp-up the color palette -nor the contrast, but just tweak it enough so it wasn't as bland as the first two levels.

Although this image shows Domain with a carved frame, it existed for nearly two years without one.  Since the carved frames are very time consuming and the process of making them is pretty much a one-way trip (it is hard to 'uncarve' wood), I usually commit to making one of those once I am fairly satisfied the painting is 'done'. 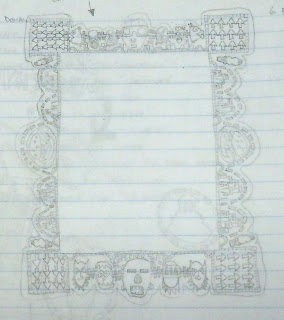 I usually kick around a few sketches for each frame.  Picking, choosing, adding, deleting and, rearranging various ideas, motifs, objects, images and characters, until I get something that is A) interesting to look at, B) interesting to carve (carving is a pretty mind-numbing endeavor to begin with and carving something boring makes it nearly excruciating) C) and either adds to what is going on in the piece, or acts as a counter-point to what is happening.

This is not a great image from my sketch book (which is just a spiral notebook, not your typical hard-bound, archival paper, 'nice' artist sketch book), but it gives you and idea of a prep sketch for a frame.  Note: I took some aspects of the images/masks/characters from the partially obscured second layer of the painting, and reintroduced them on the frame. 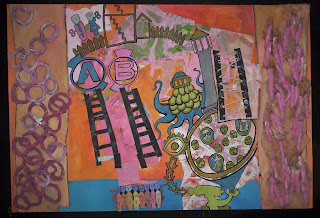 This is an earlier incarnation of what ultimately became Dialog: Hot Dog Variation.  This piece was called eee-KWAY-shun and was shown at my Funky Aftertaste show at the Morissey Gallery at Saint Ambrose University here in Davenport.  Before this piece was converted into its current existence, several elements were removed from the canvas and are either 'waiting' to be reused (as is the case for the dangling 'french fries' and 'onion rings') or have already found a new home (as in the life raft (lower center) which is now part of a piece called Nursery Rhyme). 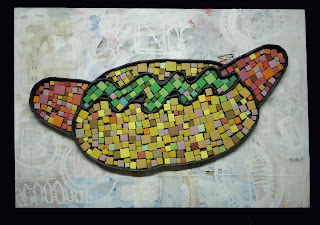 A couple years later I added the Hot Dog (the 3rd in the 'Dialog Series') relief image to the canvas formerly known as eee-KWAY-shun (you can still see some parts peek through). 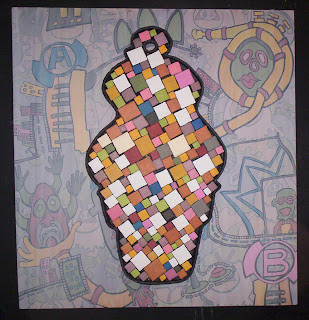 This is an earlier version of Dialog: Dipped Cone Variation (also part of the Funky Aftertaste show in 2008). 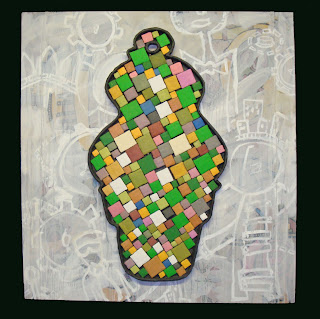 Within a year, I began to expand from not only 'hazing-out' the underlying layers, but to more aggressively painting them out.  So by 2009, I had reworked the color scheme of the 'dialog squares' and also changed how I approached painting the 'image layers'.  The dipped cone was my first in the Dialog Series -I hadn't yet decided to switch from the silhouette to compartmentalizing the sections within the Pop culture 'Goodie'.
Posted by Steve Banks at 12:38 AM