Surfacing at the Next II Gallery in New Orleans.  Back in 2004 my friend, former mentor, and fellow artist Karen Blomme, and her husband Ross Haecker moved to New Orleans so Karen could work on her Masters Degree (MFA). I helped them with their move.  The relocating process was a conga line of misadventure piled upon misadventure.  Karen ultimately got her MFA (after relocating back to Iowa and finishing her degree at the University of Iowa).  During this time she had a show at The Peanut Gallery of her work born out of this chaos.  Here is a link to a review that I wrote about that show for The River Cities' Reader (and a quick description of the turmoil throughout that time period) http://www.rcreader.com/art/chaos-leads-to-simplicity-karen/.

While down in New Orleans, Karen and Ross opened up the Next II Gallery (since it was 'next to' the St. Roch Seafood market (their 99 cent stuffed crabs made me very happy)).  They had rented a house that had a large space attached to it (imagine a neighborhood grocery store on the front side of a two-story house and you'd be pretty close to envisioning this place).  They turned that large space into a studio/gallery space.  Another 'thing' about their gallery was that it was located in a bad neighborhood http://www.cbsnews.com/2100-18560_162-20057964.html?pageNum=3&tag=contentMain;contentBody.  (read the brief part about St. Roch on page 3). It was the kind of bad where they couldn't get pizza delivery after dark.

Don't get me wrong, the neighborhood also had alot of charm, it was close walking distance to the French Quarter, near great music, and also Popeye's Chicken (and their mashed potatoes.....).

During Mardi Gras of 2005 I had a solo show at the Next II Gallery called Surfacing.  It was a collection of recent work that I hauled down there in a rented truck which fortunately only crapped out once I got within city limits (it could no longer go faster than 35 miles per hour).

Here are some pictures from the show.

This is Peter Nu and Rajah who performed during the 'sparsely' attended opening (apparently it wasn't only the pizza delivery guys who avoided the neighborhood after dark).  Behind them you can see a good example of one of my Beta-Type motifs that periodically shows up in one of my painted constructions.  The general idea behind the interlocking heads is that along the 'spectrum of personality types' there are the 'Alpha' types who are positive, inquisitive, and are for or about things, ideas, people, places, music, etc.  At the other end of the spectrum, are the 'Beta' types.  They don't define themselves by their likes and passions, instead they let themselves be defined by other things.  Visually, what that boils down to is the heads are defined by the other heads around them (almost like an undulating brick wall motif). 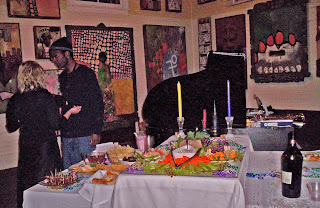 This is the impressive spread for the opening and Karen talking with Rajah.  At least 6 of the pieces you can see in this image didn't survive Hurricane Katrina.

I am taking a quick break from installing the show.  I had obviously saved the world from a full-on 'Cheeseburger Assault' not too long ago.  No need to thank me America, I was just doing my job...

And here are Dr. Becci Noren, Fitz (the guy who whipped up the food for the opening), and Claudia.

I haven't had the ability to show these next images before, and they are actually the reason why I put in this little nugget of history on Punching Holes In The Rah-Rah.  Here is some of my work floating around in the gallery after the levees broke. 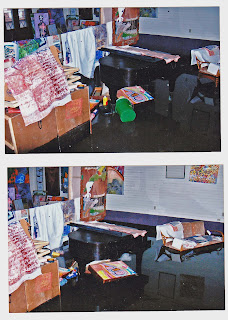 Later that Fall (a few months after Katrina) we went back down to New Orleans to salvage what we could from the flood.  I lost a little over 18K worth of artwork.  I can't even begin to describe all that Karen and Ross lost.  I did create a painted construction called An Evening at Smitty's to chronicle our post-flood salvage trip back to New Orleans.