Studio Work/Antiquing.  A while back Terry Rathje introduced me to 'antiquing' metallic surfacers.  Not to make this a product endorsement or anything, but the stuff he showed me is called Sophisticated Finishes and you can get them at Triangle Coatings (tricoatstore) http://www.tricoatstore.com/home.php?cat=251.  I have been fantastically happy with the results I have had.  Check it out.

This first set of images is the copper patina I put on a mask panel that I made (you can see it on my first Merican-Tastic! entry on the Cool Fools Dool Gools 4 Jools piece). 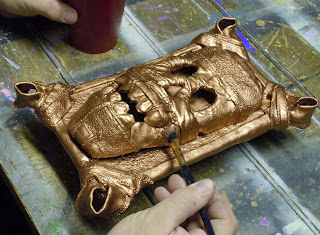 The mask itself was constructed from cardboard, fabric, and Spackle.  I primed it with several coats of paint so I could seal up the fabric base material.  Once it was completely dry, I added two coats of the copper base (Copper Metallic Surfacer). 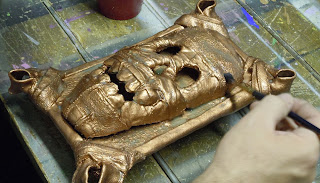 While the second coat of the copper was still barely moist to the touch, I applied the antiquing solution.  You can already begin to see a patina forming on the 'mask'. 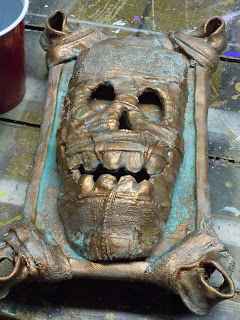 After the antiquing solution has a while to hang out on the surface, you get closer to this kind of look for your piece.  I like the overall look, and I am in the process of constructing 'narrative panels' for other pieces that will have a similar surface treatment.

Another one of the surfacers I've used is their Iron Metallic Surfacer.  I applied it to the 'Pharaoh' piece for my upcoming Merican-Tastic! show (It is going to be one of the not-optional pieces I am giving to Heidi Hernandez to work on). 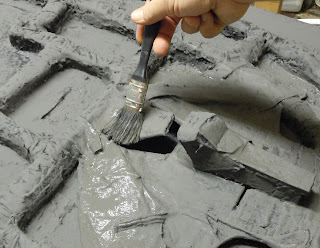 This is the second coat of the Iron Metallic Surfacer being applied to the sarcophagus 'lid' fragment.  Much like the copper skull above, I primed this with several coats of paint first so the comparatively expensive surfacer doesn't get absorbed by the unsealed fabric (and in this case, cement as well). 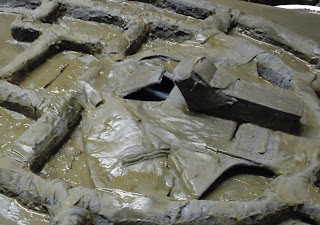 Unlike the copper surfacer, you are supposed to wait until the iron surfacer is dry before you hit it with the antiquing solution.  You should wait roughly 24 hours between each application of antiquing solution (it's kinda cool to watch the piece change over the course of the day as the iron in the paint starts to rust).  The image above is what it looks like immediately after I applied the first coat. 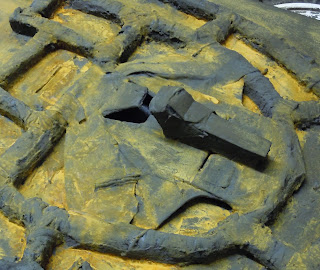 Two coats of antiquing solution (and 48 hours) later, and POW! you have a rusty sarcophagus lid! 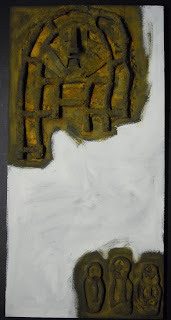 This gives you an idea of what I am passing off to Heidi to work on.  The canvas is 3 feet wide and 6 feet tall.  I am in the process of making a carved frame for this piece as well (which will increase the overall dimensions to roughly 52" x 88").  In some upcoming posts I will show several different carved frames as they move from sketches on paper, to layouts on wood, to the actual carving stage, and then painting. 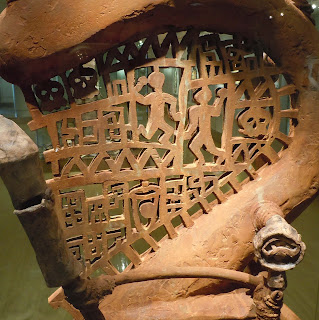 Finally, for my Artifice, Artifact, and Allegory show, I used the Iron Metallic Surfacer to give Trojan Horse its rusted look.
Posted by Steve Banks at 11:22 PM