Holy Smokes!!  There's roughly 9 weeks until the 'Teaser/Promotional Show' for 'Merican-Tastic!' opens and another 4 weeks beyond that before 'Merican-Tastic!' proper opens.  The last few weeks have been quite a roller coaster both inside and outside of the studio.  Imagine a situation where a growling chainsaw above your head is the least of your worries........

Anyway, less talk more pictures.  Here are a few updates on pieces I have already discussed along with a few images of previously unmentioned works.

This week is pretty much a painting week with some knock-down drag-out carving taking place this weekend. The original image on this canvas dates back to 1998.  The crenelation was added a year later.  The wood block lettering and the base paint job were added last week.

The following images are close ups of some of the line work on Squishy Rumba.  Some of the collage elements come from some billboard material I rescued along the railroad down in Texas.  You can see some Ben-Day dots best on the center image (my under-caffeinated hands were a wee bit shaky on the first and third images). 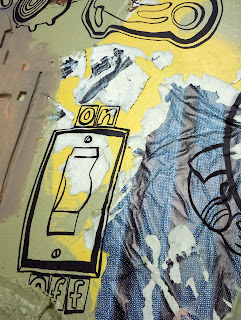 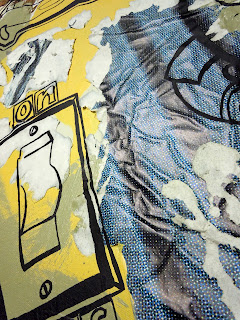 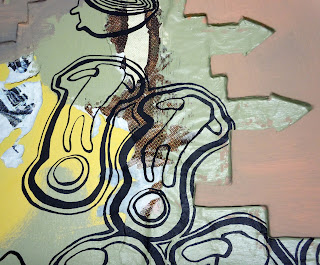 The first layer of line work of Squishy Rumba: 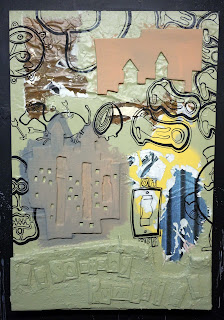 Another work in progress is BroKin (that may just be the working title, I'm not sure yet).  A portion of this piece (the cemented part) is nearly 9 years old and was begging to be reworked -who am I to deny an insolent piece of work its proper smiting?  The image below is pretty rough.  I used a drywall saw to cut out the areas for the unprimed wooden letter blocks and the crown form.  I had some fabric seams to hide with an old gallon of paint that was mixed with sand.  The can actually hissed when I opened it.  I'll let you fill-in the 'olfactory blanks' on your own as far as what kind of smell belched out of the hissing can.... 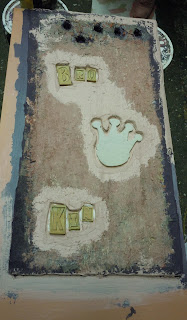 BroKin with the start of some line work.  There will probably be at least two layers for the completed piece. 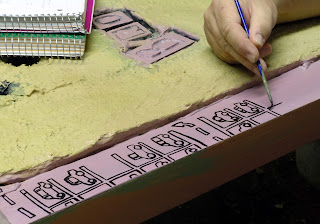 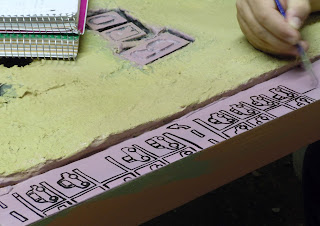 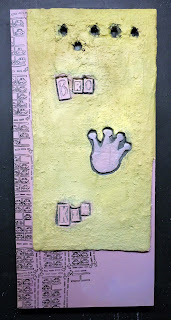 A quick sneak peek at High Noon on the Streets of Reason.  I will talk about this one in a later post. 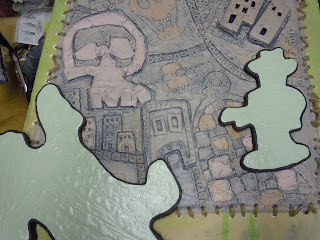 Here are some glimpses at the new line work on Swan Dive Bomber (and some close-ups of the collage elements). 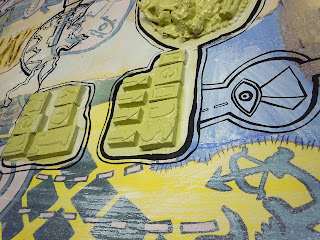 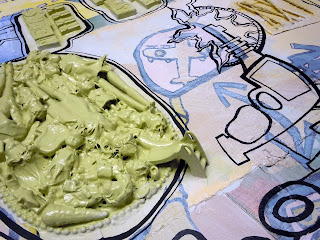 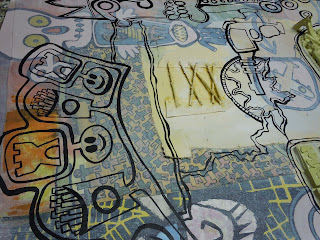 I have actually laid down some color on Swan Dive Bomber since I shot these images, but it will be a few weeks before it will be 'presentable'. 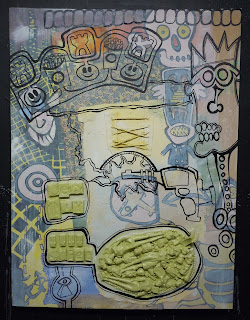 I have also begun inking the frame! 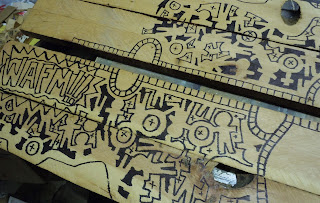 And finally a quick peek at Unheld Untouched Undone: 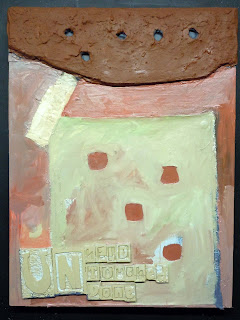 I just laid down the line work this afternoon.  There will be more, but I hit that point when I knew that I was on the verge of messing up was going on (unfortunately not in that cool-learning-something-new-undiscovered-territory kind of messing up, but more akin to overworking/overstating something that needs to be put forth with minimal insistence), so I will let this one sit for a day or two. 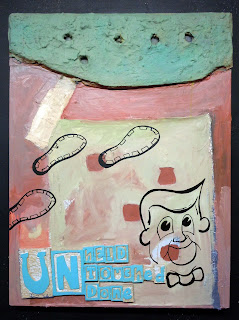 Here it is with a few colors changed and some minimal line work.