Although both Terry Rathje and I live and work near a river, the environments are quite different.  In short, he gets to soak in all of the goodness of nature, I get make sure I don't accidentally step in random street vomit.  However, my space has a few perks of its own.....

My studio is steam heated which means it is usually hotter in there during the Winter months than it is in the Summer.  This is just a shot of an old photo thermometer from a generic day this past Winter in the studio.  I absolutely love being able to go somewhere that is thoroughly warm during the bitter cold months of Winter. Shorts in January! 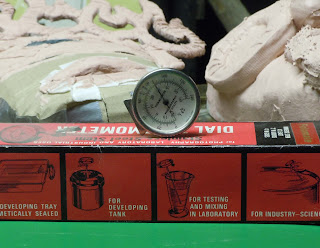 I also have some pretty spectacular dining establishments in the same building.  I am next door to Boozies -home of 'The Boozie Burger' and some tasty chicken quesadillas!  Behold the majesty of the Boozie Burger! 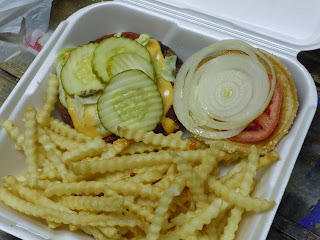 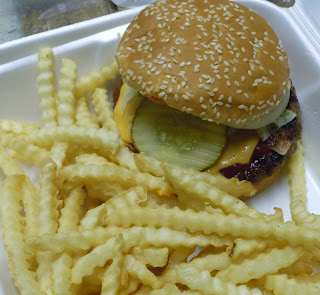 Also fantastically close is Antonella's -a great Italian joint that makes an amazing Chicken Marsala.  I will feature the Giovani's Creamy Garlic Pizza in another post (prepare yourself....) 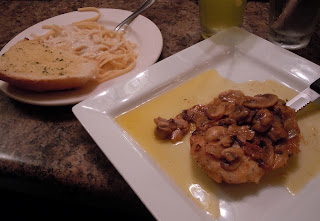 A newcomer to the scene is DaVinci's Cafe and Cocktails.  They are on my 'to do' list of places to eat, but I have already heard glowing reviews of their food and I always get a chuckle when I am working in the studio at night and hear their patrons facetiously cheer on the lugnuts who rev their engines when they drive by.  Look for some images of DaVinci's food in an upcoming post.

There are actually several restaurants within a 3 block radius from my studio.  These three also happen to about a five second walk from the door to my studio.

I would be remiss if I didn't show you the view of the Mississippi River just a few blocks away.  Don't get me wrong, sometimes the moths and the shad flies are nearly unbearable, but the beauty of the river is hard to deny. 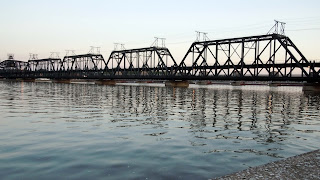 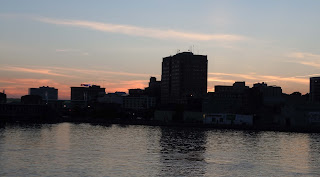 This is the often maligned 'Sky Bridge'.  Let us just enjoy some of its aesthetic qualities, shall we? 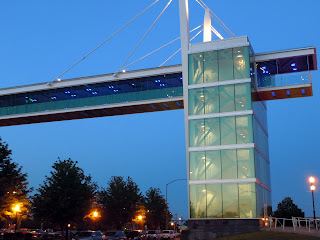 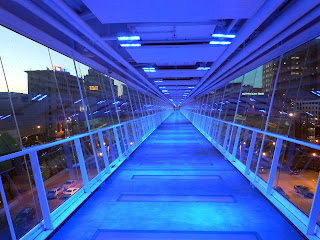 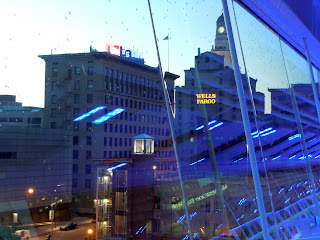 A couple shots to give you a sense of walking around some of the buildings at twilight. 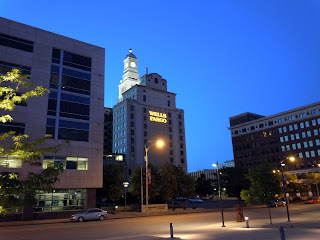 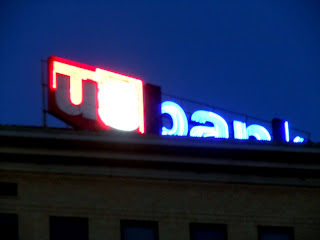 Below is a group performing at Mojo's Cafe at the River Music Experience (RME).  You can check out the RME at their website: http://rivermusicexperience.org/Home.aspx .  I should also mention the head honcho at the RME is an unassailably cool guy named Tom Swanson.  Here is a link to his band (which you should check out) Jim the Mule: http://www.jimthemule.com/ AND also a quick shout out to the fantastic Ellis Kell (the Director of Programming and Community Outreach).  Here is a link to The Ellis Kell Band MySpace page where you can check out some of his music: http://www.myspace.com/theelliskellband. 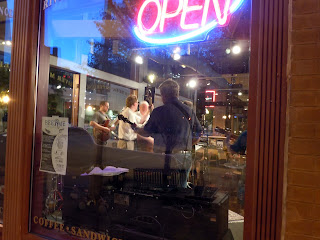 The River Music Experience is just a block away from my studio and just half a block from the Figge Art Museum. 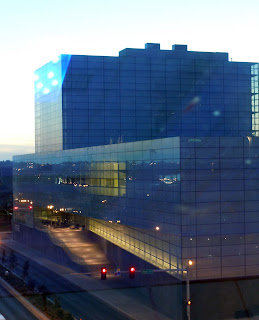 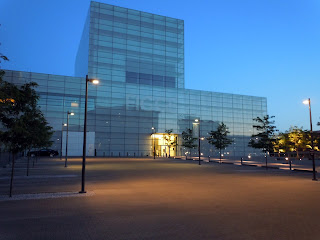 Here is a link to their website:http://www.figgeartmuseum.org/Home.aspx.  I couldn't resist a shot of the 'big ole' Sol Lewitt in the courtyard in front of the museum with a couple of images of a crescent moon and Venus over the parking garage. 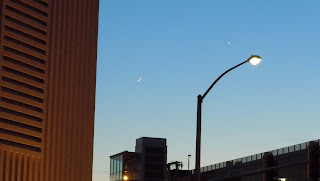 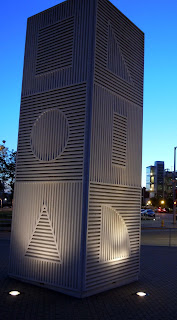 The downtown has a whole different character in the Winter. 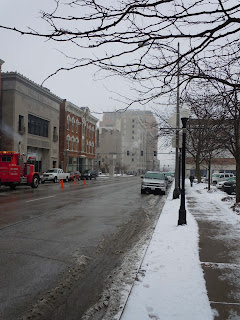 We also have a couple voracious truck-eating bridges, so if for some reason you want to drive your big rig to downtown Davenport and snag a Chicken Marsala at Antonella's, be mindful of the low clearance! 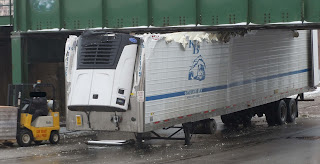 It is interesting to see that how our individual studio spaces affect Terry's and my studio work.  Given that difference -which is at least in part influenced by the personality of our studios and environs, I was amazed how well Terry and my structures/projects/installations worked together at a show we had back in 2011, called ELEMENTAL (at MidCoast Gallery West).  Here are a couple of images Terry shot and Photoshopped with some sort of panoramic magic to fuse several images together. 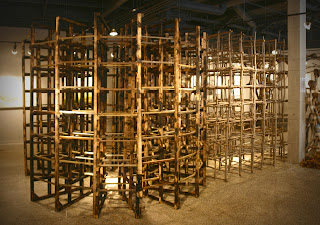 I will discuss ELEMENTAL in greater detail in a future post.  ELEMENTAL featured the works of Matt Pulford, Emily Christenson, Terry Rathje, and me.

We'll close with a few new shots of the studio itself. 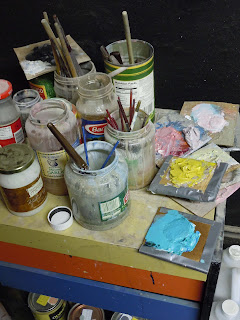 Above is the standard dirty palette/clutter shot to demonstrate my level of 'seriousness'.  However, if you look closely, my palettes are simply folded slabs of cardboard versus some sort of 'official' palette.  The rest of these are just quick shots that show the level mayhem that is erupting as I prepare for Merican-Tastic! 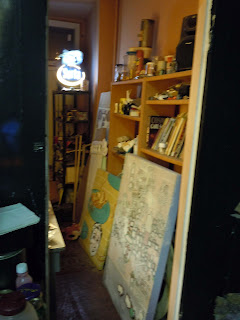 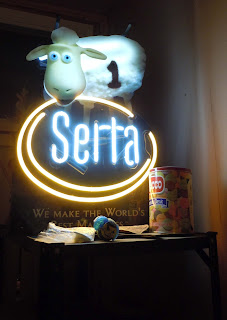 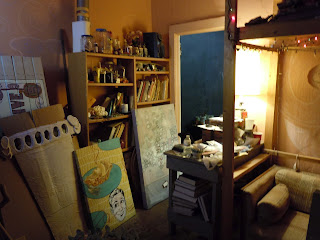 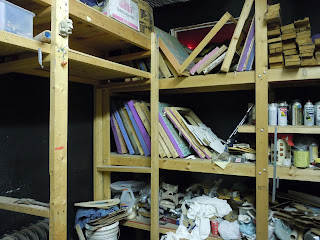 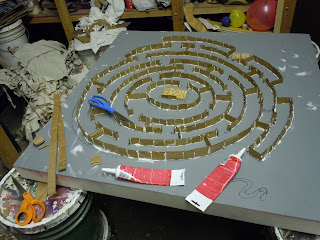 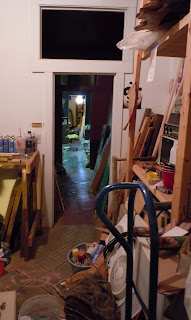 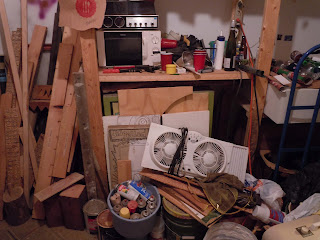 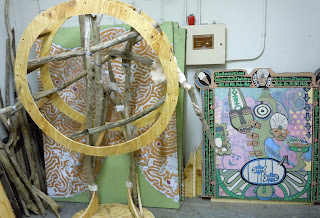 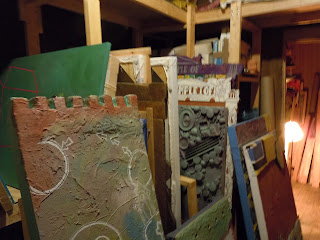 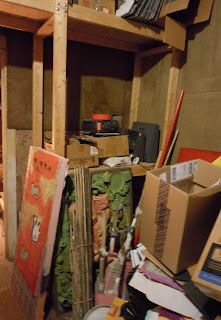 There will be other studio visits to some of my artist friends. Stay tuned!
Posted by Steve Banks at 11:49 PM