Carving Part IV and A Visitor To The Neighborhood

My painted constructions/works on canvas often times have overlapping layers of doodles/sketches/drawings.  None of these 'component drawings' are terribly compelling.  Yet, when they are juxtaposed, they form an intriguing loose and scattered narrative.  Sometimes I take some of these 'component drawings' and make a carving out of them.  So is the case with Dispelled. 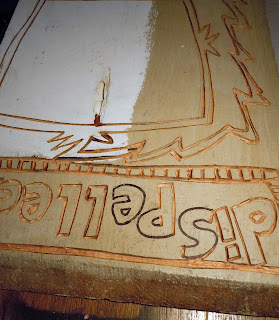 You can see some of my marker notations to remind me NOT to carve the lines cutting across the rabbit's ears.  Although I routinely forget to cut a line here and there, I have so far, not cut too much.  When it becomes more of a challenge is when I start a carving and then can't get back to it for a month or two and then try to decipher my two-month old notations/thinking.  I had a good reason for putting that information there two months ago, but can I still remember the reason? 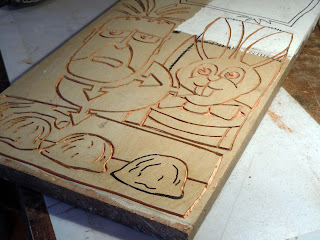 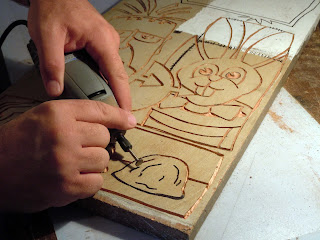 After everything is carved, it is time to spray paint the whole piece black.  Once that is dry, then I put on a layer of white so I can see what I am working on AND because oil paint, when applied thinly, is translucent the white helps reflect light/make the colors more vibrant. 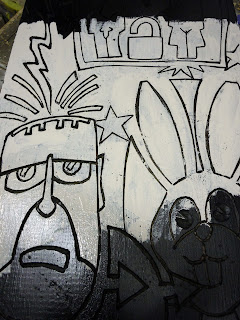 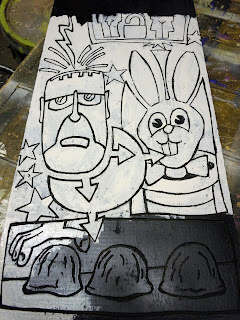 For Dispelled, I didn't have a specific color scheme in mind, so I just cut open some older paint palettes and dug out a green and a blue.

Seeing that particular green and that particular blue together made me realize that I wanted them to be more vibrant/active.  The image above is what the piece actually looked like in progress, and the image below is when I used Photoshop to just pour in a blue and green combo I found worked better together.

It really does coat, soothe and relieve! -or is that some other product slogan?

With those three main colors interacting tolerably, I wanted to sneak in a few more not-so-visually-demanding colors  -gray and an obnoxious yellow (ok, so one of them wasn't so demanding...).  I'm not 100% sold on the result so far, but now that there are some colors in place, I can take some time looking at the piece and mentally try out some color tweaks/changes.  Who knows how long that will take?  This original plank of wood had a mostly different drawing on and was titled Transmitter (back in 2004).  Only the lightning bolt and the large head survive from that incarnation (the main reason being that they had already been carved). 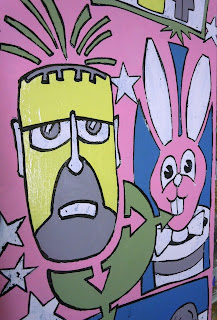 So I'll stare at it and contemplate for a while.....

Anyway, on to my next nugget.  In a few different posts, you can read about the joys of Antonella's Ristorante (check 'em out here!) which is directly below my studio.  I have sung praise to their Chicken Marsala and this bad-boy you see below Giovanni's Creamy Garlic (with a ladle of red sauce on top -ya gotta ask for it). 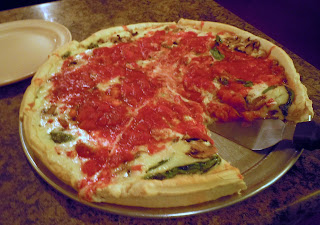 Anyway, awhile back when the Presidential Campaign was in high gear, and the battle ground states were getting the attention normally afforded to single women in the Wild West, President Obama popped in for a quick bite to eat at Antonella's.  I have to admit that I am disappointed in the Secret Service's efforts in scoping out an area.  Surely, if they had done their research, The President would have been enjoying a Giovanni's Creamy Garlic Pizza. 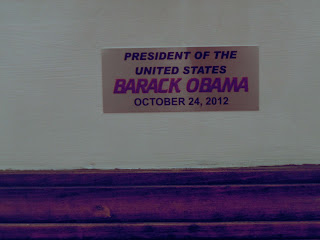 I'll let you guess which chair he sat in during his visit.... 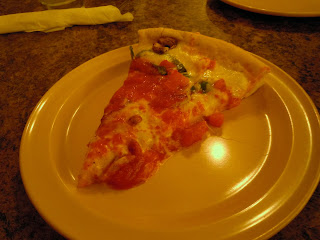 I'll close this post with a story.  A good friend of mine was flying into town at 10pm on the night before Thanksgiving.  She wanted to have supper at Antonella's (if at all possible) once she arrived.  I asked Giovanni if they would be open the night before Thanksgiving and he said they'd be open until 10pm.  I went into Antonella's at 9:45 and saw the servers vacuuming, rolling silverware, and getting ready to go home to be with their families.  It was obvious that they had a fairly slow evening and the servers were eager to dive into their holiday plans.

My friend didn't arrive until well after 10pm.  Not only did Giovanni make my favorite pizza (Giovanni's Creamy Garlic with a ladle of red sauce added) which, due to its thick crust, takes about 35-40 minutes to bake, he let the servers all go home and patiently waited with good cheer as the two of us enjoyed our pizza.  He shared several stories with us, including tales of the President's visit.  I couldn't thank him enough for his hospitality and generosity.

Living downtown is certainly a mixed bag of good and bad (random street vomit is pretty low on my list of sights to see), but having a place like Antonella's by my studio and people like the Sgros as neighbors makes it a pretty damn good neighborhood.