Back On The Case Part I: It's So Fantastical....

Sometimes I sporadically move a piece forward in the studio like a bored kid listlessly kicking a soccer ball in front of him as he mopes down the street.  This is at least partially the case with the piece I am working on right now.  For the time being, I am referring to it as: It's So Fantastical In Its Utter Banality since that is what the text blocks spell out.  As I get nearer to completion, I will spend some time formulating/riffing/devising a more concise moniker.

The piece as you see it here, is in the same state/condition/configuration as it was when I offered it to Heidi Hernandez last Spring to complete for Merican-Tastic! She chose to work on other pieces.  I did a few more sketches for this one, but it got put aside as other works began to demand more time and attention. 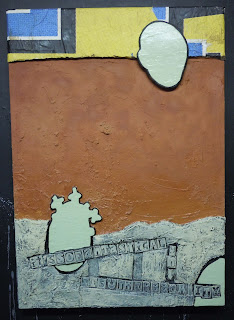 Recently, when I resumed working on it, I realized that a mask/face/character/headdress I started working on back in 2006 would make an excellent (and needed) addition to the composition.  I only had to lop-off the top 2/3 of the mask and do a little trimming of the edge to make it fit snugly. 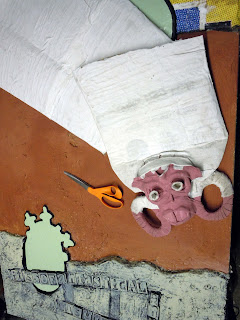 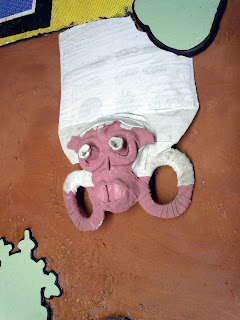 Once I made it physically fit, it was time to add texture/details to the headdress.  As a mental point of reference, the woven base and the raised parts took roughly 10 hours to construct, wrap with fabric, attach, and prime with two coats of paint (that does not include the time it took to construct the face initially). 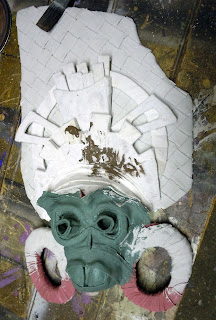 Attached and primed.  Since the headdress is now partially interrupting the triangle dialog between the pale green shapes (which eventually will become faces/heads) a new working title for the piece has been suggested: Interloper.  Catchier.  Shorter.  More possibilities. 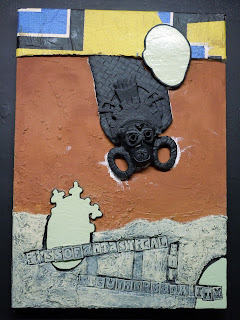 After I get a base layer of a dark color (preferably black, but others will work as well), it is time to apply the first layer of the Copper Metallic Surfacer as seen below.  Please note that the surfacing product does not require that I apply a dark color for a base.  I do that so if I miss painting a nook or a cranny somewhere with the copper and the patina, I have a harder-to-notice bit of black peeking out instead of a hot-pink Bat Signal barking for some attention (yeah, mixed metaphor, so what?). 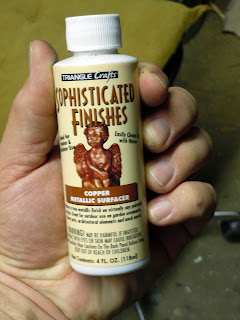 A few detail shots of the first coat of surfacer. 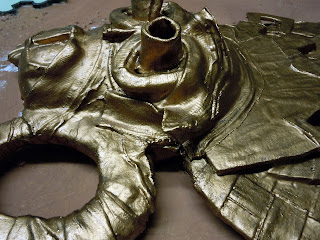 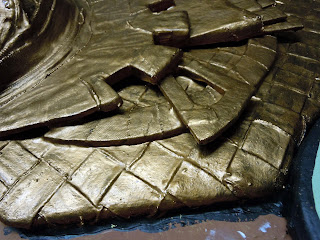 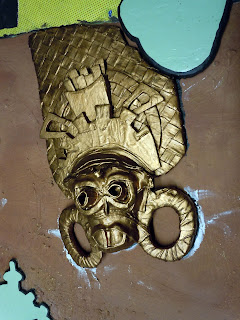 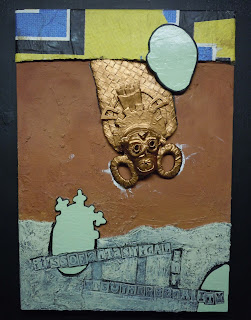 While the second coat of Copper Metallic Surfacer is still tacky, it is time to apply the patina coat. 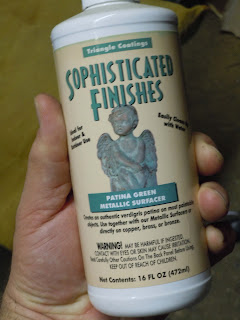 The top half of the mask towards the upper half of the image has had the patina applied, the bottom half has not yet had Patina Green Metallic Surfacer applied. 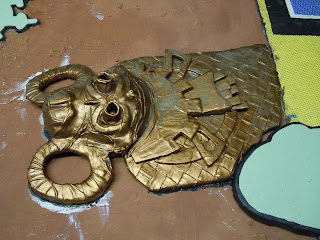 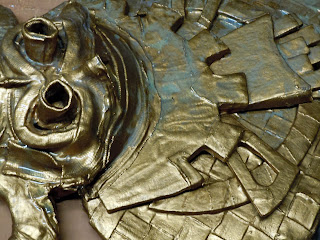 As soon as I applied all of the patina solution that I needed, I hung Interloper back up on the wall so the areas where the patina was 'pooling' could start to run/drip.  The next three images were shot immediately after I hung up the piece. 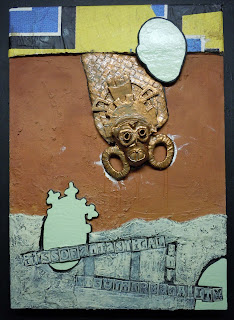 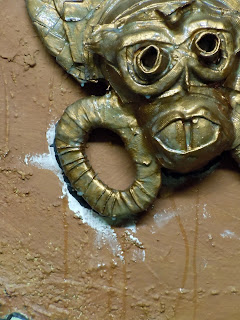 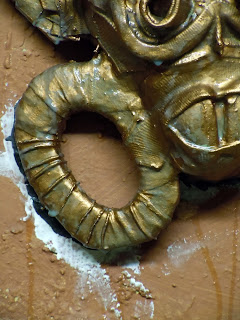 These next three images were shot 30 minutes later as the patina was starting to form. 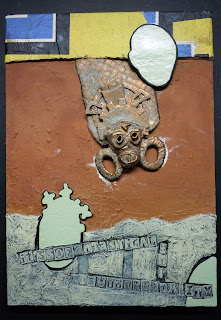 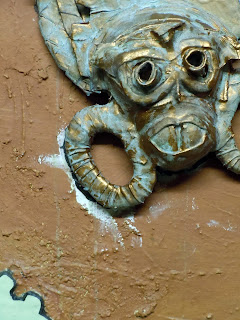 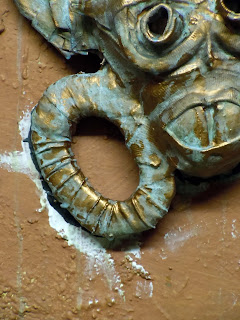 In the interest of making this a reasonably sized read, I will show its completion in a future post.  For now, we will close with a sneak peek at the top of the carved frame.

I know it's not much of a closer, but they can't all be Star Wars kitchen aprons now can they?