As much as I would love to believe that being an artist is all about the art (making artwork), that's obviously not the case.  Marketing and self-promotion are as important to being a studio artist as making excellent and intriguing artwork.  Reviews, 'buzz', foot-traffic, word-of-mouth reputation, are greatly facilitated by some kind of marketing/promotion.  For most artists, with the stereotypical artist's budget, that means 'self-marketing' and 'self-promotion'. 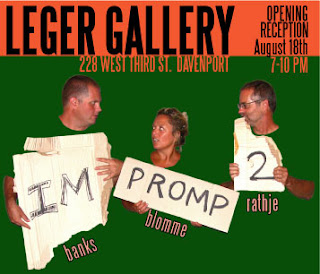 The following are just a few examples of different promotional images/posters/pdfs/whatever that I have sent out in the last few years to promote various shows I've been in.  The old saying about '...if a tree falls in the woods and no one hears it, does it make a sound?' applies to art shows as well.  If you have a show and no one sees it/writes about it/talks about it, what do you really have?  Art is about communication whether it be the interaction between the artist and materials, or the artwork and the viewer, -fundamentally a dialog must take place.

The show might only last 30-90 days.  The documentation (written, verbal, or photographic) lasts for years...

An arrangement of ceramic shards that existed just long enough to take a picture was what I used for my show Artifice, Artifact, and Allegory back in 2011.  Nothing fancy, I set up the pieces on the floor in my studio, put a desk lamp of to the side so the light would rake across the pieces to accentuate the texture, and then shot the picture.  A 10 minute process (well, realistically about 30 minutes....). 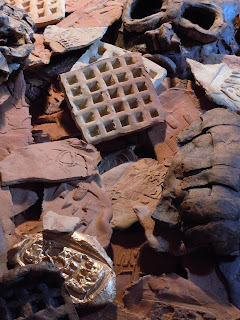 Some of the promotional images for a group show called PLAY were just created on my scanner.  PLAY featured the work of Susan Czechowski, Jillian Moore, Monica Correia, Terry Rathje, and me.

I scanned various toys, beads from Mardi Gras in New Orleans, and some magnetic letters (and removed the magnets first so they had no chance of messing up my scanner) to make the image.  I also included the Queen Grimhilde/The Hag figure that was part of the inspiration for my piece Tower of Janus (Older post regarding figures and relief sculptures).  Another toy in the mix was Gumby (top right corner of the image) 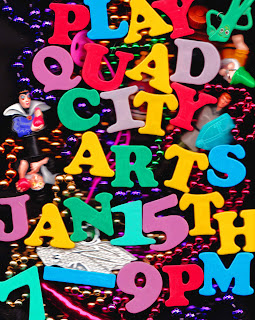 Terry Rathje ran with the Gumby idea from the scans to make this radically more informative poster for PLAY. 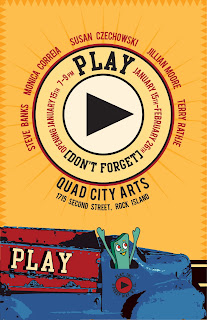 It was a sad coincidence that right before our show officially opened, Art Clokey, the creator of Gumby, died in his sleep (Wikipedia article on Art Clokey).

Speaking of Terry Rathje and his work making invitations, I would be remiss if I didn't show off probably his best effort in regards to impact, interest, and continuity.  For the show ELEMENTAL, featuring Emily Christenson, Matt Pulford, Terry Rathje, and me, we wanted a series of interrelated invitations that we could send out via e-mail every 3 or 4 days prior to the opening reception for the show.  The venue (MidCoast Gallery West in Rock Island) could also use the image(s) for their website and/or Facebook promotion. 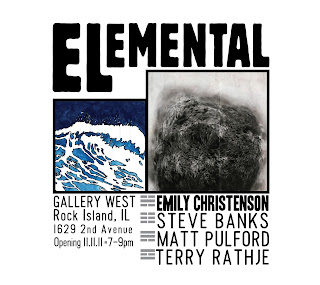 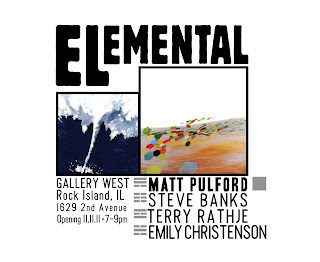 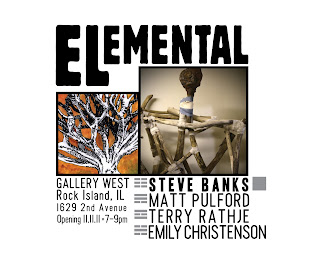 The fourth image/invitation went out early during the week of the opening reception. 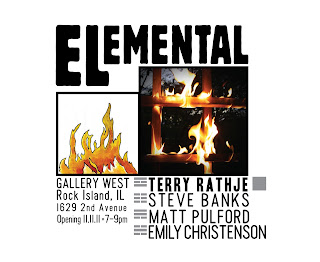 This one (the fifth image) not only went out 48 hours before the show, but also was used for a print advertisement in The River Cities' Reader (the free local arts, music, theater, business, and politics newspaper http://www.rcreader.com/ ) which we partnered with for the opening reception since they were celebrating their 18th year in print and wanted a venue where something fun/cool/cultural was happening that evening*. 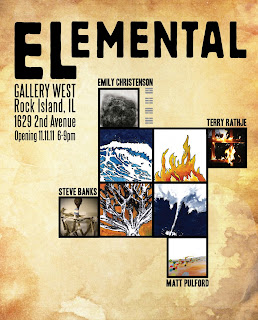 *An important side anecdote: The Publisher of The River Cities' Reader (and fellow artist) Todd McGreevy contacted me about partnering our two events on the same night at the same venue a little over two weeks before the opening reception.  He said what got him thinking about us/our opening/show were the invites.  He told me that if it had just been one invite, he might not have paid much attention to it.  By the third one, he was intrigued, informed, and ready to act.

Although I heard a few grumbles about bombarding friend's inboxes, our turnout would have been paltry without the promotional work.

A trio of images from the opening reception of ELEMENTAL 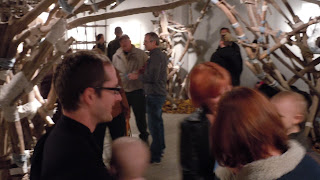 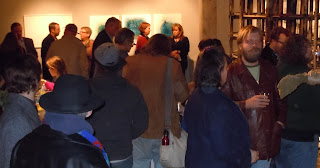 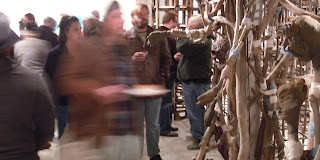 The show was up for two months and during the run of the show, there was an event in The District of Rock Island (The District website) called Gallery Hop!  We had another opening reception (a midway reception?) on the night of Gallery Hop.  This is how Terry modified the show announcement/invitation to keep it new and fresh, yet consistent with what we had put out before. 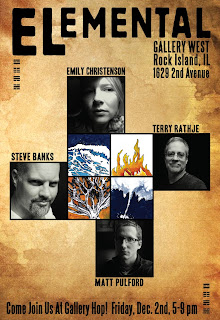 This past Summer, I pressed Terry into design service for the show invitations for Merican-Tastic!  The challenge for this show was that we were staring down the barrel of 3 different receptions.  So we needed thematically cohesive promotional images, but different enough that we weren't sending out the same old thing for each reception. 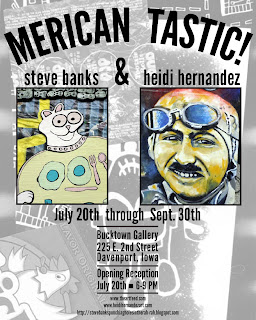 The color images are taken from artwork in the show (more or less -more with Heidi, and less with me). 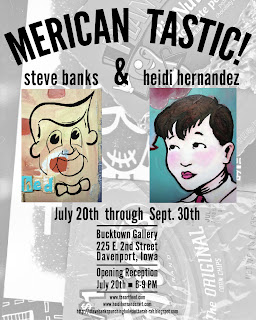 The backgrounds were a series of scanned collages on my trusty $40 scanner/printer.  I took out the color and subdued the contrast before I e-mailed them to Terry to slap down a little text. 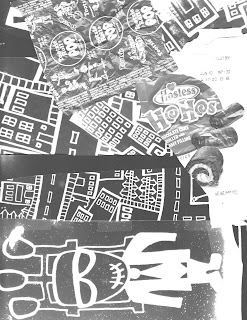 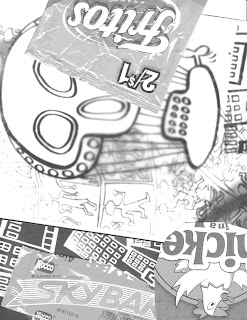 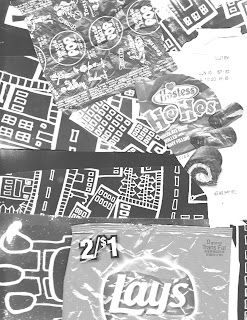 I wanted the background images to be related to some of what was going on in the show, but not detract from the text/information of the invitation.  All of these scans are a combination of snack food wrappers and old photograms of mine. 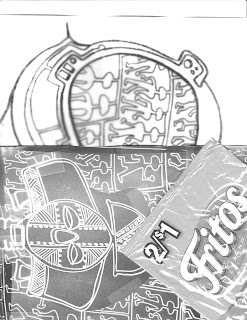 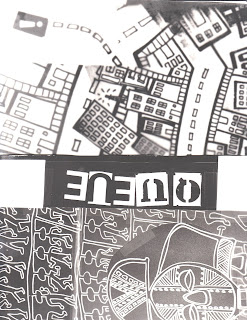 The images for the third invite.... 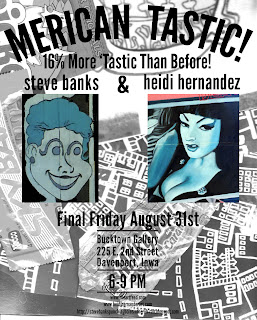 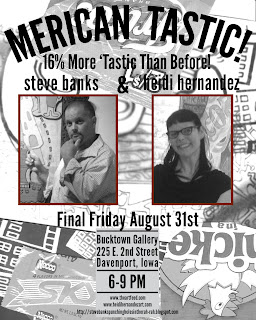 As an added bonus, the next few images are from a show that a friend of mine recently put on, and I felt the marketing images/ideas were too cool not to show.....

Sarah Robb did a fantastic job coming up with different, yet interrelated, images for her two-part poster to promote Candy Land (See earlier post regarding Candy Land ) back in December.  She had two separate openings that targeted two different demographics, yet the shows were basically one event.  Here is the poster for Kid's Night...... 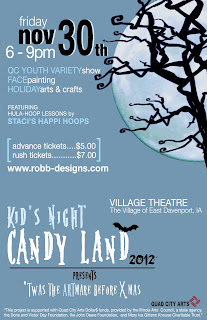 ...and here is the one for Adult Night. 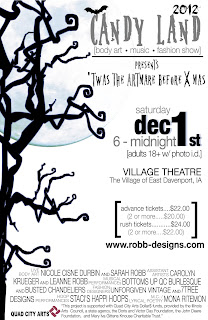 What impressed me was how well the two posters functioned side-by-side to convey the message that there were two separate events that were rooted in the same idea.  Kudos Sarah! 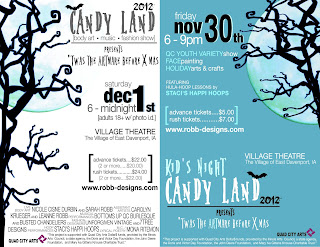 So we close with a peek at one of the ingredients for the promotional effort for Merican-Tastic! II: The Son of Tastic (coming in August to Quad City Arts).  I will share more once I do some Dremel work grinding off plastic fins and burs. 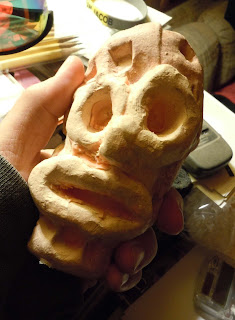