Two More For The Cause.

In addition to Glitter Heart, I wanted to start two other pieces so Terry Rathje and Heidi Hernandez can have some choices as far as which pieces they are interested in completing when we exchange works.  They are No-Tay-Shun, and Slo-ganizer.  They are a loose series that are connected by the pairing of a mask/face element, a rectangular format, and some form of text fragment.

I want to get each piece started far enough that I provide a direction (and some continuity) to the pieces.  However, I want to leave enough of the creative process open to whoever finishes the piece that they can really explore their ideas and possibilities (as influenced by me versus dictated by me).

So I am basically playing around with the initial layout/composition of the mask/face element and the text and leaving it basically at that.

Here are a few examples of what happens to the composition when I just move the text blocks around.

Although this next arrangement intrigued me, I rejected it because the central placement of the 'No' and 'Tay', would be too dominate of an element to the final piece.  In other words they would take away too many possibilities for the image (especially because they pinch/constrict the 'image potential/possibilities' in the center part of the canvas).

Two different configurations of text at the bottom.

Both have their merits, however, I am leaning towards a little more separation of the three text groupings.  I like the 'No' and 'Tay' being on one side and 'Shun' being on the other.  That being said, I really like 'Shun' being isolated at the bottom with 'No' and 'Tay' at the top by the face.

Once everything is adhered into place and primed with a layer or two of paint, it's time to add the copper color. 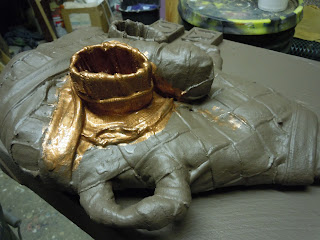 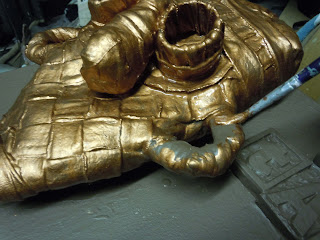 Prime the sides and the front....and PRESTO! another potential work for the exchange.

Slo-ganizer is another split text fragment piece.  Here are some example placements taken from a larger/longer exercise of moving elements around and seeing how they worked. 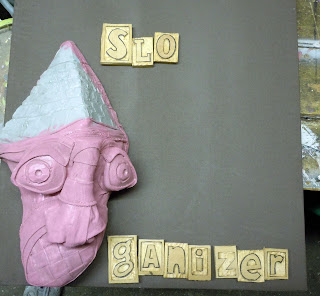 I find it fascinating how much the energy of a layout can change just by shifting something a few inches.  Scooting 'Slo' downward about six inches and lining it up with the eye of the Pyramid-Head Dude is a much more energized composition. 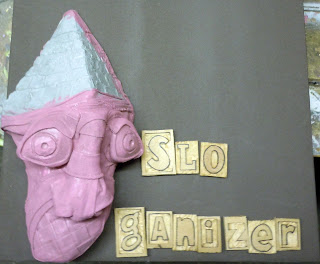 I like the nice corner-to-corner tension created by the text fragments at opposite ends. 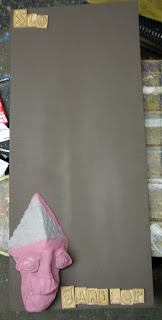 Hmmmm, not feeling it with this arrangement.....

The placement of the head and the text fragment 'ganizer' pinches the bottom too much and really doesn't generate any interesting dialog between the visual elements.

This one opens up alot of possibilities and may be a composition I return to with a future piece.  I am drawn to the visual tension created in the third layout slightly more, but not without some regret at not being able to also use this one.

Once the layout has been determined, it's time to adhere everything to the canvas and the hit it with a couple of layers of paint (to help seal the surfaces and help insure everything is stuck to the canvas (try opening a window that has been painted shut and you'll know what I am talking about)). 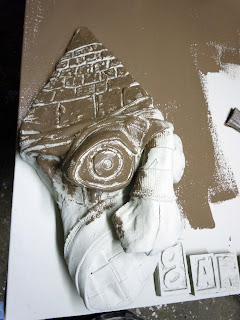 Now it is time to try out the blackened bronze surfacer from Sophisticated Finishes (a link to Triangle Coatings: tricoatstore website). 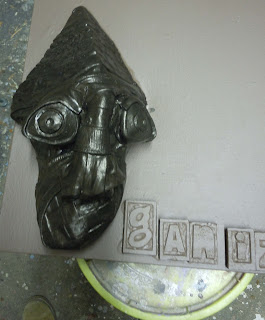 A couple close-ups.  I will probably apply another coat of the metallic surfacer and then hit it with a patina coat. 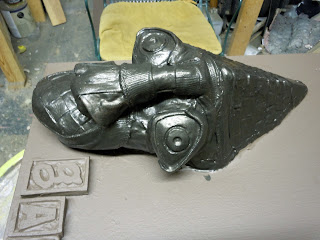 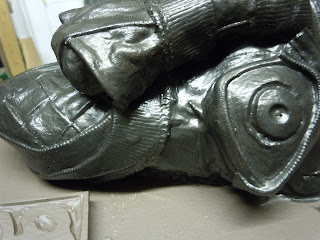 Here is Slo Ganizer ready to go off to a new/better home. 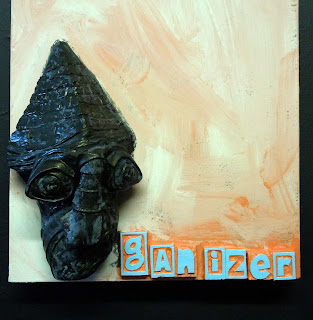