Recently, I came across a small stockpile of matchbooks.  Not quite the bonanza I hit upon a few years back, but still a nice little cache.

One of the matchbooks was for a place I had never heard of before called the Mapes Hotel in Reno, Nevada.  The artwork intrigued me enough to run a quick search on the internet and see if there was anything out there regarding the Mapes Hotel. 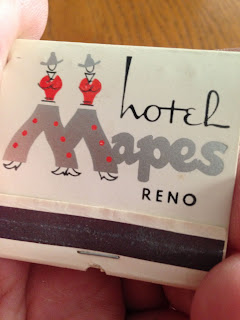 I was expecting perhaps a two or three sentence long blurb about the hotel, but much to my surprise, it has some historical significance.  The 12-story Mapes Hotel was the first skyscraper built in the Western United States after World War II.  It was a combination Hotel/Casino, which nowadays is standard practice, but back in 1947 was revolutionary. 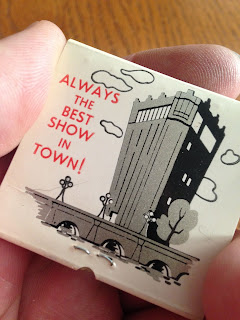 The two batches of things that jumped out at me were the list of celebrities who stayed and/or performed there (Monroe, Clift, Berle, Sinatra, Durante, and President Harry S. Truman) and more to the point at least one celebrity/entertainer Sammy Davis Junior (who performed at The Sky Room, but due to segregation laws, could not actually stay at the hotel).  As an added bonus, apparently during the 1970s the bellmen at The Mapes Hotel were paid a little sumthin' sumthin' by Joe Conforte to direct interested guest to the Mustang Ranch -a legal brothel owned by Mr. Conforte...

The takeaway is: Both prostitution and racial segregation were ok. 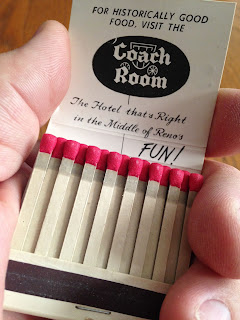 What I found even more intriguing than that (at least from the standpoint of making artwork) is that supposedly while enjoying a cocktail in the Lamplighter Bar,  Joseph "Tail Gunner Joe" McCarthy admitted to a reporter that he did not have a list of Communists in America.  This lead me to read about what was and was not revealed by the Venona Project -which was a counterintelligence program that started during WWII and was run during the Cold War.

Anyway, the information is out there for your reading pleasure.

Here are some of my initial sketches from a few of the matchbooks. 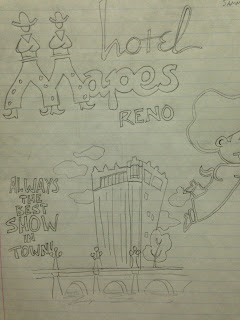 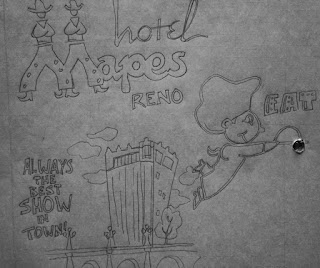 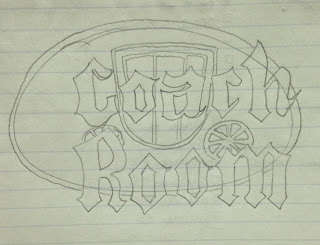 At this point I have no idea what the final product(s) will be, but with ingredients such as: a demolished hotel, high rollers, racial segregation, espionage, black listing, drunken power-hungry demagogues, prostitution, and the credo that "Only Experts Make Our Drinks", chances are it will be every bit as much of an emotional roller coaster ride as "If your baby more fat, order more size" or even "Joyous To The Eyebrow" for that matter...
Posted by Steve Banks at 9:33 PM