I have spent the last week cutting out cardboard with my X-acto knife and hot gluing fabric to a series of shapes that are rooted in abandoned roadside signs/billboards.  Here's my big bucket of glue sticks ready to be called into service. 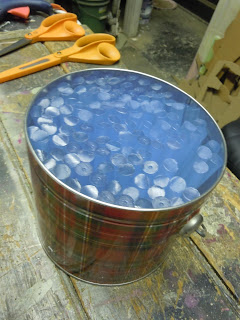 And here are some of the shapes (positive).

Here's just a few of the negative shapes/scraps which will probably also get wrapped in fabric and incorporated into some future painted construction...

I'm pretty sure the sign/shape in the upper left started out as two circles being cut out for some other something.  Whatever its genesis, it's been turned into a sign now.

The negative shape left over from these two seems like it will be something as well.

I had this circle left over and thought it might be interesting to pair it with some sort of base.  The circle would be the sign, the base would be what holds it up into the air.  It didn't take long to see the playful figure that the sign and base made.

Better cut out a few more so I can stack them to provide each one with enough structural integrity (thickness) to hold up to my working process. 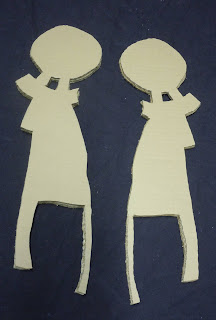 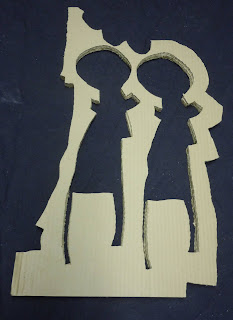 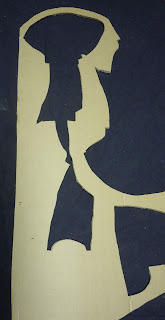 This shape below comes from a scrap/negative shape that I found so compelling, that I've turned it into a positive shape for future use. 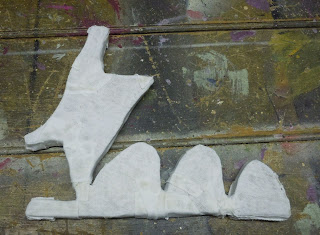 In order to cut it out two layers of the shape above from this scrap piece of cardboard, I had to space it out in such a way as to be left with an interesting negative negative shape. I just have to figure out what I'm going to do with the negative shape left over from the original negative shape.  It's kind of interesting too. 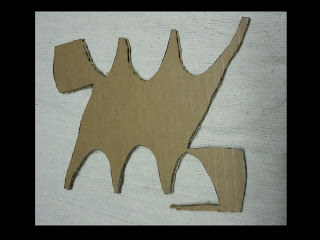 As an almost random footnote, I am thinking more and more about making a series of nearly white painted constructions similar to this one. 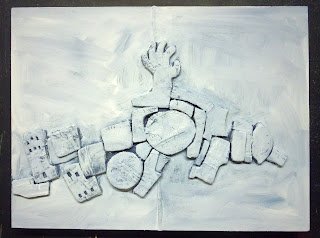 They will still (probably) feature painted line work imagery, but they will be much more heavily painted/hazed to make them closer to monochromatic.