Pow! I have bunches of things going on in order to get ready for 'Merican-Tastic!'  Which, although it is still 3 1/2 months until the promotional show (more on that in a future post), and 4 1/2 months until 'Merican-Tastic!' proper, I still have a ton of things to complete and so far, only one piece is totally done.  Not exactly where I would like to be as far as progress goes, but realistically this 'studio free-for-all' is why I got into being an artist in the first place.

Some of this new work will also have figures, dolls, dudes, whatever you want to call them.  I started to become interested in using the surface of the canvas as a base to build off of back in graduate school.  I messed around with building onto the surface for years, but my first real success came when I made Barbarians at the Gate back in 2004. 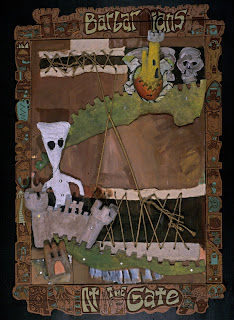 The final piece contains cardboard castles covered in fabric and then a coat of cement for texture, a figure made from paper, fabric, and chicken wire.  You'll also notice a couple areas of rope/stitching.  This is what I call a 'Tummy-Tuck' and it is basically something I will do to cinch-up areas of loosely stretched canvas to make them tighter.  Obviously, I could just re-stretch the canvas, but I actually like the visual contribution of the 'Tummy-Tuck', so if anything, I accentuate its presence.  Hey, if you can't do something well, at least do it with some panache!

Anyway, from time-to-time, when I have 'free-range studio time' (which basically means there are no looming deadlines/shows and I can totally be a slave to whimsy) I might hunker down for a week or two and either do a bunch of idea sketching/charting, or wrap cardboard squares with fabric while I watch old episodes of Newsradio, or just make a bunch of figures/dolls/castle-components.  I have a whole shelf of these things in my studio, and they basically sit around until I get an idea where I can use them.

Here are some examples of figures that have sat around a while (some of them for years), just waiting to be incorporated into something. 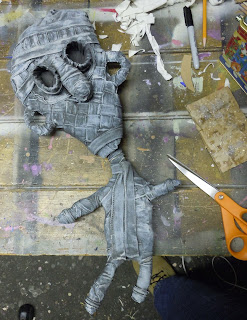 These two figures were actually going to be mounted on the surface of Visitors back when it only had two layers of painting/imagery (one was 'innuendo', and the other one was 'hyperbole').  Eventually, they got 'edited out' and I elected to paint a third layer (almost totally obscuring the first two layers).  In a future post, I will dig up some sketch book images (and maybe 'in-progress' images if I can find a way to resurrect deleted files....and by that I mean perhaps one of my tech savvy friends knows a trick to resurrecting dead files).  To show the work in progress.  Anyway, here is the final result for Visitors: 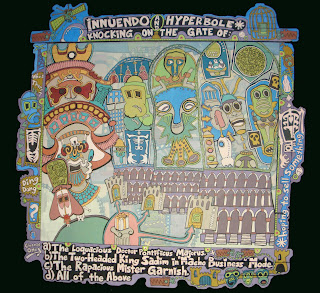 A couple more figures (or at least a face) that will someday find their way into some project or another. 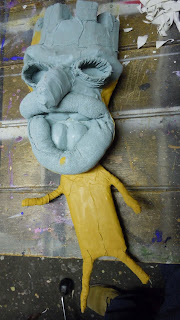 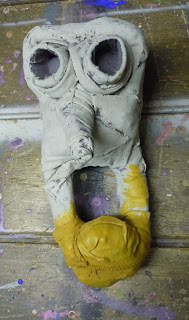 In fact, I think at least one of these was a reject from The Fantastico Mr. Bombastico (the face without a body) as seen below....... (as a side note, I spent waaayy too many hours carving out the word 'blah' on this piece). 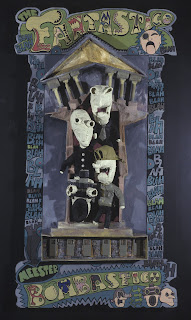 So what does this mean for 'Merican-Tastic!'?  It means I have at least one piece that is going to have some figures in it (actually I have three pieces planned that will have figures, but plans are subject to change (just ask the original 'innuendo' and 'hyperbole')).  Here is a sneak peek at the figures very early in their construction process. 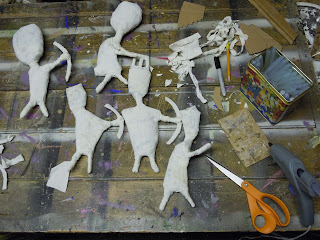 I have just roughed out the figures with newspaper, cardboard, and duct tape, and then covered them with fabric.  They still need to be primed, detail materials added and then finally painted.  I have started to carve the frame for this one (all-in-all I am looking at a minimum of 6 pieces with carved frames).  The title of the piece will be in a future post, but it is my first stab at a Hemingway 6-word story.

To wrap-up, I want to show some close-up shots from a piece called Tower of Janus which I initially created for PLAY back in 2010.  It has a mix of castles, carved wooden elements, and obnoxious chrome spray paint.  Enjoy! 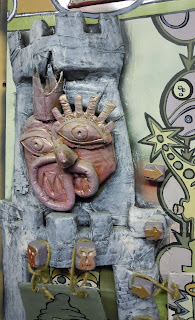 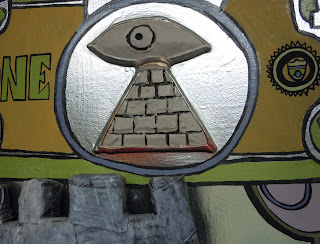 A shot of the two-faced god Janus on top, and the all-seeing eye on top of a pyramid on the bottom. 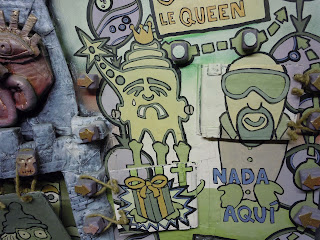 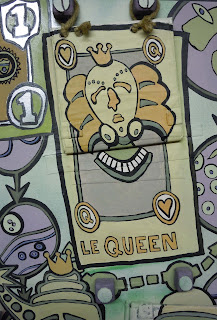 Tower of Janus was also the first time I used the 'flip-panel' device in a piece since a failed 20' long drawing in undergraduate school and before that, in drawings Mike Crawford and I used to make back in 3rd grade. I liked the result enough that it will appear again in some future work. 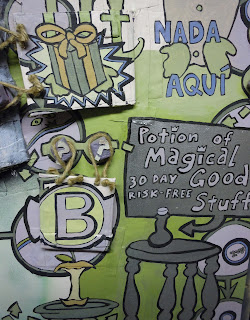 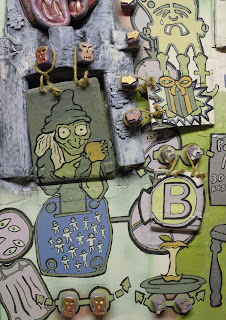 Ohh yeah! some of that chrome spray paint goodness!  If I haven't totally crushed your insomnia yet, you can find a description of Tower of Janus at: http://www.theartfeed.com/profile/show/27 (if you scroll down a ways, you will see an 'A' view and a 'B' view and some of the reasoning behind them) which ought to be just enough egghead jibber-jab to let you.....drift....off......to..........sleep.
Posted by Steve Banks at 11:06 PM