The Sacrifice.  Every now and then, a piece doesn't follow the typical path to destruction/reworking by being in my way one too many times in the studio.  Sometimes, they are just hanging on the wall being all nonchalant and arty.  Next thing they know, POW! they're dragged into the fray. 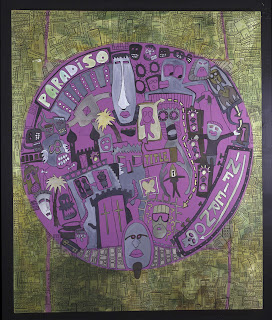 Metropolis was a piece I completed fairly early on in this direction of studio work.  I was just starting to embrace densely packed imagery in late 2005/early 2006 (but had not yet taken it to the 'layering' aspect).  I painted Metropolis during the heat of the Summer of 2006 (two years of living in Tallahassee, Florida without air conditioning has prepared me for some pretty sultry abuse).  Below, you can see the amount of line work I was able to lay down in roughly an hour. 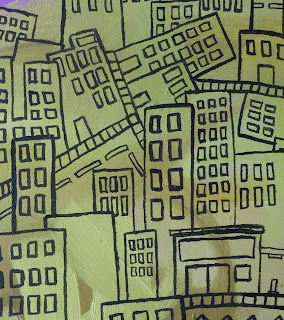 If you're thinking 'Wow? That's not much!', you would be correct.  I dug through some of my old sketch books until I found the sketch I used to make the center yin/yang portion of the image.  Since the drawing is in pencil and kinda smeared, I had to ramp-up the contrast in Photoshop to make it more 'readable' 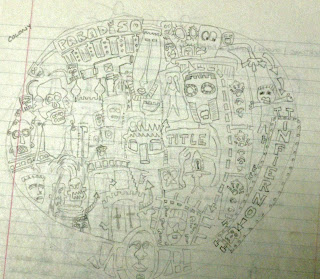 The final image didn't veer too far from the sketch (that is not always the case).  However, if you notice just to the upper left of the image is an early working title before I came up with Metropolis.

Anyway, Metropolis was hanging on the wall in my apartment this morning, and by the end of the day, it was Metropolis no more.

The first step was to haze out the original layer. 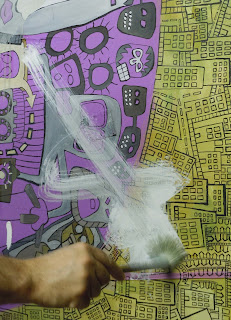 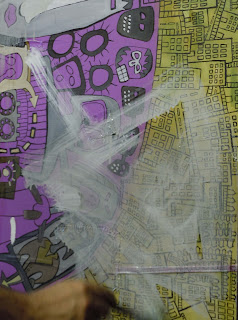 After applying a thin wash of dirty white and some excess paint thinner here is what it looked like by noon. 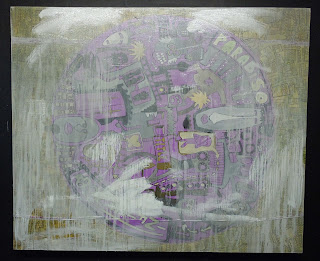 This evening I went back in and started adding some basic underlying color shapes for the next layer of imagery.  These shapes will get a great deal of black line work added on top of them (along with some more color).  There is a fantastically high probability that all of that will get hazed out with another layer of white before a final layer of imagery is added. 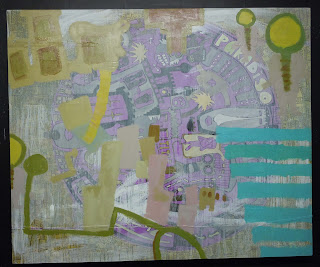 Look for the finished piece to be in Merican-Tastic! later this Summer......Happy Trails, Metropolis.
Posted by Steve Banks at 11:31 PM