Other Miscellaneous Non-Sense.  Although 11 years is probably not my record for the longest time between the start of a piece and when I get around to finishing it, it's gotta be close.  'Divided By...' is a piece I started in late 2000, or more likely, early 2001.  It is simply two masks separated by a long board riddled with nails (with the intention of looking like a 'divided by' sign). 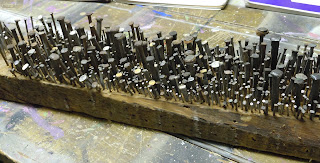 I would guess the board riddled with nails is probably 90% done.  And yes, it is another completely boring endeavor that if it were a paying job instead of my own personal studio work, I would quit that job in a heartbeat (surrounded by a cloud of obscenities as I walked out).  However, since it is my boring stuff, it is......actually...still fairly boring.  I guess the main difference is instead of hot glue gun burns, every now and then I land a top notch hammer-hit to my thumb (is compression contusions the proper term?).  The nail-studded board has sat untouched and unloved in my back storage space for over a decade, and I decided the time has come to finish the piece.

The general idea is something ominous/rough/complex/daunting (the board full of nails) that separates two people.  The challenge was never really wailing away on a bunch of nails, but to develop two masks that I could get excited about to kind of balance out the monotony of mindless nailing.

Here is the very start of 'The Queen of Fire and Ice Mask'. 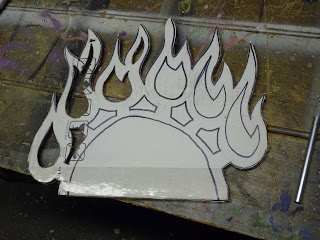 Both masks start out with cardboard and fabric.  Here is the lattice of fire crown that will be mounted on top of the mask. 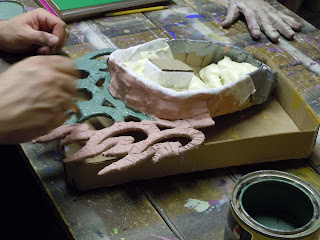 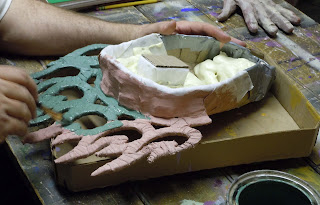 Wrap it all with a layer of fabric and then prime it a few times with paint.  You can already see some spray foam on the inside of the mask form.  The foam was that last little uninspiring bit that comes out of a spray can when you blast a whole bunch on a large Twinkie the Kid mixed media sculpture (hypothetically -of course!).  Notice how my hand is blurred in each shot to give you that 'action sequence feel'.

The other mask is constructed in a fairly similar fashion. 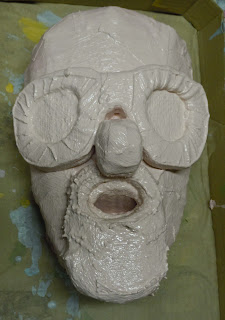 Once they are completed, both masks will get a rusting treatment similar to the 'Pharaoh' piece I mentioned in an earlier post.

Another project I finally tackled this past Friday was to set-up, and document in a non-exhibition environment, my piece Trojan Horse which was part of my Artifice, Artifact, and Allegory show this past Summer.  A friend of mine has a warehouse space that I was able to use.  It took several hours of set-up a clean up for roughly 60 seconds of shooting (I fantasize about having assistants for just this kind of project). 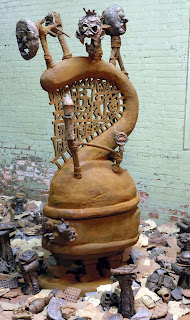 Since I already have shots under nice gallery lights, I wanted something a little harsher and more industrial.  Here is a shot from the show back in July. 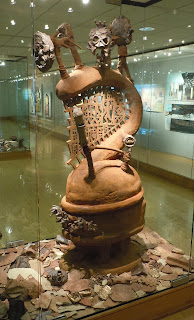 Although the gallery installation shots are warmer and more inviting, there is still some rough charm to the warehouse shots. 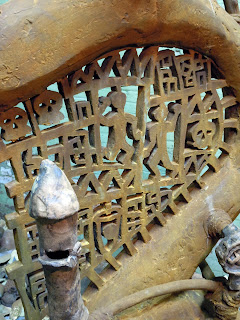 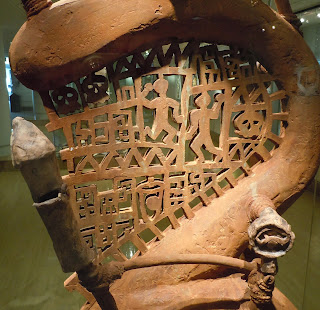 Detail shots of the center structure (the texture is a combination of Bondo and that rusting compound).  Also some shots of the debris (ceramic shards with imagery 'paddled' into the surface, ceramic food items, and Ionic columns, and masks). 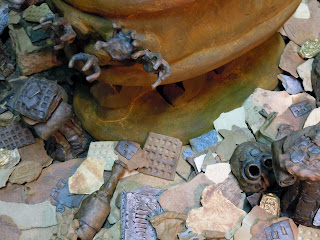 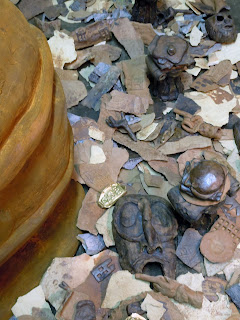 Several hundreds of pounds of clay went into making all of this detritus. 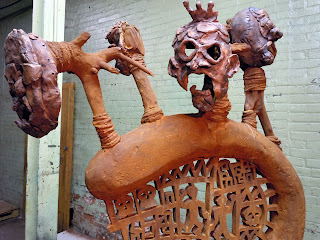 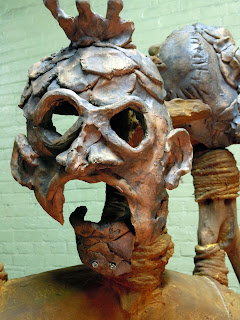 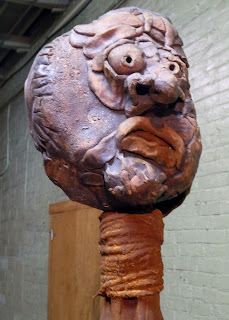 I was surprised when I unpacked this stuff and found about a half-dozen ceramic faces/masks.  I thought I had used all of them for my piece Passage in ELEMENTAL this past Fall at MidCoast Fine Arts' Gallery West.
Posted by Steve Banks at 11:05 PM