Partial Resurrection of The Gorilla-Fart Showcase

Old stuff into new stuff.  Many of the pieces being worked on for 'Merican-Tastic' have elements from earlier pieces.  I can't say this was an intentional choice made in 'the beginning', it just happens to be one of the things (image-making aspects) going on in my studio work at the moment.

Here is an example of an original piece that is now being reworked, or ripped-up and collaged into new work, that came from another show I had back in 2005 at Midcoast Gallery West called: 'The Gorilla-Fart Showcase'.  On the outside chance you haven't encountered the term 'Gorilla-Fart' while sampling the cultural finery this world has to offer, the term comes from a my undergraduate years in Missouri.  We had a fine drinking establishment that would 'offer' a drink which was just a random concoction of various hard liquors called a 'Gorilla-Fart'.  Since my show was basically a mix of recent work, and I didn't want to fall back on the tried and true 'Recent Work By...' show title, I went with something more....memorable?......visceral?......literary?......crass?

Anyway, this first piece is called The Exodus Triptych, and it is a chronicle of my departure from The South (Texas) and return to The Midwest (Iowa).  The three panels are (from left to right): The Three Faces of Mr. Wonderful in Cha-Cha Mode, Purgatory, and Soul's Arc: The Voyage Home. 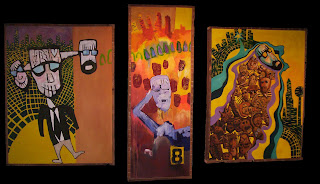 The wooden frames have long since been stripped off and turned into carved frames.  The Three Faces of Mr. Wonderful in Cha-Cha Mode is now part of Swan Dive Bomber (see earlier post post called Toy Pieces/Swan Dive Bomber).  I think Soul's Arc: The Voyage Home was completely (and unceremoniously) painted over.  Purgatory has been ripped up and has been re-incorporated into a new piece called Halcyon Days of Yore. 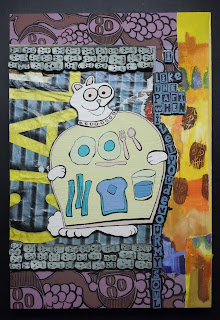 Halcyon Days of Yore is actually the merging of two older canvases with some new elements (the 'Bunny' and the text blocks).  It's also going to have a carved frame which I just started carving this evening.  Here are a couple of glimpses of the frame so far: 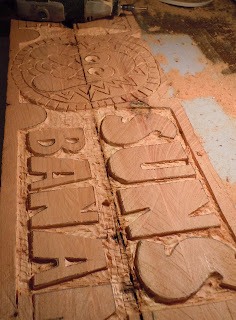 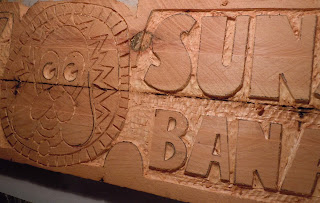 I have assembled the boards, and drawn and inked the images for the top and bottom portion of the frame.  The sides remain a doodle in a sketch book that needs to be flushed out more before it becomes 'carve-worthy'.

In the background of this image (from the opening night of 'The Gorilla-Fart Showcase') was a piece called Contraption.  Please note the people in the foreground were paid actors and not actually people having fun at one of my openings.

Here is a close-up of Contraption. 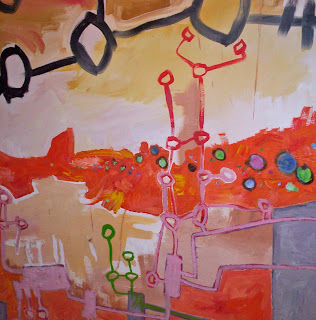 If you look at the base image of Babelmundo, you can still see some of the elements of Contraption peeking through. 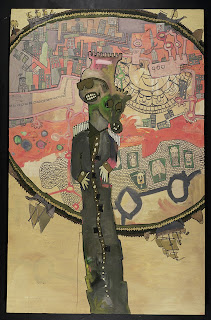 Babelmundo and Metropolis were the first two canvases where I started to uses thin washes of paint to separate dense layers of imagery.  My most prominent memory of working on Babelmundo was the time/detail I had to put into the four ships circumnavigating the globe.  Speaking of Metropolis, here are a few progress shots.  I have probably completed the line work for this layer and just need to add color. 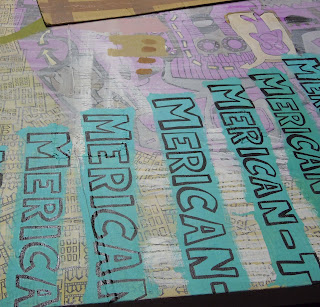 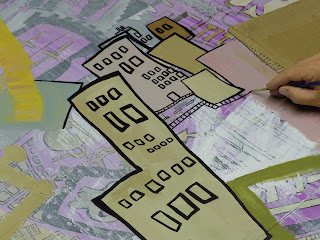 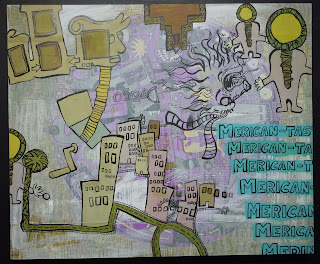 Once this new layer is 'done', the piece will go off to Heidi Hernandez to add the actual 'Merican-Tastic!' elements.
Posted by Steve Banks at 11:35 PM